Despite salvage efforts to remove fuel within the stricken capesize that grounded on a reef in Mauritius on July 25, fears are growing the vessel could break up and flood the island’s fragile ecosystem with even more oil

According to reports about 1,000 tonnes of fuel oil have leaked from the ship so far 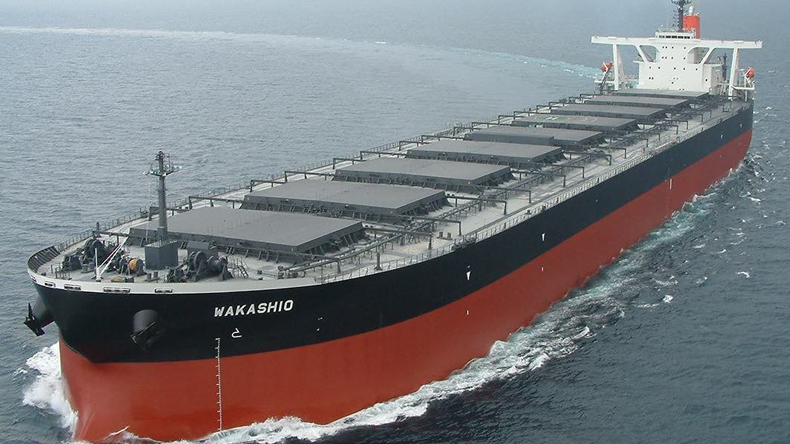 Source: Nagashiki Shipping High winds are reported to be hampering salvage operations, with forecasts for waves of up to five meters.

FEARS are mounting that more unsalvaged oil from the stricken capesize off Mauritius could seep into the ocean.

The vessel, which hit a reef off the east coast of Mauritius on July 25, was en route to Brazil from Singapore. It was not carrying cargo.

The bulker was carrying 3,894 tonnes of low-sulphur fuel oil, 207 tonnes of diesel and 90 tonnes of lubricant oil to make the journey.

Bad weather led to a breach in the starboard tank, which had been holding 1,183 tonnes of fuel oil, while the portside tank contains 1,850 tonnes of LSFO, according to estimates from the International Tanker Owners Pollution Federation.

According to a Reuters report, 500 tonnes has been salvaged.

The incident prompted the Mauritius Prime Minister Pravind Jugnauth to declare a state of environmental emergency. He told reporters there was a risk that the vessel could break up, the Guardian reported.

Although response teams had managed to stem the leak, they were bracing for the worst, he said. “The cracks have grown. The risk of the boat breaking in half still exists.”

High winds are reported to be hampering salvage operations, with forecasts for waves of up to five meters, further derailing salvage and clean-up efforts.

Oil was reported to have come ashore at several locations around the Baie de Grand Port, ITOPF said.

Nagashiki Shipping, the Japanese owner of the 2007-built, Panama-flagged bulker said that the tanker MT Elise was safely positioned alongside the grounded vessel, with the transfer of fuel oil underway through a hose connection. A second tanker remains on standby.

Containers of fuel oil have also been removed by helicopter.

The primary focus at this time is reducing the effects of the spill and protecting the environment,” it said, adding that attempts are being made to secure the vessel.

A further salvage tug arrived in the Port of St Louis, with additional personnel and specialist salvage equipment.

Mitsui OSK Lines, charterer of the vessel, said at the weekend it was sending a team of six to assist, while ITOPF said a technical manager and adviser were preparing to leave, with scheduled arrival on Wednesday.

Capesize bulker runs aground off Mauritius