Cruise sector could come to the aid of Beirut victims

The shipping industry has a good track record of providing humanitarian aid, and could deploy idle passenger vessels to help those left homeless

The cruiseship industry has been brought to a virtual standstill by the global pandemic, so why not reactivate some of the anchored ships to help those who lost their homes and livelihoods in the Beirut blast? 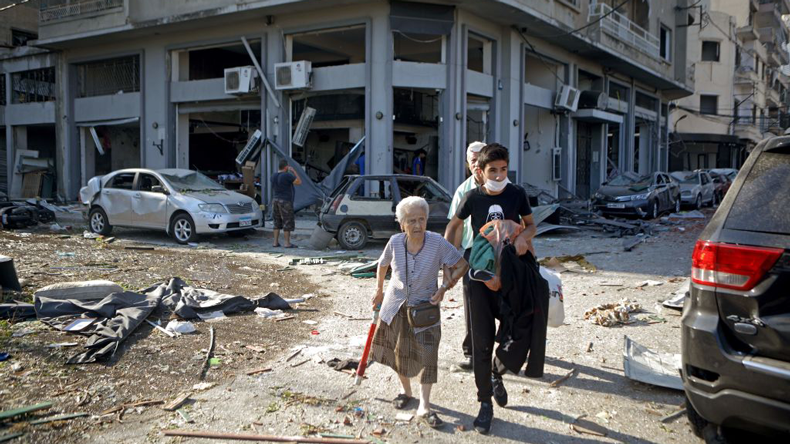 Source: Patrick Baz/AFP via Getty Images An elderly woman being evacuated from a blast-hit neighbourhood.

THE deadly explosion that flattened Beirut’s port and large swathes of the city has left tens of thousands homeless in a country that was already in economic meltdown and with few resources to cope with such a huge humanitarian crisis.

So could cruiseships be deployed to provide temporary shelter for those whose homes and businesses have been destroyed, and may be sleeping on the streets?

The world’s cruise fleet is currently idle and dozens are at anchor in the Mediterranean. Each is a small town in its own right, with the capacity to house and feed several thousand people when fully crewed and staffed.

Of course, there are any number of reasons why these ships could not be brought back in to service to help the people of Beirut. First and foremost, how they can be made coronavirus-safe?

Then sufficient numbers of crew, plus hotel, catering, and medical staff, would have to be employed. Ships' stores would need to be stocked up with food, pharmaceuticals and other necessities.

With the port badly damaged and closed, people presumably would have to be taken out to ships by tender. Indeed, there are many arguments against the emergency use of these passenger ships.

But shipowners have never lacked vision, ingenuity, or flexibility, while the industry also has a very good track record of coming to the aid of communities or countries struck by catastrophe.

During the Ebola outbreak in West Africa, for example, the big shipping lines continued to serve the region, and bring in relief supplies including provisions and medicines when many multinationals had fled and sent their staff home.

Earlier this year, MSC converted one of its passenger ferries into a floating hospital for victims of coronavirus.

In 2019, the Aponte-owned group provided a huge amount of support for the Bahamas when it was devastated by Hurricane Dorian. These are just a few of many examples of shipping’s willingness to provide aid.

The devastation of Beirut is much closer to home than most disasters. Some of the world’s top shipowners live nearby in Greece, Cyprus and Italy, while two of the biggest container lines, MSC and CMA CGM, are also headquartered in the region.

Most have been directly caught up in the catastrophe, with CMA CGM particularly hard hit.

Group chief executive Rodolphe Saadé has already visited Beirut to see the devastation for himself and console staff, two of whom have been seriously hurt, while many more have minor injuries. One CMA CGM employee was killed. The French line’s offices have been badly damaged, as have those of several other shipping companies.

Shipping lines have started to establish emergency hubs to ensure supplies keep flowing, and will continue to do so in the coming weeks and months as the port is rebuilt and the surrounding area redeveloped.

But more immediately, there is the question of whether the maritime community could do even more by providing somewhere to live for those whose houses and apartments have been wrecked or damaged.

One of the world’s leading cruiseship operators, MSC Cruises, must be wondering whether it could step in, but maybe the whole industry should pull together to help cover the cost of diverting a few unemployed cruse vessels to Beirut. There also many passenger ro-ro ferries in the area that could be drafted in to assist the.relief effort.

It won’t be an easy task, but this is also an ideal opportunity for shipping to draw attention to the vital role it plays at a time when the crewing crisis, and the plight of seafarers who are unable to get home, remains largely ignored by the outside world.