Seafarers on Liberia-flagged TW Hamburg were underpaid and suffered poor food provision, according to the Australian Maritime Safety Authority. Meanwhile, the shipmanager told Lloyd’s List the complaints were filed by 10 Burmese crew who had been on strike on board since March

Disembarked Burmese crew are now said to be stranded in Brisbane due to the lack of flights to Myanmar, with all expenses covered by the shipowner and shipmanager 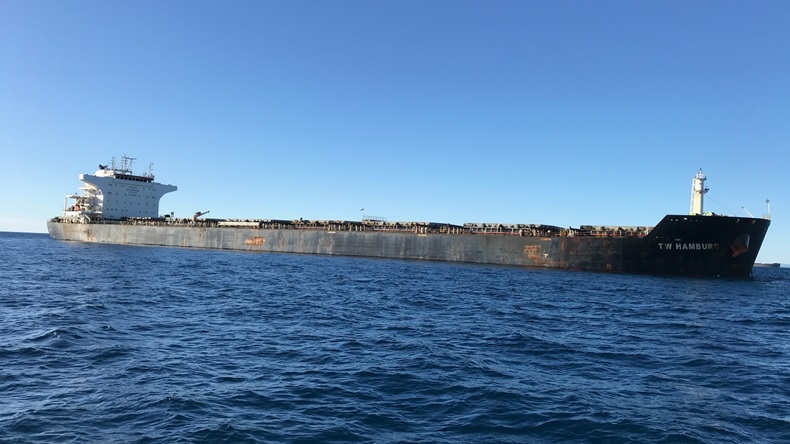 TW Hamburg left Gladstone on July 29 and is now on its way to Tangshan, China, according to vessel tracking data.

A LIBERIA-flagged, China-owned dry bulker was banned from entering Australian ports this week, concerning accusations of wage exploitation made by a group of Burmese seafarers on board, according to the local maritime authority and the shipmanager.

The Australian Maritime Safety Authority put a 12-month ban on TW Hamburg, having boarded the vessel in Gladstone, Queensland on July 24, according to a press release.

It said that some seafarers claimed they had been underpaid, with evidence collected by the inspectors showing they were owed about A$42,000 ($30,160).

“Crew were found to have duplicate seafarer employment agreements with a difference in wages between the two agreements of about 25%,” said AMSA. “They were being paid based on the agreement for the lower amount.”

The inspection also found that the quantity and quality of food provision was below the Maritime Labour Convention’s standards, while the ship sustained poor hygiene practices with a filthy galley and fridges.

The crew have now been paid their outstanding wages and are being repatriated, according to AMSA.

The vessel left Gladstone on July 29 and is now on its way to Tangshan, China.

When approached by Lloyd’s List, an official from the shipmanager said the complaints were filed by 10 Burmese crew members, who had been on strike since March after having some conflicts with their Chinese colleagues on board. The vessel had 12 Chinese seafarers, including the captain, out of a total crew of 22.

“The Burmese crew have refused to do any work, including cleaning, on the ship since March,” he said. “And because Myanmar is under lockdown because of the coronavirus outbreak, we could not change them to solve the issue.”

Out of the 10 Burmese nationals, two had contracts which expired in April with the rest due in October.

The official also claimed that his company was not aware of a second hiring agreement at lower payment rates until AMSA’s notification.

“We authorised our manning agent in China to sign those Burmese crew and were only told recently that they had a separate agreement with four local manning agencies that paid them less,” he said. “Neither the seafarers nor the manning companies showed them to us previously. But AMSA would not listen to our explanation.”

The shipmanager is now seeking a settlement with the Chinese manning company, which is believed to have subcontracted the hiring work to the Burmese agents, according to the official.

The person added that nine of the 10 Burmese crew had requested repatriation and his company had agreed to cover all the expenses.

The disembarked crew are now stranded in Brisbane due to the lack of flights destined for their own country, however.

“We’ve applied for the rescue flights from both Singapore and Sydney that can send them back home,” said the shipmanager official. “As of today, we are still waiting for the confirmations from the local authorities.”

AMSA acting general manager for operations Michael Drake said his authority had prohibited 16 ships from Australian ports since 2014, the majority for failing to pay seafarers in a timely manner and in full.

On Monday, another Liberia-flagged bulk carrier Agia Sofia, which is owned by Greece-based owner Diamantis Diamantidis, received a six-month ban after the seafarers on board were found to have been underpaid.

“Any ship that arrives in Australia under such conditions can expect the same treatment. We will not tolerate the exploitation of seafarers in our waters,” said Mr Drake.