Few positive signs amid situation described as ‘inhuman’ and ‘farcical’

Nearly a month on from a UK-led summit aimed at finding an international solution to the issue of crew changes, there has been little in the way of forward progress and some countries have tightened rules again as new coronavirus cases emerge 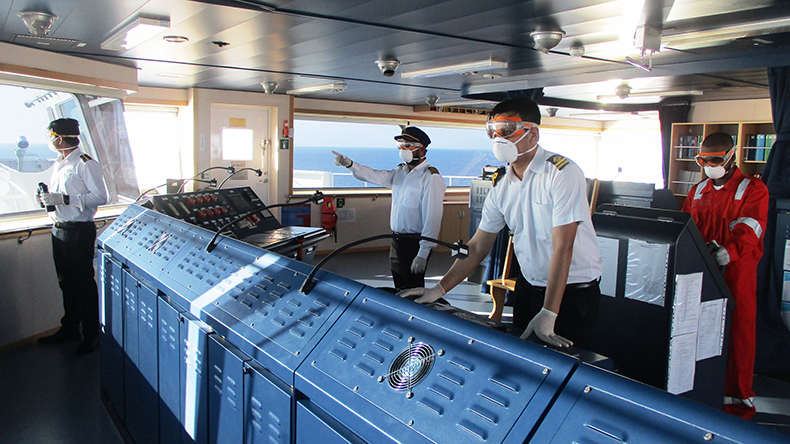 Society is turning a blind eye to the plight of seafarers, according to Captain Panagiotis Tsakos, founder of Greece’s Tsakos Group.

EARLIER this month industry officials welcomed a commitment by 13 governments to lead a global effort to open up borders for seafarers and increase the number of commercial flights to expedite repatriation efforts.

However, with no formal timeline in place to accompany the commitments, there were question marks about when we would see actual change.

As regular readers of the Lloyd’s List crewing crisis coverage will be aware, there have undoubtedly been some positive outcomes in the past few weeks, particularly in Europe.

Denmark’s government recently took action by agreeing to apply visa rules in a way that would allow seafarers to obtain a visa to enter or travel through the country so they can sign on or off duty locally or in neighbouring countries.

Danish Shipping chairman Jacob Meldgaard told Lloyd’s List the model would allow about 500 crew changes per week and crew could start to use Denmark as a hub to travel to Bremerhaven, Rotterdam or other places their ships have called.

Also in the past week, a group of seafarers that sent in videos as part of the Lloyd’s List campaign to give stranded crews a greater voice in the midst of the crisis were able to disembark at Felixstowe after months being stuck on board.

This followed news that Dubai, another important crew change hub, has relaxed certain restrictions so ships can rotate seafarers in Dubai port and anchorages, provided they meet local health guidelines and have scheduled flights in the United Arab Emirates.

But these are some of the few bright spots to be seen in a situation described as “inhuman” by Captain Panagiotis Tsakos, founder of Greece’s Tsakos Group, who added that it is shipping’s “most acute problem” for 50 years.

He said that society is turning a blind eye to the plight of seafarers, and warned that the knock-on effects will be seen in the slowing of global trade and the gradual dismantling of the global economy.

“Cargoes will cease to be transported, raw materials will not be enough, industries will close, jobs will be lost, homes will starve,” he said. “And all this because governments are reluctant to take measures that, by facilitating the movement of seafarers to and from their ships, would ensure the unimpeded flow of international trade and peoples’ well-being.”

Intercargo also delivered a strong condemnation of the current situation, describing it as reaching “farcical proportions”. Chairman Dimitris Fafalios said Seafarer Employment Agreements had expired for about 35% to 40% of seafarers currently on ships.

A technical manager, arranging for the replacement of a ship’s entire crew, describes the ‘nightmare’ of trying to find a port where seafarers could disembark and catch flights home

Of these, 10% had served between 12 and 17 months, far beyond the nine month industry standard and in excess of international maritime labour convention limits.

Meanwhile, Hong Kong has tightened health and safety rules and halted all crew changes for non-cargo operation vessels after mounting pressure on the government in response to a rising number of coronavirus cases there.

Shipping associations had already advised their members to suspend crew changes after several cargo ships were reportedly quarantined in local anchorages after positive tests on board and more seafarers arriving have been found to be carrying the virus.

The move represents a setback to the previous relaxation in early June, when crew of cargo ships calling for other purposes — such as bunkering, supplies, sale and purchase delivery, repairs, docking and surveys — were largely exempted from the quarantine requirements.

The Maritime and Port Authority of Singapore said it is also taking into consideration reports of a rising number of coronavirus infections being found among signing-on crew.

The categories for priority will include crew with expiry of contracts which flag states are not extending further, Singapore-registered ships and crew sign-offs, it said.

MPA added that Singapore had seen three cases within one week, where crew members scheduled to sign-on to vessels were found to have tested positive for coronavirus upon arrival and this had hindered the crew change process.

Lloyd’s List has set aside its traditional awards portfolio for 2020 to recognise the exceptional circumstances in which the maritime industry has found itself as a result of the pandemic.

One of the new award categories, Provision of Seafarer Wellbeing, recognises the unique hardships endured this year by those who have played an outsized role in the pandemic, keeping global trade lanes moving in the face of sustained physical and mental burdens.

For further information on the revamped awards programme, follow this link.

For entry guidelines, categories and criteria and to submit your entry, follow the link here or in the banner below.