Knut Ørbeck-Nilssen believes there is a new spirit of collaboration abroad in what is normally considered a highly fragmented industry, and a desire to harness every technological means available to overcome the obstacles that Covid-19 and its consequences have thrown up 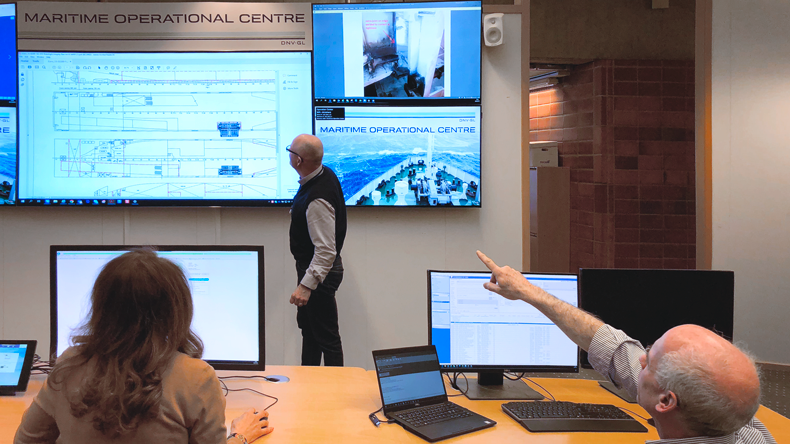 Source: DNV GL DNV GL has seen a surge of interest in remote surveys during the Covid-19 pandemic.

EVERY cloud is supposed to have a silver lining and for DNV GL’s chief executive Knut Ørbeck-Nilssen, the silver lining of the Covid-19 pandemic is what he refers to as shipping’s renaissance.

There can be no doubt Covid-19 has been bad for shipping, with cruising halted, container lines badly affected by lack of cargoes as both the supply and demand sides of world trade have been affected by lockdowns and factory closures, and tankers and bulkers similarly affected.

Lack of air services and travelling restrictions have prevented the movement of crew and specialists such as class surveyors and OEM (original equipment manufacturers) repair and service personnel.

So, what is the renaissance to which Mr Ørbeck-Nilssen is referring?

The answer according to the man himself is a new spirit of collaboration in what is normally considered a highly fragmented industry, and a desire to harness every technological means available to overcome the obstacles that Covid-19 and its consequences have thrown up.

As examples of the collaborative spirit, he cites the industry initiative led by the International Chamber of Shipping to raise a $5bn fund for R&D into future technologies aimed at decarbonising shipping. Although this predates the pandemic, it remains important for the future as the decarbonisation targets are not going to disappear even if International Maritime Organization meetings have been temporarily postponed and owners are struggling financially.

Another important collaborative effort mentioned by Ørbeck-Nilssen is the steps taken by the IMO, ILO and industry bodies to break the deadlock over crew transfers that has seen thousands of seafarers effectively trapped on board ships and unable to be exchanged after their tours of duty.

Collaboration has been growing as an initiative announced in early June highlights. This is by some ten organisations representing owners, ports, pilots, suppliers, shipbrokers and port agents and is a call to action to develop smart ports.

The group points out that only 49 of the 174 IMO member states have functioning digital port community systems, while the others continue to struggle with larger reliance on personal interaction and paper-based transactions. The group has identified nine areas needing action including the long-heralded but yet to materialise widespread use of electronic bills of lading.

Mr Ørbeck-Nilssen said he was encouraged by the initiative shown in using modern technology to overcome the obstacles created by the pandemic. Despite conventional shipping events and exhibitions having been widely cancelled or postponed, the dissemination of knowledge and ideas has not been choked off and may even have increased. The use of webinars and online conferences and meetings has increased exponentially, a development that has surprised many industry observers.

People have adapted quickly to new ways of working and been able to find ways to meet the challenges. For DNV GL this has been most evident in a surge in remote surveying and employees working from home and travelling less. Remote surveys are not new for DNV GL as it rolled out the service to all ships in 2019 after piloting the idea from June 2018. More than 17,000 have been carried out so far, but in the latest crisis the numbers have surged by over 30%.

The take-up is expected to rise further, especially as newer vessels are being built with more sensors and software across many items of equipment. This will make conducting surveys of equipment easier and, coupled with the use of drones, reduce the need for physical surveys by inspector. However, Mr Ørbeck-Nilssen does concede that there will be times when a physical inspection is necessary and more broadband width will be needed for ships and companies to take maximum advantage of the potential benefits that are beginning to emerge.

Shipping learns the value of collaboration