Marine fuel market must prepare for a new ‘normal’

A new white paper produced by Argus Media in partnership with Lloyd’s List assesses the outlook for the marine fuels market in 2020 and beyond. Find out how to download your copy below


With three shocks in the space of three months, the international marine fuel market has experienced significant turbulence already this year. Even if the worst of the coronavirus pandemic subsides in the coming months, the demand side outlook remains murky

Source: Shutterstock.com The fuel market for the shipping industry has been in flux throughout 2020.

INTERNATIONAL marine fuel markets have been subject to three waves of turbulence this year.

First, in January the International Maritime Organization capped marine fuel sulphur emissions content at 0.5%, down from 3.5%.

In February, petroleum demand started to slide on the back of shutdowns in response to the cornavirus backdrop.

Despite a mid-April 23-nation Organisation of the Petroleum Exporting Countries-plus alliance agreement to reduce crude oil production, crude prices crashed as the coronavirus backdrop intensified, prompting an oil glut and oil tank storage to fill up.

But VLSFO losses outpaced HSFO losses and the VLSFO over HSFO premium narrowed. According to traders, US Gulf VLSFO stocks grew from mid-March to mid-April with a fair amount of low-sulphur vacuum gasoil making its way into the US Gulf VLSFO blending pool. 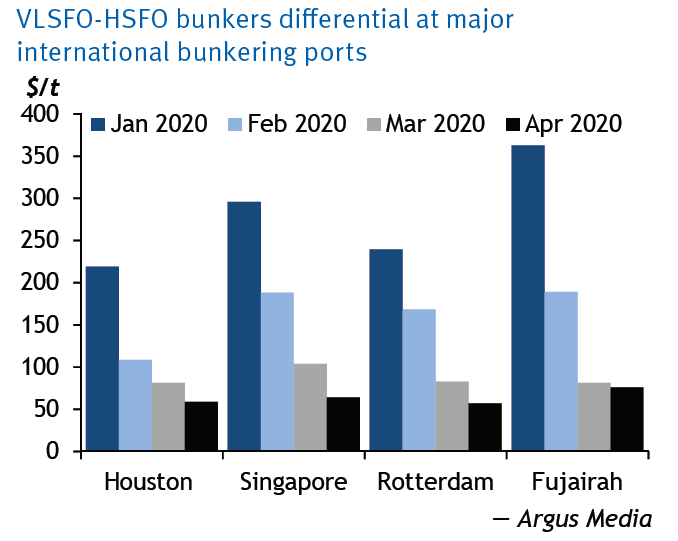 Demand for 0.5% sulphur VGO as a fluid catalytic cracker feedstock for the production of gasoline and diesel was down on coronavirus-related supply shocks. As a result, the Argus-assessed US Gulf VLSFO–LS VGO premium held at over $5 barrel during the one-month period, with the premium spiking to as high as $8-9 per barrel.

With crude collapsing in the second half of April, the VLSFO–LS VGO premium narrowed and then switched to a discount.

But as road fuel demand is still muted, the premium could return and expand soon. In addition, international VLSFO availabilities and delivery schedules were unpredictable in January, with suppliers still getting their footing after the start of the IMO 2020 regulation.

But from February on, VLSFO availabilities and barge delivery schedules stabilised. VLSFO bunker supplier competition picked up. Thus the VLSFO-HSFO bunker price premium narrowed from $296 per tonne in January to $64 per tonne in April in Singapore, the biggest bunkering port in the world.

The VLSFO-HSFO premium drop weakened shipowners’ incentive to invest in scrubbers and lengthened the return on investment period for shipowners who had already invested in scrubbers.

In addition, as suppliers cleaned out their storage tanks and barges from HSFO to make space for VLSFO prior to the IMO 2020 regulation, HSFO became difficult to source in some international ports, prompting shipowners with scrubber-fitted ships to plan spot purchases carefully.

The above is an excerpt from a new white paper titled ‘Four months into 2020: marine fuels curveballs and expectations’, produced by Argus Media in partnership with Lloyd’s List.

To read more about the outlook for the marine fuels market in 2020 and beyond, download your copy by following this link.