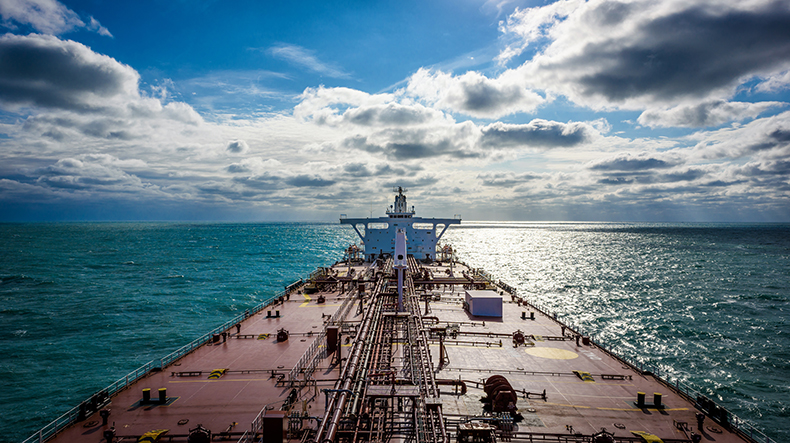 Source: G Valeriy/Shutterstock.com At least 18 very large crude carriers laden with Saudi crude are heading for the US Gulf.

THE US oil market is facing a perfect storm as it trades in negative territory for the first time in history with around 36m barrels of Saudi crude sailing for the US Gulf, and most due to arrive within the next four weeks. 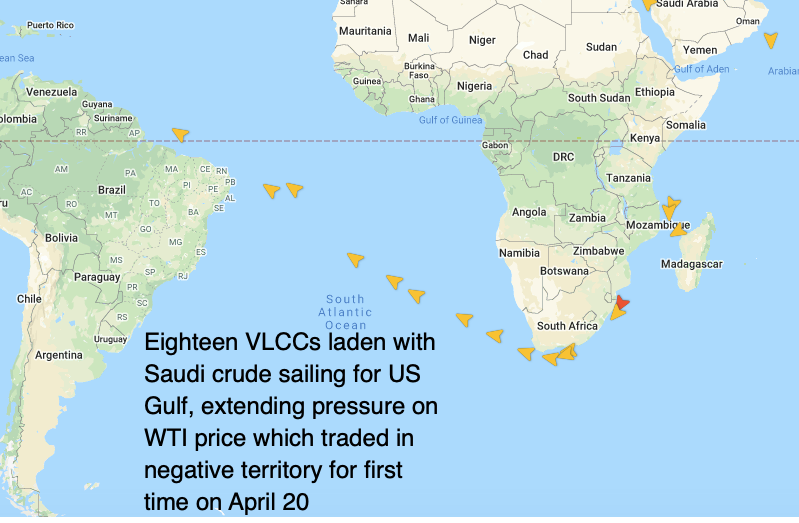 At least 18 very large crude carriers laden with Saudi crude — the majority chartered by the kingdom’s shipping company Bahri — are tracked on the water to the US Gulf, according to Lloyd’s List Intelligence data.

The tankers are a legacy of Saudi Arabia’s now derailed March pledge to flood the world with crude, which first triggered the collapse in oil prices.

Bahri chartered 25 VLCCs in less than five days in early March, igniting sky-high deals for tankers over the first quarter of the year as demand for tankers outpaced supply.

The kingdom’s national shipping arm paid a rate equivalent to a record $350,000 per day for one VLCC, Sea Splendour, at the height of the spike, which is now off South Africa’s eastern coast and signalling the US Gulf as its next destination.

The VLCCs’ arrival is likely to extend pressure on the West Texas Intermediate oil price in June, as the May contract traded as low as minus $40 per barrel yesterday.

The chaos continued today with the May contract, which is due to expire, returning to minus $4 per barrel before ending up to minus 29 cents a barrel on the CME Exchange at 0900 BST.

The historic and unprecedented move to negative territory reflects the lack of commercial storage of Cushing, Oklahoma, the land-locked, physical delivery point for WTI crude. Storage is forecast to be full within weeks, leading to the negative May contract.

June’s contract is trading at just over $20 per barrel, well below the $50 per barrel shale producers providing 63% of US oil need for profitability.

The Saudi crude influx pits one of the cheapest global crude producers against some of the world’s most marginal producers and represents a geopolitical squeeze for the Trump administration. 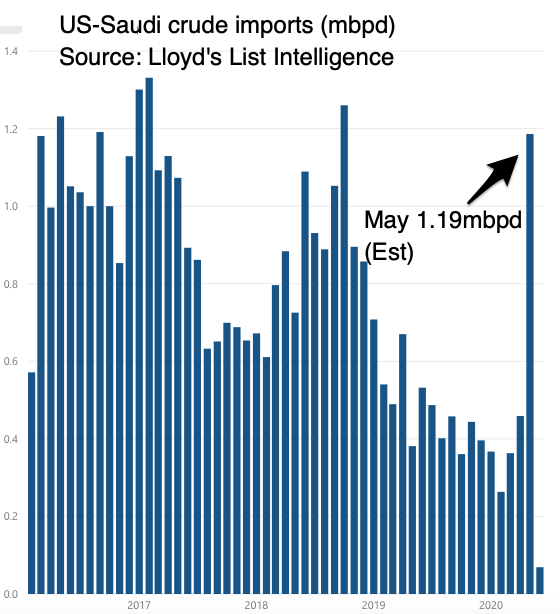 The first of the 18 VLCCs is due to arrive within 10 days and the remainder over May, further pressuring the June contract which expires on May 19. In addition to the rising crude surplus in the Permian basin, there will be an excess of oil at the US Gulf, where most of the country’s refineries are based. Some 1.19m barrels per day is estimated to be arriving in May from Saudi Arabia, the most since April 2018, according to Lloyd’s List intelligence.

Saudi crude will comprise nearly a quarter of US imports next month, compared to less than one-eighth of volumes arriving in January and February.

More broadly, the WTI price rout signals the end of US energy independence as the coronavirus-led demand crash cripples the shale producers that transformed crude and refined product seaborne trades during the past four years. Indebted shale producers have $30bn in debt maturing in 2022, and about $20bn in 2021 with widespread bankruptcies now forecast.

The massive oversupply of crude in the US and negative oil price is the most dramatic indicator of how steeply demand for land and air transportation fuels has fallen with global crude consumption now estimated to be a third lower during the past few months.

It also signals that the 9.7m bpd in production cuts agreed by the Organisation of the Petroleum Exporting Countries and its allies is not sufficient to stabilise the oil price.

Tanker owners are banking on demand for floating storage of crude and refined products to buoy rates in the face of these crippling figures.

The crude oversupply facing US-produced crude — now estimated at 2m bpd — is difficult to redress via floating storage. Shale oil needs to be piped or trucked from the Permian basis to the US Gulf, in addition to the other costs for floating storage.

President Donald Trump failed in an attempt to persuade Congress to fund the purchase of shale oil for the country’s Strategic Petroleum Reserve to help alleviate the surplus and commercial storage shortfall. That has led to speculation of another option to lease space in the SPR.

Current Oklahoma commercial stocks totalled 54.9m barrels for the week ending April 10, according to the US Energy Information Administration.

Stocks peaked at 68m barrels in April 2017, although this reflected the lack of pipeline capacity to ship crude for export to the US Gulf, rather than any fall in demand.