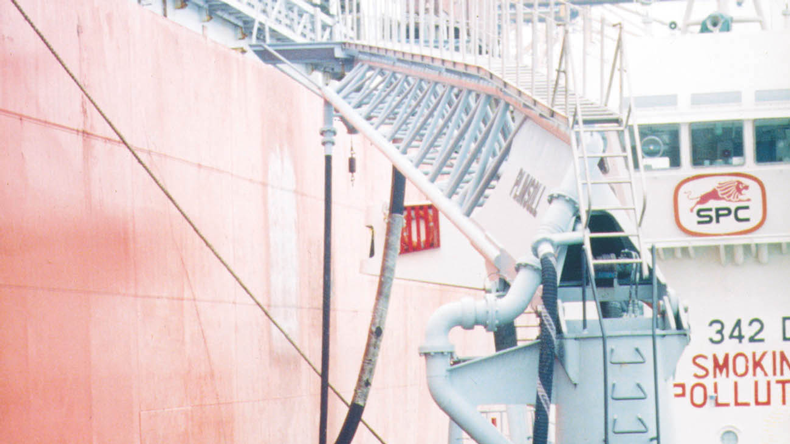 Bunkering in Singapore: The port’s marine fuel sales rose in March to 4.3m tonnes, up by 442,600 tonnes from February.

ASIA-Pacific bunker markets have been subjected to three waves of turbulence this year.

It began with the International Maritime Organization regulations that capped the sulphur content in marine fuels at 0.5% at the start of 2020, followed by the sharp crash in crude prices because of the battle for market share between Saudi Arabia and Russia, and the continuing Covid-19 outbreak.

However, the pandemic has yet to have a significant impact on marine fuel sales in the bunkering hubs in Asia-Pacific. While there has been a drop in overall bunker sales since the start of the year, this has been attributed to a weakness in seasonal shipping activity and higher volumes in January than usual, following the transition to very-low sulphur fuel oil bunkers from January 1.

Singapore port’s marine fuel sales rose in March to 4.3m tonnes, up by 442,600 tonnes from February and up by 231,400 tonnes from a year earlier. An increase in sales also occurred in China, the United Arab Emirates and Japan. Bunker sales in Zhoushan, China’s largest bunkers hub, also increased by more than 70,000 tonnes to 348,500 tonnes in March from February.

Fujairah bunker suppliers even reported an increase in sales during March over the previous month, despite various restrictions imposed by port authorities, including bans on passenger travel and crew changes. Japanese bunker suppliers said they managed to secure higher sales in March than in the previous two months.

China exported 1.56m tonnes of fuel oil during January-February, up by 245,000 tonnes, or 18.6% higher from the same period a year earlier. The country allowed fuel oil exports through the bunkers sector in December 2019. March volumes are estimated higher than February, as refineries want to clear stocks further.

China’s refineries sell fuel oil to bunker suppliers at a cost lower than that which suppliers import from the international market, mainly Singapore, allowing them to cut bunker prices to a lower level to boost volumes. However, fuel oil exports from the Middle East Gulf to east Asia have been falling, creating an oversupply in Fujairah storage.

Fuel oil tanks are brimming with virtually no storage available to rent. Coupled with expected sluggish bunker demand, ample supplies of IMO-compliant marine fuels could heavily weigh on ex-wharf, and delivered bunker premiums in late April and May. 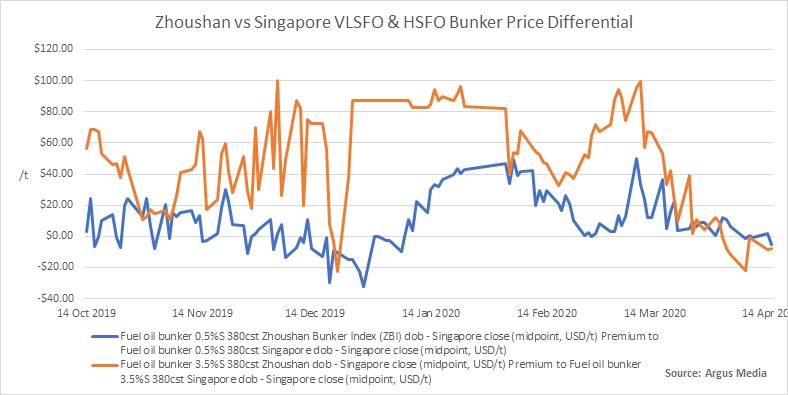 The VLSFO bunker spread of Zhoushan versus Singapore prices fell to $13.60 per tonne in March from $23 per tonne in February, helping suppliers to gain market shares from other ports, despite the coronavirus impact. The spread fell to zero on March 30 from a peak of $50 per tonne in early March. 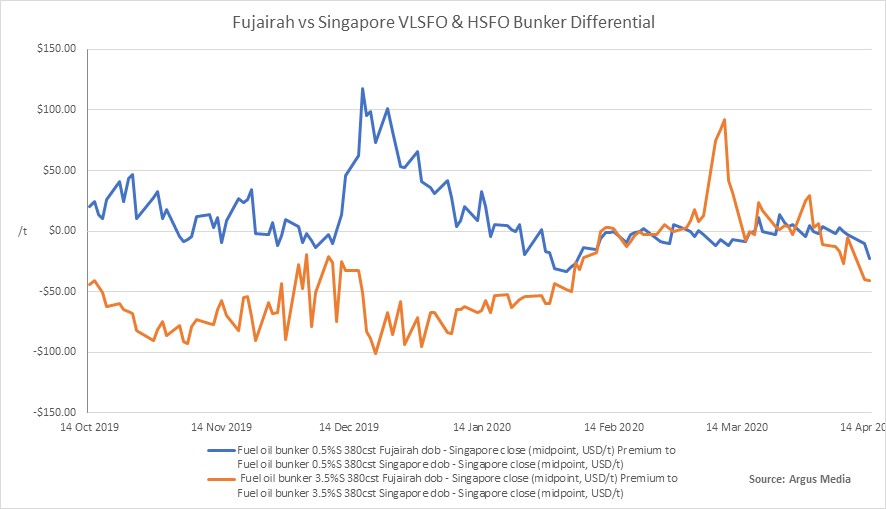 The VLSFO spread between Fujairah and Singapore prices rose from a discount of $33.54 per tonne on February 3 to a premium of $2.50 per tonne on April 7.

However, the short-to-medium-term outlook is bleak.

Repercussions are already starting to be felt because of the reduced demand caused by the pandemic and the shock in crude prices.

Japanese suppliers said they were increasingly concerned about a further dip in demand in April, as commercial vessels’ activity may be affected by Japan declaring a Covid-19 state of emergency on April 7 until May 6, covering seven prefectures with a high population density and industry complexes.

The impact on the economy from the state of emergency is not yet clear but limiting movements of people and businesses will reduce Japan’s demand for imported items. Consumption of oil products, for example, are forecast to dive, sending the country’s refinery runs lower and slashing tanker voyages to import crude.

The lockdowns and similar measures in several key industrial locations could also affect exports from Japan. This has particularly affected vehicle producers, forcing some of the assembly factories to halt production. Bunker suppliers also indicated that requirements from car carriers were already weakening.