Consortia Block Exemption Regulation extension is the only bright spot amid continued uncertainty in the containers sector, while shipbrokers cash in as oil prices drop to 20-year lows 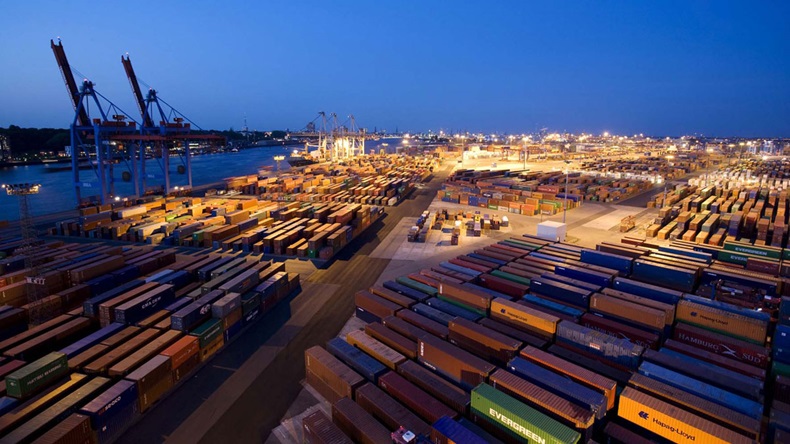 THIS new weekly briefing provides sector-by-sector coverage of the coronavirus outbreak and its impact on shipping, direct from the Lloyd’s List team. Follow the links within the text to the relevant news items in each market segment.

Did you miss our webinar? Last week, Lloyd’s List and Lloyd’s List Intelligence experts joined a special webinar examining the impact of the coronavirus pandemic on the shipping sector and answered questions from a global industry audience.

It looked in depth at key areas including the macro outlook on the economic shock that the outbreak is likely to deliver, as well as what the latest Lloyd’s List Intelligence data is telling us about idle tonnage, floating storage and average miles per day across the fleet.

You can now access the webinar, featuring our data-led analysis of the key maritime markets, via this link.

The container shipping sector received one bit of good news in the past week, but just the one.

The confirmation by the European Commission that it would, as expected, extend the Consortia Block Exemption Regulation for a further four years was welcomed by carriers, who said the ability to form consortia to share vessels resulted in efficiencies for carriers and better use of vessels’ capacity.

Unsurprisingly, the news was met with a cooler response from shippers and forwarders, who said the commission had failed to listen to their evidence. The move, they said, was disappointing at a time when supply chain companies were doing all that they could to keep trade moving during the coronavirus crisis.

Ports and container terminals, which form the interface between sea and shore-based transport, will be critical to keeping that cargo moving. Hamburg last week went as far as offering to defer lease and fee payments for its port community but elsewhere in the world the situation is becoming more difficult.

In Europe, port groups have called for government support to maintain supplies of essential goods during the coronavirus outbreak. In the UK, there have been calls to prioritise protection of port workers as they perform an essential service in ensuring goods enter the country.

In the Philippines, where Manila has been placed into a month-long quarantine to help prevent the spread of coronavirus, International Container Terminal Services Inc has warned that a growing backlog of containers could soon affect port operations.

Perhaps worst affected, however, is India, where a national lockdown imposed at short notice has led a number of ports to declare force majeure. While many ports remain open, operations have been severely disrupted by a lack of manpower to handle ships and cargo work.

A lack of hinterland connectivity is also causing severe bottlenecks within the ports. A shortage of available truck drivers has increased dwell times for cargoes in all India’s ports. The closing of interstate borders has further delayed the movement of cargo within the country.

It will be a long haul before these supply chain issues can be resolved. China Merchants Ports warned this week that the weakening economic outlook would take its toll on operations this year.

Nevertheless, it still completed its deal with CMA CGM to take over the first eight of 10 terminals that are being transferred to the two companies’ joint venture, Terminal Link, providing CMA CGM with a much-needed $815m cash injection to help manage its large debt commitments.

Oil companies and traders are turning to storing crude on tankers at sea as oil prices hit 20-year lows.

That has returned spot rates and tanker freight futures to the stratospheric levels of mid-March. Second-quarter forward freight agreements for VLCCs on the Saudi Arabia-China route rose 54% in value in 10 days and gained 260% over March. 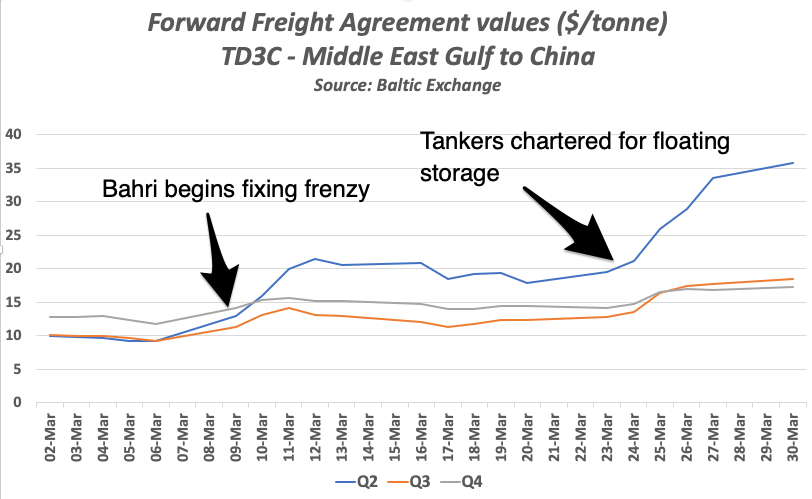 The FFAs spike gives valuable insight into market sentiment as the scope of the oil demand collapse and the scale of a looming crude and products surplus emerges.

This suggests traders and oil companies expect floating storage to surge in coming weeks, pushing up rates for larger tankers even as global demand for crude falls.

Market conditions represent a “once in a generation” opportunity for tankers, said Robert MacLeod, chief executive of Frontline, talking up the company at an institutional investors seminar this week.

“The storage is really kicking off, and this is about to change this market and change 2020 completely,” Mr MacLeod said.

Tanker companies are buoyant as a result: Cosco Shipping Energy Transportation — a division of China’s Cosco — forecast a positive second quarter despite uncertainty for the remainder of 2020.

The dry bulk market was seen softening towards the end of last week in response to various announcements from mining companies that were shuttering operations in parts of the world, affecting iron ore and coal output, and to some extent minor bulk.

While all dry bulk terminals in South Africa were said to have closed as part of the nationwide measures, Anglo said its Saldanha iron ore terminal was exempt and still operating despite the lower volumes.

ArcelorMittal also said it is temporarily idling steel-making plants given the coronavirus situation, which was negatively impacting economic activity and its business.

The lockdown and force majeure at Indian ports is also causing concern among participants as the country is a major exporter and importer of dry bulk commodities.

And with scrapping temporarily halted at yards on the Indian subcontinent, fleet growth was likely to increase, not welcome news for a sector struggling to get back on its feet.

As covered in yesterday’s From the News Desk article, bans on crew changes and difficulties with repatriation may soon have a detrimental impact on ongoing trade of essential items amid the pandemic.

The International Maritime Organization has taken on board concern from industry associations and urged governments to enable crew changes and allow seafarers to travel in their countries for repatriation or for crew changes.

The regulator has issued a circular to governments, organisations and other UN bodies with a set of recommendations — suggested by 16 bodies representing seafarers, shipowners, ports and others — calling for seafarers, port personnel and others to be considered key workers that provide essential services.

Seafarers and maritime professionals should be able to disembark ships in port and transit through a country for the purposes of crew changes and repatriation, according to the IMO.

It also suggested that crew of ships docked at a port could be temporarily restricted on board the vessel unless they are disembarking as part of a crew change or to receive emergency medical attention that is not available on board the ship.

Meanwhile, Singapore has unveiled special circumstances that will allow the rotation of crews, including if the crew has served their maximum time on board and no further extension of the employment contract is granted by the flag state.

Exemptions will also cover compassionate grounds such as the death of a family member or a scenario in which the crew member is no longer medically fit to work on board the vessel.

From the home front: How one shipping leader is adapting to the new normal