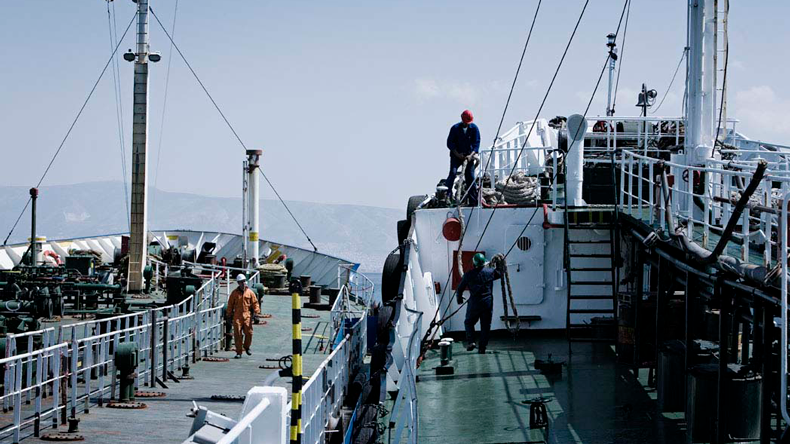 Global shipping has slowed, with consumer demand dropping due to the coronavirus pandemic.

VLSFO’s availability for bunkering and delivery schedules in the US Gulf was unpredictable in January, with suppliers still getting their footing after the January 1 start of IMO 2020, the International Maritime Organization’s  regulation requiring vessels to either install scrubbers or cap the sulphur content of the fuel they burn to 0.5%.

However, from February, VLSFO availabilities and barge delivery schedules stabilised. Supplier competition for VLSFO bunkers in the US Gulf picked up and the VLSFO premium to HSFO began to narrow.

Looking forward, prices of both VLSFO and HSFO could fall further in the wake of the Saudi Arabia-Russia price war and coronavirus counter-measures.

Demand for HSFO could drop as a result of cruise line operations suspensions. Three of the biggest publicly traded cruise ship companies — Norwegian Cruise Line, Carnival Cruise Line and Royal Caribbean — suspended international operations for some 60 days through May 10-12 as a result of coronavirus.

The three cruise lines’ combined monthly marine fuel consumption is about 477,400 tonnes. About 40%-65% of their vessels are outfitted with IMO 2020-compliant marine exhaust scrubbers. Of the 477,400 tonnes burned monthly by the three lines, about 278,500 tonnes is HSFO. Other cruise lines, such as MSC Cruises, Disney Cruise Line and Viking Line, which also installed scrubbers, have partially or fully suspended operations, but their marine fuel consumption is not disclosed.

In addition to coronavirus, the Opec-plus price war has created a crude oil glut that could put downward pressure on demand for HSFO as coker feed, freeing up more HSFO for the bunker market.

VLSFO losses are also expected to deepen. The international vessel fleet burns mainly VLSFO rather than HSFO or marine gasoil (MGO), as evidenced by statistics from Singapore, the biggest bunkering port in the world. In the January-February period, VLSFO sales in Singapore accounted for 71% of total local marine fuel demand, with HSFO accounting for 19% and MGO — with a 0.1% sulphur content — accounting for 10% of sales. 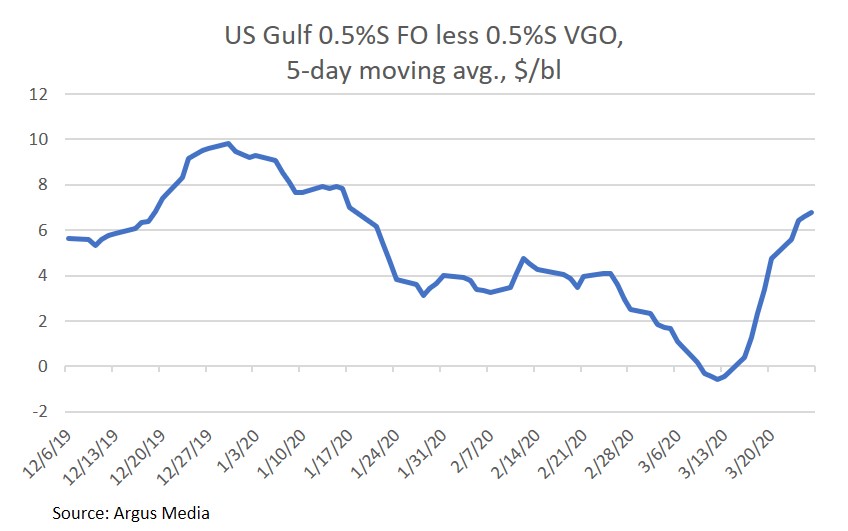 However, global shipping has slowed, with consumer demand dropping due to the coronavirus pandemic. The Opec-plus price war caused spot physical oil prices to drop and created a futures contango, which in turn increased appetite for oil tanker floating storage. Even though dirty oil tankers are currently enjoying high utilisation rates, their marine fuel consumption has dropped.

With Chinese domestic gasoline demand down, China is exporting more gasoline, creating an international glut. This could free up LS VGO, redirecting it from use in FCCs into the international bunker pool, to be used outright as low sulphur bunker fuel or in VLSFO bunker blends. Argus assessments showed the 0.5% sulphur FO-VGO premium in the US Gulf widening to $6-$7 per barrel in the second half of March.

Learn more about Argus’ coverage of the global bunker markets by selecting the link in the banner below.