Ships pushed to cut carbon emissions by at least 80%

The progression of climate change and new relevant information that becomes available mean responses can change significantly down the years. With a target of decarbonsing vessels by 2034, the Clean Shipping Coalition and the Pacific Environment, two organisations that are members of the IMO, want ships to reduce carbon intensity much more sharply than others are suggesting.

A new proposal wants ships to begin meeting annual carbon intensity cuts in 2023, totalling at least 80% by 2030 compared with 2008 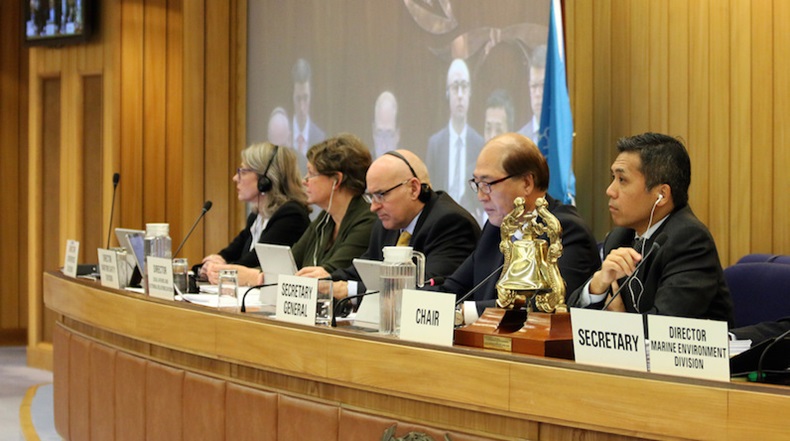 A new date for the delayed ISWG-GHG and MEPC 75 has not been set.

SHIPS should improve their carbon intensity by at least 80% by 2030, according to a new regulatory proposal seen by Lloyd’s List.

The proposal tabled to the International Maritime Organization by the Clean Shipping Coalition and Pacific Environment marks the most aggressive plan yet for a short-term emissions measure for the shipping industry.

It demands that vessels attain this target to achieve shipping’s full decarbonisation by 2034, in what would be a significant escalation from other measures proposed to the IMO and from the targets envisaged in its greenhouse gas strategy, reflecting new information and geopolitical shifts that have emerged since.

This proposed minimum 80% reduction would be based on 2008 baselines and would apply for vessels per type and size starting in 2023.

The Clean Shipping Coalition and Pacific Environment suggest that because the 2008 emissions data is not granular enough, the IMO could use 2015 emissions data based on the Automatic Identification System and even potentially 2019 data from its Data Collection System to calibrate the 2008 baselines.

To meet the targets, ships could reduce speed, use energy-saving methods such as wind-assist, or switch to zero-carbon fuels, they say.

Enforcement would require deployment of several existing tools and new ones, including use of certificates to curb permitted sailing times if non-compliance is detected. For that to happen the IMO would need to determine average annual ship service hours.

The potential negative impact of decarbonisation measures on small island developing states and least-developed countries is a major obstacle for the IMO in its efforts to agree new regulations. The IMO has highlighted their unique needs in its initial GHG strategy.

The non-governmental organisations suggest that ships voyaging in and out of remote SIDs and LDCs are given some leniency to prevent harm to these countries from the measure and be given and opt-out clause from the rules.

While the proposal is based on annual targets, the NGOs suggest ships would have to comply with three-year cycles to provide shipowners with a degree of flexibility; a ship could exceed its annual target as long as its three-year cumulative performance meets the cycle’s target.

The submission includes a detailed list of annual targets for each vessel type and size.

The proposal was made to the intersessional working group on GHG emissions, a preparatory body that was set to meet next week in London and where other technical and operational short-term measures would be discussed. The Marine Environment Protection Committee, which is the ultimate authority on environmental regulation, was scheduled to meet the following week, from March 30 until April 4.

However, the IMO has postponed both these meetings, along with others before them, due to the coronavirus outbreak. It is unclear at the moment when they will be rescheduled.

Postponement has thrown into question the potential for new decarbonisation measures to be finalised this year; IMO process requires one MEPC to approve a measure and the next one to officially adopt it. The next MEPC is scheduled for late October, but delegates require sufficient time between two meetings to assess the policies on the table and make their own proposals.

It is also unclear whether IMO members will be able to submit new documents or amend their existing ones for the delayed meetings once they are rescheduled.

The co-sponsors push for an 80% carbon intensity cut lies in the desire to keep global warming to below 1.5°C, as data published since April 2018 has highlighted the significance of this. The Paris Agreement, on which the IMO strategy is based, seeks to keep temperature increases “well below” 2°C and pursue efforts to limit it to 1.5°C.

But the proposal also partly reflects developments in the shipping industry. The International Council on Clean Transportation, an environmental research organisation that advises the CSC, has estimated that by 2015 ships had already reduced carbon intensity by 30% compared to 2008.

Meanwhile, a reshuffled European Commission wants the European Union to regulate shipping emissions, empowering NGOs that want to see more rapid decisions from regulators and stricter measures for the sector.

Regardless of the levels of ambition, operational measures such as the one proposed by the NGOs run into hurdles when the question of who has to foot the bill is asked.

A crucial concern for many with interests in tramp shipping is that shipowners will have to adhere to rules that have annual targets and over whose operational implementation they have little control.

With charters often agreed for a single journey, shipowners would be dependent on the performance of multiple companies throughout the year to have compliant vessels.

The NGOs acknowledge this potential problem and suggest to the IMO to consider carbon intensity targets for each vessel journey rather than for each year.

“A per journey CI requirement would provide predictability in relation to commercial charter-party contracts, including in relation to setting the operational speed of the vessels and their load factors. This would bring charterers into the regulatory process,” the proposal said.