The week in charts: China’s containership calls back to normal and tanker rates soar

While Europe and the US introduce more restrictive measures to reduce the spread of the coronavirus, new cases in China gradually reduce and container activity increases

Port calls at China’s two main container ports are returning to the same levels seen a year ago, while the oil price war stokes up tanker markets 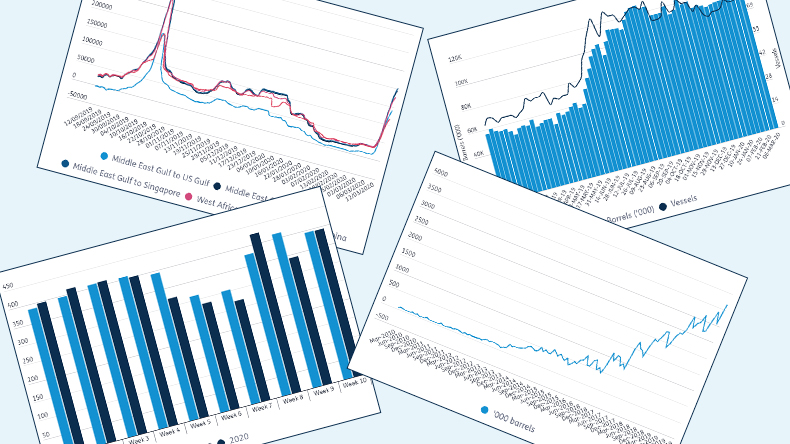 The oil price war is expected to have a detrimental impact on exports from the US.

AMID the continued spread of the coronavirus and new containment measures in Europe, the US and around the world, one of the key indicators of economic activity in the country at the epicentre of the health crisis is returning to usual seasonal levels, according to new figures from Lloyd’s List Intelligence.

The figures, which record port calls by containerships, general cargo vessels with container capacity, con-ro vessels and container barges, saw a deep fall following the outbreak of coronavirus and the extended shutdown of factories following the Chinese New Year celebrations.

Those figures have since recovered and, despite a downturn in week nine, now stand at an almost identical level to where they were in week 10 of 2019. There were 394 calls in week 10 last year and 393 this year.

As Lloyd’s List reported earlier in the week, CMA CMG chief executive Rodolphe Saadé believes the situation in China is already beginning to recover and exports are rapidly returning to normal as Chinese factory production ramps up again.

If the coronavirus outbreak was not enough for the global economy to contend with, an oil price war has broken out in the past week with Russia and Saudi Arabia — the two largest exporters — at loggerheads and seemingly intent on a race to the bottom for market share.

Moves by Saudi Arabia to flood the market with its crude started on Monday with the kingdom’s national shipping arm Bahri provisionally booking at least ten VLCCs, paying freight costs that were as much as 10 times more than average earnings.

This in turn sparked a tanker chartering frenzy with oil traders and Asian refiners chartering a further 25 very large crude carriers by Wednesday with a ten-fold increase in rates over a 72-hour period and a record volume of freight futures traded in London.

By Thursday, VLCC daily rates on main tanker routes had grown by almost 25% in certain cases and several Greek shipowners were the biggest winners. Currently, however, all these major deals are “on subjects” and the market is waiting to see which are finalised to establish the ceiling for rates.

But while there are short-term positive signs for freight rates, brokers argue that a low oil price for an extended period will take a toll on US oil exports. In turn, this will reduce tonne-mile demand for tanker shipping in the longer run as trade flows for the commodity switch to lower priced producers.

Moves by Saudi Arabia to flood the market with cheap crude oil are primarily designed to hurt the debt-fuelled US shale oil industry, which has filled the gap left by Opec-plus production cuts over the past three years, eroding the cartel’s market share even as oil prices stabilised.

The timing of the price war comes as the US Energy Information Administration revealed that exports of crude oil averaged a record 2.9m barrels per day in 2019, an increase of around 45% from the previous year.

Prior to the tanker rates frenzy, the oil price slump was expected to drive up demand for floating storage. The contango structure of the market currently, where the front-month price is lower than future prices, can lead to traders buying and storing oil on tankers for later sale at a profit.

However, with rates the way they are now it is unlikely that tanker operators will be leasing out vessels for such activity in the short term at least.

Some 47 VLCCs were deployed for temporary floating storage, which totalled 120m barrels for the week ending March 6, according to Lloyd’s List Intelligence. However, 35 of these were VLCCs owned by the National Iranian Tanker Co, storing sanctioned crude and condensate off Iran or Malaysia, that is unable to easily trade.

Momentum for floating storage has been building after a second newbuilding very large crude carrier owned by oil trader Vitol was chartered last week for a short-term period of six months. This suggests it will also be used for floating storage off Singapore, adding to a slowly rising armada of tankers there.