Oil prices plunged overnight after Russia and Saudi Arabia failed to agree on new production output. Meanwhile, the coronavirus will likely cause the first drop in global oil demand since the global financial crisis 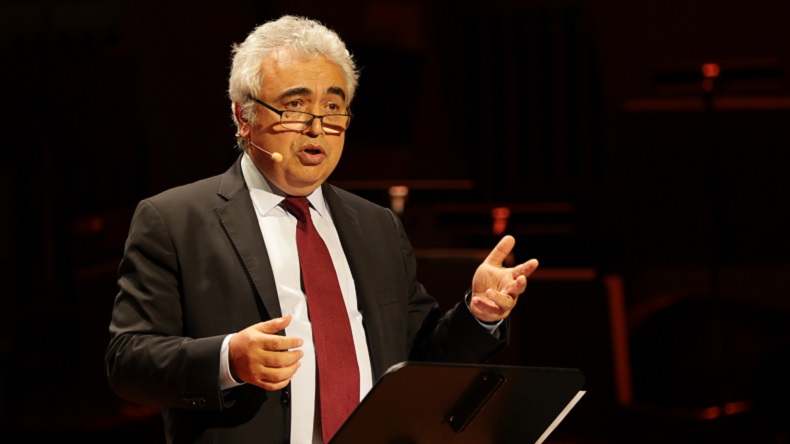 Birol: Refused to name the country accused of sabotaging the oil price downwards to destroy the debt-fuelled shale industry in the US.

GLOBAL oil demand is set to drop in 2020 for the first time since 2009 due to the coronavirus, the International Energy Agency has forecast, as its chief accused certain quarters of playing “Russian roulette” to try to drive down oil prices against the backdrop of a global health crisis.

The IEA announced on Monday that it expects a 90,000 barrels per day drop in global oil demand year on year for 2020, a downward revision of about 1m barrels per day from its previous forecast.

IEA executive director Fatih Birol said during a webinar that the organisation expected an overhang of 3.5m barrels per day across different countries.

The IEA published its projections as oil prices fell as much as 30% on Monday, following Saudi Arabia’s decision to increase its production in the aftermath of Russia’s refusal to cut its own supply. Although oil prices recovered slightly during the day, the fall upon opening was the biggest since 1991.

A 90,000 bpd drop is the IEA’s base case projection. But in a situation in which the global economy is slower to recover from the coronavirus outbreak, global oil demand could fall by 730,000 barrels per day in 2020. In an optimistic scenario, in which the situation comes under control quickly, demand could increase by 480,000 barrels per day in 2020.

Mr Birol said the severity of the situation came down to two main factors; China’s significance in the global trade and the energy demand and the disproportionate impact of the virus on mobility, exemplified through aviation, which although it generates 1% of global gross domestic product accounts for 8% of global oil consumption.

“Putting the demand and the supply picture together, I think this situation seems to have no equal in the oil market history, with such a shock combination of massive supply overhang and significant demand shock at the same time. So we think this is an unprecedented situation,” he said.

Mr Birol said he was worried for oil producing countries as a collapse in oil prices would deplete their revenues. For some countries, it would be almost impossible to finance areas such as healthcare and education, leading to potential destabilisation in countries such as Iraq, Angola and Nigeria.

“The IEA has repeatedly talked about the importance of diversification of these oil producing economies. And now diversification becomes simultaneously more important but at the same time more because of lack of funds to diversify,” he said.

The dire situation caused by the outbreak of coronavirus has been followed by the inability of Opec and non-Opec countries to agree new production cuts, leading to Monday’s price rout.

Without directly naming countries, Mr Birol slammed actors whose motivation is to kill shale — an apparent reference to Opec’s efforts to curb the market share of the North American product by slashing the oil price — warning that the commodity has proven its resilience before.

“Looking at motivation of some of the actors to kill shale, I would say that at a time of such uncertainty and potential vulnerability for the world economy, playing Russian roulette in oil markets may well have grave consequences,” he said.

The current crisis is halting the growth of shale, as independent producers are already heavily indebted, he said. Ultimately this could lead consolidation and bring further efficiency gains. Some oil market commentators believe Saudi Arabia wants to destroy the debt-fuelled shale industry in the US.

Looking beyond the disruption from the coronavirus, the IEA said it expected global oil demand growth between 2019 and 2025 to average annually at 950,000 barrels per day, an evident drop from the 1.5m barrel per day growth seen over the past decade.

“Oil demand growth slows because demand for diesel and gasoline nears a plateau as new efficiency standards are applied to internal combustion engine vehicles and electric vehicles hit the market,” the IEA said.

Meanwhile, petrochemical feedstocks, liquid petroleum gas/ethane and naphtha would account for around half of all oil product demand growth. Continued rising demand for plastics and demand for cheap natural gas liquids in North America would also contribute.

Supply would be more than sufficient to meet the anticipated demand, with global production capacity expected to increase by 5.9m barrels per day by 2025.

“The US leads the way as the largest source of new supply. Brazil, Guyana, Iraq and the [Unired Arab Emirates] also deliver impressive gains. Colombia, the UK, Russia, Egypt, Nigeria and Angola post the biggest declines,” the IEA said.

But it warned the supply growth is “heavily front-loaded” and US production is slowing down, dropping from 2.2m barrels per day in 2018 to 1.6m in 2019 due to spending cuts from independent producers and scaled-back drilling activity.

“In our base case, which assumes $60 per barrel for Brent crude, growth is expected to grind to a halt in the early 2020s and production will plateau around 20m bpd – 2.5m bpd higher than in 2019,” the IEA said.

The agency expects that beginning in 2022, the US slowdown will allow Opec countries in the Middle East to step in and add to the supply.

Maritime fingers on the economic pulse