Backhaul shippers expected to feel knock-on impacts of blanked sailings, but port calls in China have bounced back

Cargo owners are facing up to a series of challenges brought about by the raft of blanked sailings attributed to the coronavirus outbreak, while Lloyd’s List Intelligence data showed sanctioned Iranian oil cargoes are being shipped from Iraq 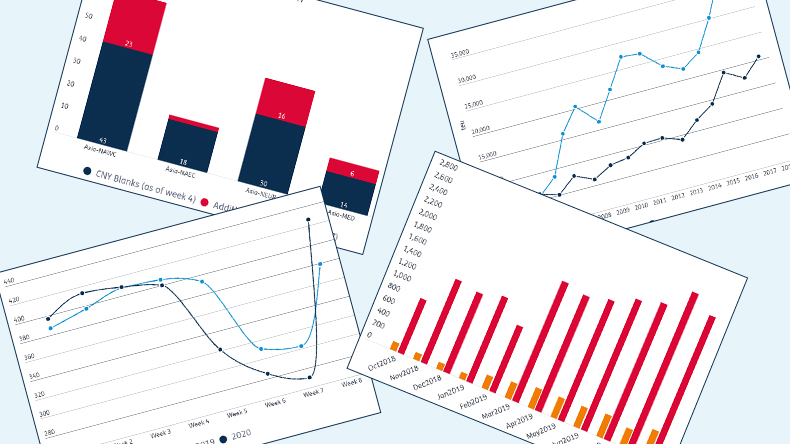 THE CONSEQUENCES of coronavirus-related blank sailings are likely to be experienced in the coming weeks and months with port omissions, vessel delays and other network disruptions.

Even with more offices and factories reopening in the past week, backhaul shippers, in particular, are likely to experience issues as container carriers are expected to prioritise empty container repatriation over low-freight backhaul cargo, according to Sea-Intelligence.

The consultancy tracked the number of blank sailings attributed to the coronavirus, taking the eight-week period from week 5 to week 12, with data calculated in week 4, immediately before the Chinese new year holiday, taken as the baseline.

For more on the coronavirus impact on container shipping market, read Sea-Intelligence chief executive Alan Murphy’s full analysis in the next issue of The Lloyd’s List Magazine due out next week.

On a more positive note, the signs are that the flow of goods into China’s leading container hubs is picking up again.

The number of vessels calling at Shanghai and Yangshan indicates the trajectory of the coronavirus impact may be beginning to turn.

Figures from Lloyd’s List Intelligence show a sharp increase in container-related vessels from 270 in week seven to 426 in week eight.

At the same time, however, Lloyd’s List Intelligence fleet data shows that the number of idle containerships has soared to new highs since last week, with more than 1m teu, representing 4.6% of the global fleet capacity, unemployed.

This is up 4.3% from the same time last week, and indicates carriers have taken yet more tonnage out of service to meet reduced demand for transport.

Away from the coronavirus outbreak, a spike in fuel oil exports from Iraq’s Khor al-Zubair export terminals, accompanied by subterfuge shipping practices used by tankers which load there, reveals hidden flows of Iranian oil cargoes being shipped to the bunkering centre off Fujairah and to floating storage off Malaysia.

A Lloyd’s List Intelligence and Lloyd’s List report shows that 2.1m tonnes of dirty cargoes were loaded from the offshore port limit of the Iraqi port in January, compared with 1.3m tonnes in the same period the previous year.

Overall loadings tracked at the OPL region in 2019 totalled 23.8m tonnes, more than double the 11.4m tonnes tracked in 2018, before the US imposed sanctions on Iran’s oil and shipping industries.

The OPL volumes tracked by Lloyd’s List Intelligence do not separate between crude and fuel oil loadings. But the port is from where most of Iraq’s fuel oil is shipped, with volumes much greater than official data reported to the Joint Organisations Data Initiative.

Finally, the US recently announced it has opened trade talks with Kenya in what could be the start of a new relationship with sub-Saharan Africa.

Kenya’s President Uhuru Kenyatta met US President Donald Trump earlier this month at the White House with the aim of initiating a free trade agreement between the two countries.

If successful, this FTA would be the first between the US and a sub-Saharan African country and it would potentially be considered a template that the US could use to boost its trade and investment relationship with the rest of the African continent.

In an analysis of the potential impact on shipping of an agreement, transport specialist Antonella Teodoro examines how maritime trade between the US and the only other country the US has a trade deal with on the entire African continent, Morocco, has fared since the agreement was signed in 2004.

As the graph below shows, maritime loaded teu has grown at almost a 14% compound annual growth rate since the deal came into effect in 2006, in what could be an encouraging sign for the development of the region.

The Lloyd’s List Podcast: Qatar brings a fresh perspective for the Gulf

From the News Desk: Has the shipping sector accepted new EU emissions rules are inevitable?