Vanuatu objects to the proposed way in which fees would be collected, saying there is already a practical blueprint in use that could be adopted for this new R&D levy. The Solomon Islands and Tonga want governments to have greater control of funding and consider the needs of less-developed countries and small island developing states. Elsewhere, the OECD is raising the alarm that the $5bn R&D fund resembles government subsidy schemes for shipping

It is being argued that if the IMO is the body approving the R&D fund, it should also be the body to decide where the money goes. Another major objection to the current plan is that rather than charging $2 per tonne of fuel oil that each ship consumes, flag states should collect $0.5 from shipping companies for each gross tonne in their fleet as they already do with multiple yearly fees 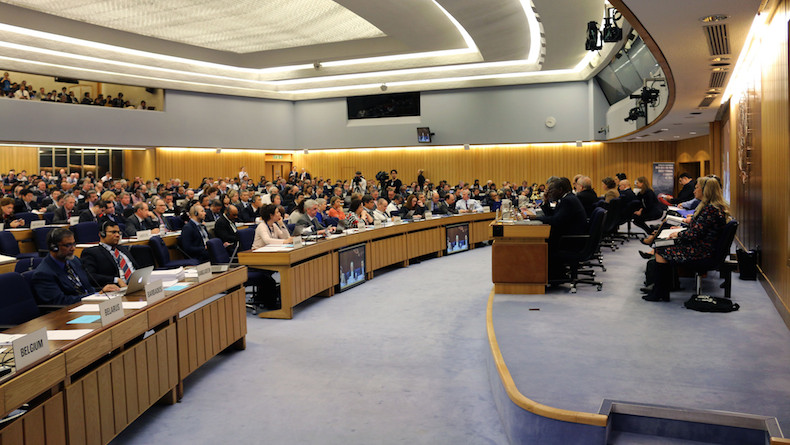 SMALL islands states have raised concerns about a proposed $5bn research and development fund, demanding financing and governance changes that could fundamentally alter its nature.

Late in 2019, the industry's biggest lobbies proposed the creation of a 10-15 year R&D fund relating to the decarbonisation of shipping. Central to their idea is that the fund would not be under the control of the International Maritime Organization.

Shipping companies would have to pay $2 for each tonne of fuel oil their ships consume, generating approximately $500m in revenues annually. The International Maritime Research and Development Board would administer the funds and allocate them to shipping decarbonisation R&D projects.

The proposal had been in the works for about three years and its official tabling to the next IMO environmental meeting in April was meant to be the industry’s landmark response to the global calls for the decarbonisation of shipping.

But documents submitted to the Marine Environment Protection Committee by Vanuatu, the Solomon Islands and Tonga demonstrate why this will likely not be a straightforward decision by the IMO.

The shipping groups lobbying for the creation of the fund claim that they want to avoid its politicisation. In their vision, the IMO would ensure that the payments are mandatory, but the fund would be run by an independent board and secretariat.

Supporters of this set-up argue that the money would go to projects based on merit and not on political considerations, such as assistance to least developed countries and small island developing states.

While the IMO initial greenhouse gas strategy lists the creation of an International Maritime Research and Development Board to co-ordinate and run R&D efforts as one of many potential measures, it also separately highlights that small island developing states and less developed countries have particular needs that require special attention.

In its submission to the committee, Vanuatu claims that it supports the idea of the industry's R&D fund but argues against two of its fundamental pillars.

Either of the two options would bring the generated revenues and their administration firmly in control of the IMO and its flag states.

The second radical change Vanuatu wants to make is in the actual source of the funds.

At present, the suggestion is that this new R&D levy would be in the form of a fee based on fuel oil consumption. However, Vanuatu explains that such a task would represent a major administrative burden and would also be difficult to implement.

Rather than charging $2 per tonne of fuel oil each ship consumes, Vanuatu argues that flag states should instead collect an “estimated” $0.5 from shipping companies for each gross tonne in their fleet. It backs this argument up by pointing out that it would run in parallel with a system that already exists, making it extremely easy to implement.

Vanuatu explained: “[The R&D fee] collection would be greatly facilitated, since it would be based on an existing modus operandi already used by all administrations with the current collection of multiple yearly fees from shipowners.”

It also suggests 10% of the money collected would go to a trust fund to assist developing countries, especially small island developing states and less developed countries “for building the necessary capacity to transfer and finally adopt these technologies”.

Elsewhere, the Solomon Islands and Tonga said in their proposals that they recognise the need for investment into R&D and that the industry proposal is in line with points of the IMO’s strategy.

They also argue that if the IMO is the body approving the fund, it should also be the body to decide where the money goes.

But Solomon Islands and Tonga argue that the fund’s structure is similar to a fuel levy as an MBM, and that it ultimately sets a precedent for a market based measure. So the countries want the IMO to agree the structure of the levy before adopting any proposal.

While these countries are envisaging a different kind of fund, the Organisation for Economic Co-operation and Development wants greater clarity on the aims of the industry proposal.

“The proposed programme is characterised by its collective nature, the mandatory nature of the R&D contribution and dependence on implementation by flag states. As such, the programme resembles government subsidy schemes for the shipping sector,” the OECD said in its submission.

The OECD produced a report last year criticising the effectiveness of maritime subsidies. It wants this R&D fund to avoid the same shortcomings.

It argued that the R&D fund should have clear goals that can be evaluated. Having goals would shed light on “why can the R&D not be carried out in market conditions by private players”, something that the OECD describes as a market failure.

Objectives could also offer clarity “by association with the identified market failure, a clear and quantifiable objective function, intended outcomes and outcome metrics, as well as the extent to which outcomes depend on complementary policies, such as robust carbon pricing”.

Other issues that need clarifying, according to the OECD, are exactly what phases of R&D will be eligible for funding, what constitutes low-carbon and zero-carbon technologies or fuels and whether the money is intended for just shipowners, operators and projects that are ship-related or could go to shore-based applications and other stakeholders.