Disagreements over approach to decarbonisation persist

Should fossil fuel vessels be banned in 2050? Should they be banned earlier or not banned at all? Will customers really drive decarbonisation or is regulation the biggest push factor? Shipowners, operators, politicians and NGOs can't quite agree on the answers

A high-profile panel discussion in Brussels highlighted how despite agreement on the overall goal, decision makers and stakeholders have different visions of the future 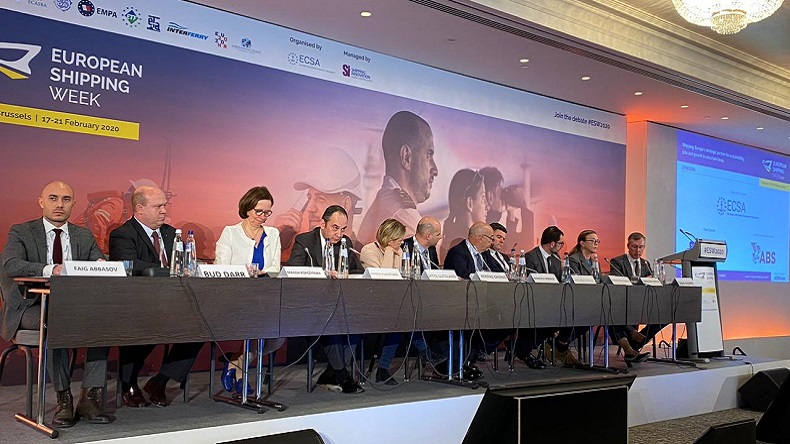 Representatives from multi-nationals mixed with Brussels bureaucrats during the panel discussion at ESW 2020.

SHIPPING’s long-term shift away from fossil bunker fuels may be a foregone conclusion, but within the industry there remain different visions of how easy that will be and who will be the driving forces behind it.

During a panel discussion at European Shipping Week in Brussels, Torvald Klaveness chief executive Lasse Kristoffersen said claims that the shipping industry could not afford the decarbonisation transition were inaccurate, because shipowners would end up adding the additional cost of the alternative fuels to the price of the freight.

“We all know that what will happen is that we will change the fuel and it will be more expensive... We will pass back that on to the consumer anyway. We did it already,” he said.

Mr Kristoffersen, who is also the chairman of the Norwegian Shipowners Association and is one of the most outspoken executives on emissions, said shipping needed energy efficiency measures in the short term, as those would facilitate energy transition.

The International Maritime Organization is widely expected to agree to a short-term measure this year, with technical and operational measures on the table.

“If there's one thing this industry can [do], is to move towards profit. So if this becomes more profitable… it will happen,” he said.

Mr Kristoffersen also called for a complete ban on vessels using fossil fuels in 2050, suggesting the 30 years until then offered the sector an opportunity for a complete renewal of the global fleet.

Not all shipowners feel the same way, however.

His argument was that prohibiting ships on a specific date would prevent owners from making improvements on their current fleet, as they would know that those ships would not be used in some years’ time.

For others, however, Mr Kristoffersen’s vision is not sufficient.

Faig Abbasov, shipping director at Brussels-based non-governmental organisation Transport and Environment, argued that banning fossil fuel vessels in 2050 was too late and that decisions needed to be taken much sooner.

“The problem is now, it is here, so the action needs to be here and now as well,” he said.

Others want a greater consideration of what asking for more would really mean.

Intercargo secretary-general Kostas Gonis said that the sector was already being asked to make a massive improvement in its energy efficiency performance.

If it wanted to raise its environmental ambitions, it needed to assume the responsibilities of the cost implications.

“As far as our sector is concerned, if we disrupt our business model, you will see an inflated bill in electricity, heating, food, the basic needs that we serve,” he said.

The role of the customer

While Mr Kristoffersen was confident shipowners would pass on the cost of zero-emissions fuels, it is unclear whether customers and consumers are as of right now willing to dig deeper into their pockets.

MSC executive vice-president for maritime policy and government affairs Bud Darr said the company’s larger customers on the container side of the business often had their own policies and pressures to be more sustainable.

That put pressure on MSC to deliver, and in certain cases customers even requested auditing rights that the company might or might not grant.

“But have we seen indications they are willing to pay for that? To this point, I have to say I have not really seen that,” he said.

Like Mr Barr, CMA CGM sustainability director Guilhem Isaac Georges said the reluctance of shippers to pay for the 2020 sulphur cap surcharges on fuel indicated some unwillingness from customers to finance sustainability efforts in shipping.

However, Mr Isaac Georges pointed out that larger customers had been more willing and even proactive in sustainability efforts, with IKEA approaching the company to participate in biofuels trials that CMA CGM then conducted.

Customers were also taking an interest in the company’s plan to run more vessels on biofuels this year as well as in the carbon reports that CMA CGM produces for certain of its vessels, he added.

The Swedish MEP Jytte Guteland said she did not believe the general public had changed their consumer behaviour based on wider environmental considerations thus far.

Instead, they continued to focus on the direct emissions of products they use, such as cars. But that will change, Ms Guteland believes, with attention broadening to emissions of the wider supply chain, including shipping. “Then customers will either want to pay more or not pay at all,” she said.

However, was not clear that customer demand would actually be enough to drive the sector to decarbonise on an industry-wide scale.

Mr Abbasov said that the most important factor in decarbonisation was the reduction in the cost gap between alternative and fossil fuels.

Experience in other transport sectors indicated that voluntary action did not close that gap and it was regulation that did the job, he said.

“Consumers want clean ships, but are not willing to pay,” Mr Abbasov said.

Additionally, early adopters of alternative fuels or technologies would be taking on huge financial and technical risks, creating a collective action problem for the industry whereby no ones wants to take the first jump.