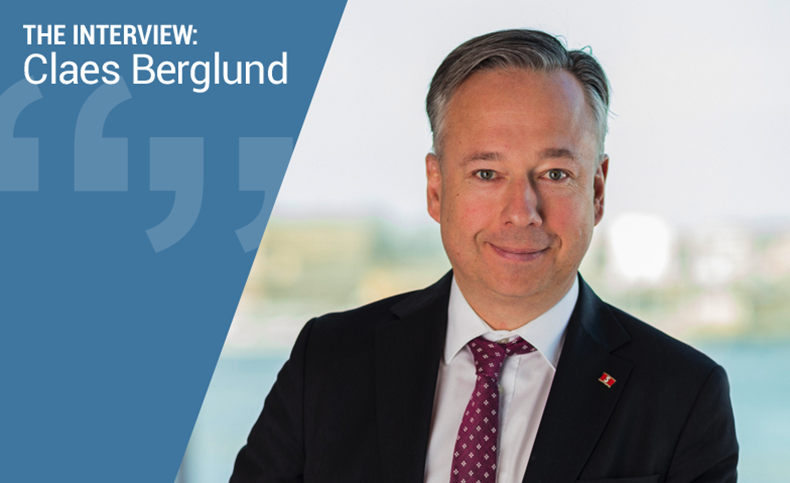 WHILE the centre of gravity in the shipping world is now very firmly in the Eastern Hemisphere, European shipping remains competitive and is at the forefront of technological innovations and solutions.

But one of the major challenges facing the industry across the continent is the aim of the new European Commission, led by president Ursula von der Leyen, to make the bloc carbon-neutral by 2050.

A recent European Parliament report urged the commission and EU Council to consider including shipping in the EU’s Emissions Trading Scheme, much to the alarm of shipowners and others in the sector who have warned that such a move would threaten progress at the International Maritime Oraganization towards the longer-term goal of an international agreement on decarbonisation.

One of the key figures arguing the case for European shipping in Brussels is Claes Berglund, director of public affairs and sustainability at Stena AB and president of the European Community Shipowners’ Associations, which represents all EU shipowners’ associations plus Norway.

Speaking to Lloyd’s List in Athens prior to setting out the Ecsa position on the European Commission’s flagship Green Deal at this week’s European Shipping Week event in the Belgian capital, Mr Berglund said his aim is to engage with EU policy makers to ensure Europe’s shipping sector is “sustainable, competitive, innovative and agile enough to adapt to the rapidly-changing global environment.”

The Ecsa ambition is to not only keep European shipping profitable but also to make sure they have the tools to remain innovative. “Europe’s owners have come up with many new ideas,” Mr Berglund said. “If they hadn’t, no doubt the main players would leave Europe.”

He is well aware that competition from Asia is very strong, which is why Ecsa is so focused on the application of state aid guidelines.

“It’s important that we have partners such as Kongsberg and Wärtsilä, and that research and development is well funded and supported. They bring the innovative solutions to the industry,” he emphasised.

Mr Berglund took over his Ecsa role prior to the UK’s withdrawal from the EU at the end of January and an Ecsa statement at the time observed: “Brexit discussions have brought to the forefront how interrelated EU-UK supply and logistics chains are. Maintaining the fluidity of EU-UK trade must therefore be a priority.”

The association called for both EU and UK regulators “to continue the current close alignment on shipping issues and emphasises the importance of including maritime transport in the upcoming trade negotiations.”

Mr Berglund said it is too early to say what the full implications of Brexit will be but hopes the British remain within Ecsa.

“I hope the UK Chamber of Shipping will stay a member — Norway is a member [but is not in the European Union]. It all depends on the agreement reached between London and Brussels. I hope they will stay as we are extremely inter-dependent and will continue working with the British on practical issues.”

Ecsa associations value their membership, even though the ship types differ. Some owners focus on deepsea shipping, others on short-sea, while some members argue that the environmental requirements are too onerous.

“Members do not always agree on every issue,” he conceded. “Sometimes there are challenges: we are an association of members. But mostly it’s no problem — they almost always agree.

“The overriding concern is to make our shipping successful, and there are policies in place to make that happen. At the end of the day, we must keep the dialogue going.”

There are clearly national divides on issues such as gender equality. The president describes this as “a big problem”. There has been a lot of action within Stena to change the balance though.

“We believe our company would be better off if there were more women at sea and in our offices. Interest is increasing. I think the gender equality discussion will grow stronger,” he observed. He added: “Diversity has to be embraced by our industry.”

Addressing concerns that not all member associations can meet the pace of innovation set by Scandinavian businesses, Mr Berglund admits it won’t be easy. “I have a big concern that we are trying to do something very quickly. We must be careful not to bring in new policies that will penalise certain owners. We have to explain to everyone what’s required.

At a press event in Brussels on Wednesday, Ecsa argued in a paper that a main priority for the EU should be to lead in the international regulatory process, helping ensure the IMO targets are met without distorting international competition.

Beyond supporting global policy, Ecsa wants the EU to lead the race in research and development on alternative fuels and technologies, and offer supportive measures for their uptake, while facilitating first movers.