Europe's big four carriers are lobbying regulators to support a controversial $5bn R&D fund. The multi-nationals argue that collective action is necessary and plan to join forces to create a new industry landscape

Maersk, CMA CGM, MSC and Hapag-Lloyd say they cannot go at it alone. They plan to collaborate with each other to push the climate agenda 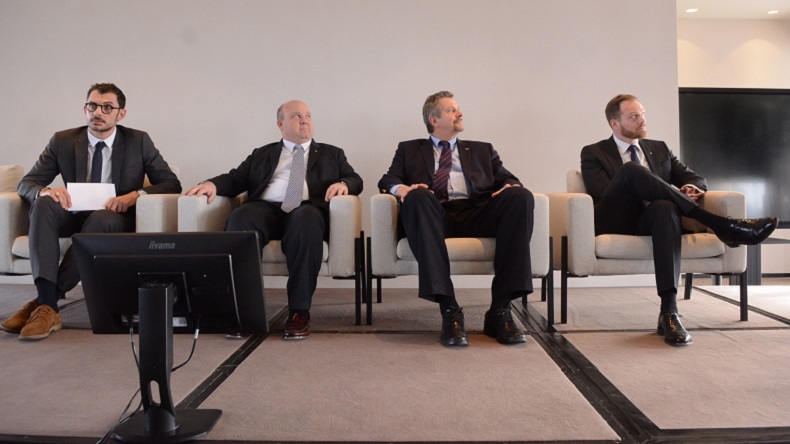 COMPETITORS in just about every other aspect, Europe’s biggest carriers are acknowledging they will need each other to help the decarbonisation agenda and are now lobbying regulators to support a global initiative on research and development.

Sustainability and regulatory chiefs from Maersk, MSC, CMA CGM and Hapag-Lloyd, four of the five largest containership operators globally, sat together for a rare common outing during an event at European Shipping Week, during which they pushed for co-ordinated R&D efforts through a new international body.

The panellists strongly supported an industry-wide proposal for an independently-run $5bn global research and development fund, powered by mandatory payments based on fuel consumption.

While the use of clean fuels will ultimately become part of the competition as well, with biofuel trials and individual sustainability and R&D projects already running, the four carriers think they could only do so much behind closed doors.

“We are not very good at collaborating with people, in all honesty,” Maersk director of regulatory affairs Simon Bergulf admitted. “We have not been really good at that.”

The Danish company has been very effective with its own sustainability efforts, though, and has taken on a leadership role in the field, he argued.

Maersk was the first major company to demand carbon-neutral vessels by 2030 and claims to have already spent billions on sustainability R&D over the past few years. It will also focus on alcohol, biomethane and ammonia and wants to further narrow down its choice to a single fuel in 2023.

Hapag-Lloyd environmental management director Wolfgang Guntermann, whose firm has committed to slashing its CO2 emissions per teu-km by 20% by 2020 compared to 2006, said sharing ideas with its rivals would have been inconceivable some decades ago.

“It is not a matter of competition, it is a matter of jointly developing these issues,” he said, admitting this is a whole new ballgame for the rivals.

“Betting today on technology to break through in 2035 to achieve carbon neutrality in 2050 seems to us very risky. That is why I insist that we have to take these decisions today,” he said.

MSC Group executive vice president for maritime policy and government affairs Bud Darr admitted that despite the size of its firm, which also owns cruise ships, it could never produce the necessary R&D breakthroughs on its own, and the company is happy to pay its part in the collective effort.

“But to bring together the whole community really is going to take a collaborative effort and sharing the results of what has developed through this fund,” he said.

Three years in the making, since its public unveiling late last year, the R&D fund proposal has been received a mixed reception.

“We are creating a neutral body looking at possibilities over which we do not have the faintest clue. This will enable a level playing field,” Mr Guntermann said in support of the idea.

But others question whether this would delay the adoption of a market-based measure in the IMO, a point that has caused frustration among the project’s backers who see this as a conflation of R&D funding and MBMs, two distinct issues.

Mr Darr said there has been “perhaps deliberate misinformation” on the proposal and said the inability of governments in the IMO to agree on an MBM in the past is their responsibility.

“But what has not happened is the industry being an impediment to moving forward on a market based measure. That is simply misinformation by those who simply want that result,” he said.

The very real prospect of international shipping in the EU’s emissions trading system, the emissions cap and scheme, is also a daunting prospect for many in the industry who want to avoid a regional measure on global operations.

But for Mr Bergulf, whether a market-based measure comes as a fuel levy, an ETS, a fuel ban or a whole other tool, Maersk “is open to anything”.

The Lloyd’s List Podcast: Why the EU won’t wait for IMO on climate change

We have a climate emergency, we can’t wait for the IMO, claims Jutta Paulus, the European Parliament’s maritime emissions rapporteur. This week’s Podcast catches up with the controversial MEP in Brussels to discuss her sweeping proposal. It would effectively force ships to operate under an emissions cap and trade system, increase their carbon intensity performance and contribute to a European...

He likened it to the 2020 0.5% global sulphur limit; if the demand had not been there, shipping would still be awaiting fuel producers to come through with compliant fuels.

“We can’t expect that someone else is going to solve this for us,” he said, adding that the industry need to be in a position to tell fuel suppliers what they need and how much of it. “Otherwise we are... creating a chicken and egg situation.”

Mr Isaac George said that before CMA CGM’s investment into the LNG-bunkered vessels, fuel suppliers were not willing to invest in LNG services. Total has since become heavily involved in LNG bunkering and recently agreed to supply CMA CGM’s containerships in Marseille.

“I think the same logic must apply for technologies such as hydrogen and ammonia,” he said.

Mr Darr argued that the container lines industry is uniquely positioned to provide more certainty around fuel volumes than other sectors in shipping are.

“They will probably come around and give us what we need if the demand signal is there early on,” he said.