The Ballast Water Management Convention has been in force for over two years, but an exemption on existing vessels only ended as recently as September last year. Most of the global fleet will have to install treatment systems over the next few years 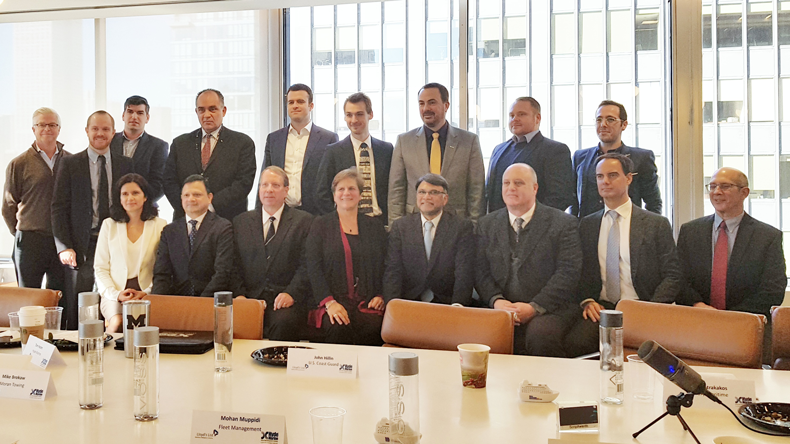 THE GLOBAL shipping fleet faces a crossroads as thousands of ballast water treatment systems are to be installed over the next year while shipowners become more demanding in their choice of systems.

During a Lloyd’s List roundtable in New York on the implementation of the Ballast Water Management Convention, the third such event hosted by BWTS provider Hyde Marine, participants from across the maritime sector shared issues with and observations they have on the regulation and their thoughts and concerns on what the future might hold.

Longstanding problems, such as adequate training of vessel crews, remain but there is perhaps an incoming change in the way of thinking towards the investment that is the ballast water treatment system.

The Ballast Water Management Convention has been in force for over two years now, but with an exemption on existing vessels only over in September 2019, most of the global fleet will have to install ballast water treatment systems over the next few years.

With between 8,000 and 9,000 installations expected this year and over 11,000 anticipated in 2021, retrofitting yards will keep busy, especially considering that scrubbers will also be installed during this time.

This spike in installations, which may last until 2024, will likely cause extended lead times at shipyards, something that shipowners will have to account for and plan accordingly when they prepare for their installations.

The high demand will be a problem for the limited number of filter providers that are necessary to produce the treatment systems.

“So, not only getting the newbuild equipment but servicing now a field population of 20,000 to 30,000 ballast water treatment systems is going to start becoming difficult,” they added.

With a limited portion of the fleet having treatment systems, one participant expressed concerns of what that the bottleneck, especially between 2022 and 2024, will look like. “But we’ve also seen, in some cases, owners that are fitting scrubbers and also taking opportunities since they’re already in the yard to fit their ballast water treatment systems ahead of time actually, since they are in the yard at that time.”

Coinciding with this anticipated boom is owners’ realisation that compliance requires a different approach to system selection.

One participant claimed owners have not been as forward-thinking as they should have been in their selection of systems due to a generally squeezed market that has incentivised focus on spending as little as possible on a vessel. “There’s been too little regard for what’s going to happen down the road.”

But another participant said that owners can no longer afford to invest in cheap systems and ignore potential problems that come up as they have done in the past.

The feasibility of the system’s use for the vessel’s crew will become one of the most important issues in selecting systems, the participant argued, as will a system’s operating expenses, parameters mostly overlooked thus far.

Showing up at a port with a treatment system that does not work is no longer an option, and owners who find themselves in this situation may be reconsidering their choices.

“As those [incidents] continue to happen, I believe you're going to see a little bit of shift in the marketplace away from those inexpensive systems to a system that people like,” the participant said.

Today the price of a system continues to be a crucial factor in system selection. But other factors, such as a quality service network and the credibility of the system vendor, are also important, participants observed.

Owners for years have had to contend with shipyards that push their own preferred manufacturer. Complaints have widely been levelled that the systems were both problematic and lacking an adequate service network or follow-up support by the manufacturer.

Amid a low global order book, that status quo may be changing, according to one participant. The pressure on the shipyards to secure orders means owners have an advantage in demanding the systems they want.

While ballast water treatment may not be going away, the full impact on global shipping remains to be seen.

Viewpoint: Getting what you pay for