Last year’s US-China trade war put the brakes on growth in the box market, while US seaborne crude oil exports hit a record high in December

Global containerised trade in 2019 experienced a significant slowdown in growth, according to full-year figures 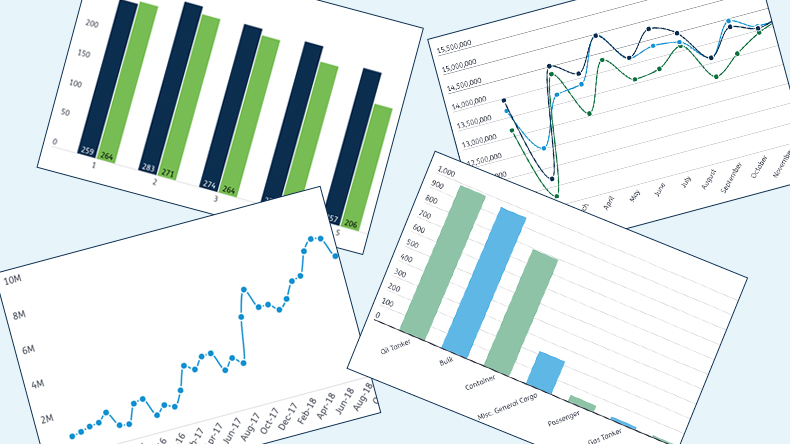 Scrubber-retrofits, US crude oil exports and Chinese port calls all feature this week.

NEW data published by Container Trades Statistics show that volumes moved on deepsea services rose to 169m teu, an increase of almost 1% on 2018 levels. That compares with 4% growth in 2018.

The measly growth figure is the lowest since 2009, when volumes slumped on the back of the global financial crisis.

Despite a significant and welcome traffic surge in December on the transpacific trade, as box numbers jumped 7.7% versus November, the overall count in 2019 on headhaul Far East-North America services fell 2.5% compared with 2018 to 18.8m teu, according to CTS.

Although strong performances were reported on other trades, additional volumes elsewhere were able to only partially offset the shortfall.

The US increased its seaborne exports of crude oil by 51% year on year to 133m tonnes in 2019, according to shipping association BIMCO, helped by a record-breaking month for shipments in December.

An all-time high of 13.9m tonnes was recorded in the final month of last year, up from 9.3m tonnes in December 2018 and 11.2m tonnes the previous month.

In an update earlier this week, BIMCO said that because of the US shale revolution, the country became a net seaborne crude oil exporter in October 2019, and the record-breaking exports in December solidified the trend as imports for the month reached 11.5m tonnes.

BIMCO expects the US to become a net seaborne crude oil exporter on an annual basis for the first time in 2020.

In the run-up to January 1, 2020 Lloyd’s List Intelligence was tracking the uptake of exhaust gas-cleaning systems, known as scrubbers, on vessels and is making this available to the market.

From March 1, ships without exhaust gas scrubbers installed will not be allowed to carry fuel exceeding 0.5% sulphur content in their fuel tanks.

LLI’s dataset on which ships have scrubbers installed can help charterers and suppliers identify vessels to proactively target.

The figures for January reveal oil tankers (986) and bulk carriers (958) have been most active in retrofitting scrubbers by vessel type.

Finally, the continuing impact of the coronavirus outbreak on ship calls to major Chinese ports was also revealed this week.

The extended Chinese New Year holiday shut down much of China’s manufacturing, resulting in fewer exports.

As a result, ship calls at Shanghai and Yangshang were lower compared with the same week last year, Lloyd’s List Intelligence data shows.

With the holiday extended in many parts of China to the end of last week, ship calls were down in week six (ended February 11), which coincided with the 2019 lunar holiday.

Negative BCI is the result of a ‘technicality’

Ask the Analyst: Compliance comes to the fore