Oil demand growth in China will slow to the lowest in 11 years, according to an International Energy Agency report. Total annual Chinese demand for refined products is estimated at 13.8m barrels per day 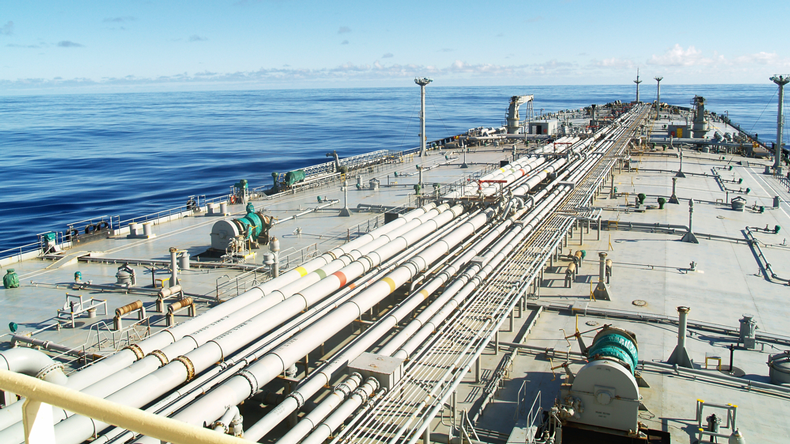 Source: Montenegro/Shutterstock.com Contracting Chinese demand in the first quarter of 2020 will further pressure earnings for shipowners of larger tanker types.

Global oil demand growth this year is expected to be the lowest since 2008, based on forecasts released this week from the International Energy Agency and the Organisation of the Petroleum Exporting Countries.

There will be a “significant impact” on the global economy as a result of the coronavirus outbreak the IEA said in its monthly oil report published today. Oil demand growth in China — the biggest importer of seaborne crude — will slow to the lowest point in 11 years, the report said.

Total Chinese demand for refined products is now estimated at 13.8m barrels per day, 1.1% above the previous year, according to the IEA. 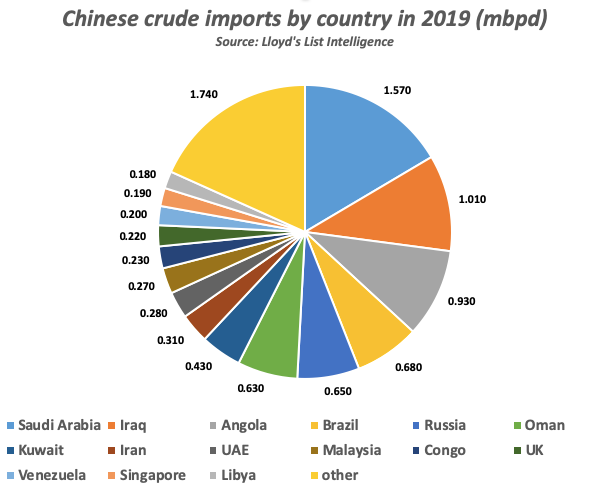 These IEA numbers suggest that contracting Chinese demand for gasoline, jet fuel and gasoil/diesel oil will likely flood the Pacific Basin with surplus cargoes of middle distillates from the country’s refineries.

Any surplus would impact refinery margins, lower prices and trigger arbitrage trades to Europe, the biggest buyer of diesel, gasoil and jet fuel.

Saudi Arabia, Iraq and Angola are the three biggest suppliers of crude to China, followed by Oman and Brazil.

All routes employ very large crude carriers or suezmax tankers so contracting demand in the first quarter of the year will further pressure earnings for shipowners of larger tanker types. Average VLCC time charter equivalent earnings have already collapsed 75% since January 24, to $12,223 a day, according to assessments by the London-based Baltic Exchange.

Suezmax and aframax rates have seen corresponding falls, as the coronavirus outbreak worsens the seasonally weakest performing quarter of the year for crude shipments.

Global refinery runs have also been estimated lower by the IEA, with a 500,000 bpd contraction for China anticipated in 2020, the IEA forecast. This means global runs will expand by only 700,000 bpd. 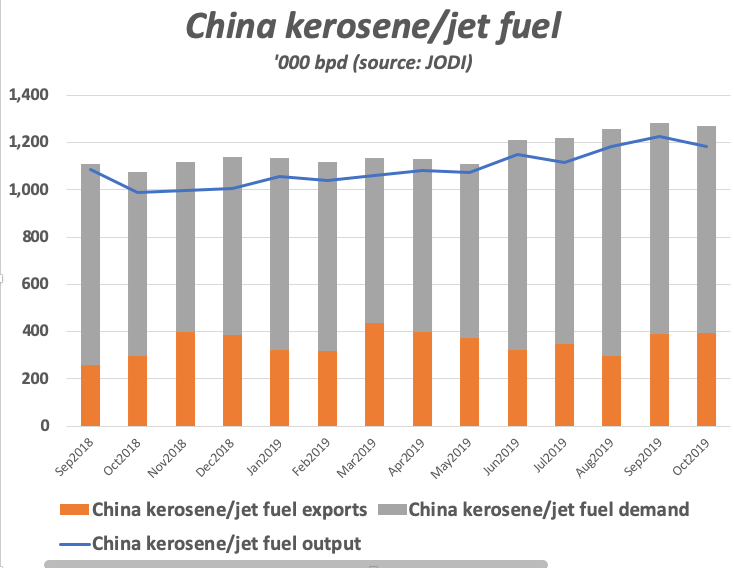 Specifically, transportation fuels, and particularly jet fuel will be hardest hit, with consequences for the global fleet of product tankers shipping these and other middle distillates including diesel and gasoil.

The impact will be felt within intra-Asia routes employing medium range tankers, as well as long-range routes from the Middle East Gulf to Europe, and arbitrage trades to Europe from India, Singapore, China and South Korea.

China accounts for about 14%, or 957,000 bpd, of the global kerosene/jet fuel consumption, based on figures reported to the Joint Organisation Data Initiative. Rising demand for jet fuel is a top driver of oil demand growth for China.

“Chinese air transportation has surged with the construction of new infrastructure and the development of a wealthy middle-class,” said the IEA in its annual report.  “We estimate that in the early phase of the current emergency, China’s international air traffic fell 70% and domestic traffic declined by 50%.”

The report said that Chinese jet fuel demand was estimated to be 14% lower than previous IEA forecasts, and overall Asia Pacific jet fuel deliveries will be 5% lower in this quarter of the year and 8% in the second quarter of 2020.

Chinese exports of jet fuel topped nearly 400,000 bpd in October, 2019, the last month for which Jodi figures are available, exceeding South Korea’s exports at 315,000 bpd. Hong Kong imports were at 233,000 bpd, suggesting that just over half of the Chinese shipments went to the administrative region, which reports statistics separately from Jodi. 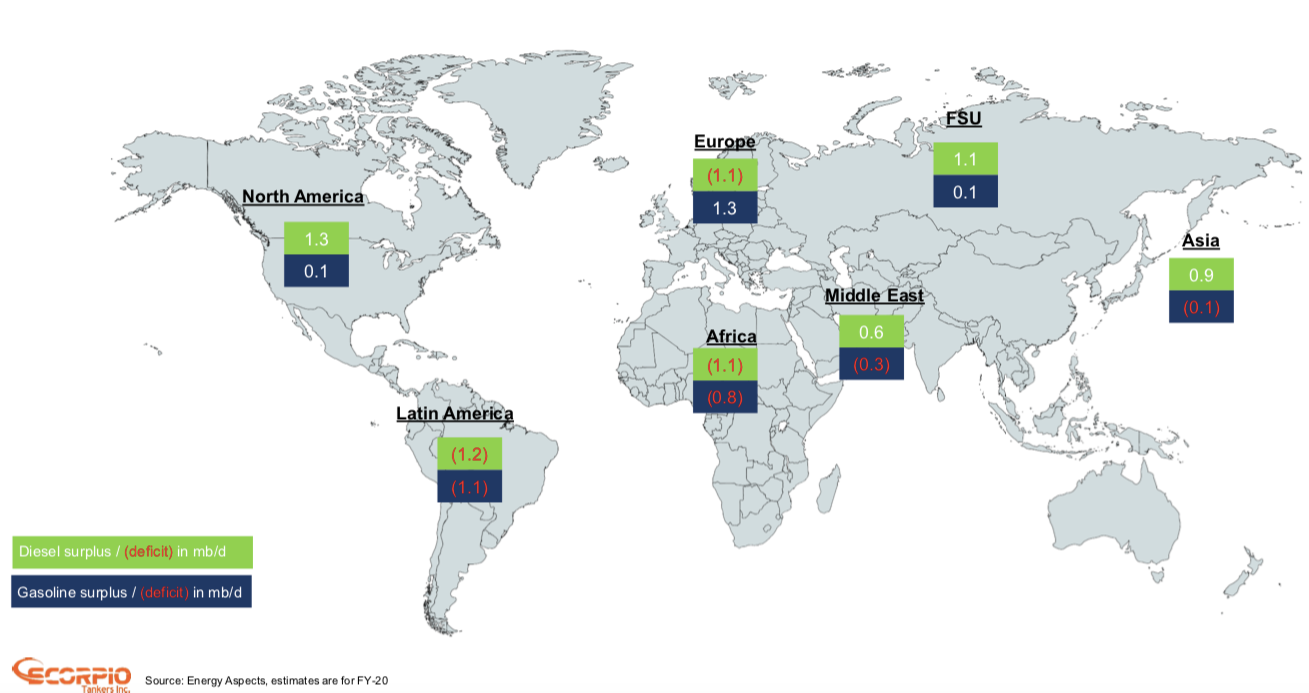 Scorpio Tankers, which operates 126 product tankers, outlined a diesel surplus of 900,000 bpd in the Asia region and 600,000 from the Middle East in 2020, with a deficit of 1.1m bpd in Europe in a February 11 presentation. The Middle East is the biggest supplier of jet fuel to Europe.

Since January 24, average time charter equivalent earnings for MR tankers in the Pacific have declined to $9,571 daily, from $16,716 on January 20. The changeover to higher cost low-sulphur fuel on January 1, has already dented earnings which were some $9,000 higher at the end of the year.