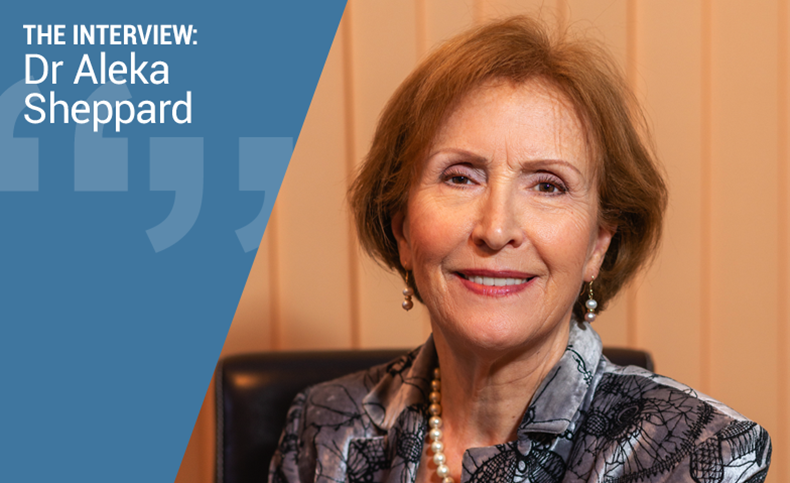 THE year is 1994. Whigfield’s song Saturday Night is packing out the dance floors, Netscape Navigator is the leading browser for the still-nascent internet, and the world is looking on in horror at the Rwanda genocide and the Yugoslav civil war, even as it is heartened by South Africa’s first multiracial elections.

And Dr Aleka Sheppard has just launched the London Shipping Law Centre as a forum for the industry to discuss shipping, commercial law and dispute resolution issues in the UK capital.

“I was perhaps naively enthusiastic then. But I had the instinct that this was going to be the unique centre, that moulds knowledge, not just law,” she recalls, as we sit down over coffee at the organisation’s offices at Quadrant Chambers in Fleet Street. But the naïve enthusiasm has surely paid off.

LSLC celebrated its 25th anniversary last year and is still going strong, attracting support from across the industry for its extensive programme of seminars, debates and social events, which included a celebratory dinner at the Savoy last November.

Presentations attract audiences of up to 150, who come to hear QCs, barristers, arbitrators, shipowners, solicitors, shipbrokers, mariners, technical experts and representatives of public bodies hammer out the big issues.

Back at the beginning, Ms Sheppard was teaching shipping law at University College London, then as now hailed as one of Britain’s top universities.

Realising that she was missing day-to-day contact with people at the shipping coalface, she saw the need to bridge the gap between academia, legal practitioners, commercial people, engineers and technicians.

“These sectors didn’t know each other,” she relates. “They were not coming together to exchange knowledge. And that was the main purpose, to bring all the sectors together, to exchange the variety of knowledge each sector had.”

She started calling up contacts, including the top brass at the big-name shipping law firms, and asked them if they would be willing to sign up for her pet project’s steering committee.

The late Lord Mustill —one of the Law Lords who sat in the House of Lords prior to the creation of the Supreme Court in 2009 — agreed to act as president.

“Everybody said yes. It’s like a sweet pill. ‘This is wonderful’, they said. ‘Why haven’t we had this before, we’d love to be involved’.”

LSLC prides itself on its flexibility, in the realisation that nobody actually needs extra committee meetings. Thanks to modern communications technology, these can be kept to three or four a year, with an obligatory annual general meeting to sign off the accounts. Funding is by way of subscription income and sponsorship.

Initially it was formally affiliated with UCL, but that arrangement ceased in 2006, after the two sides fell out and Ms Sheppard resigned her position.

“UCL had not seen the light and the usefulness of the centre. I was killing myself because I had to teach, I had to write, and the centre was prejudiced because of the pressures of academia,” she says.

“I asked them to appoint an assistant lecturer and they didn’t want to spend money. They said ‘You have a centre, you have people behind you, ask them to put in money for the lectureship’.

“It was like a tennis ball and going back and forth. I was bringing in people from the bar to help me. And they were helping me, but UCL were very, very, very crafty.

“They said, ‘Oh, we don't need money for the centre, because Aleka is bringing all of these part-timers for free. And we will put money in other areas’.”

Tired of the LSLC’s status as a Cinderella — at least as Dr Sheppard saw it — she quit her position. Luckily, an American business engaged in risk management in aviation and seeking to get into shipping was ready to provide new office space at International House at St Katherine Docks, also known as the World Trade Centre.

A number of years later that company wanted to move, and the centre arrived at its current base in Quadrant Chambers.

Dr Sheppard herself remains as founder and chair on an unpaid basis, but LSLC employs a salaried full-time manager, himself a qualified barrister, as well as some part-timers and consultants.

Alexandra Mandaraka Sheppard was born in 1949, on the Greek island of Andros. Her father was in the wood business, and the family had no particular connection with shipping.

A bright pupil at the local schools provided by shipowners, she went to law school in Athens in the 1970s, while Greece was still under military dictatorship. Her initial ambition was to be a creative writer.

“First, I needed a scholarship. And because I had good marks, a first-class degree, I got one from a shipowner, Chandris. And I had to do shipping, because this was a shipping scholarship.”

One of the options she took was psychology and law, which led her to a PhD in social psychology and human behaviour from King’s College. The thesis was converted to a scholarly book, The Dynamics of Aggression in Women’s Prisons in England, in 1986.

“But it was karma again, I just had to be in shipping, it pulled me back, because there were no jobs in psychology, whatever you do with a PhD.”

In a sense, she had never really left shipping, anyway, because she funded postgraduate studies by working for law firm Richards Butler and insurer Sedgwick Forbes, both well-known at the time but subsequently swallowed up by larger players.

Eventually she became a trainee solicitor at Holman Fenwick Willan, today’s HFW, in 1982. She specialised in contentious cases, or what she wickedly describes as “lovely shipping accidents”, of the type that happen far less frequently in this era of rising safety standards.

That necessitated reading even more textbooks, as at time it was necessary to convert her Greek law degree into an English law degree, through five years of evening study.

It was at Holman Fenwick Willan that she met her husband, now deceased, and became a mother. Tragically losing her first child to meningitis in 1985, the birth of a second led her to reject the long hours culture prevalent among law firms at the time, and take the teaching job at UCL in the hope of getting more time with her boy.

“Actually, this is very current, because we’re still fighting for women’s rights to have time to look after their children, to have more flexibility. The world is getting better, but not perfect.

“It wasn’t only Holman’s, no firm would then allow a woman to leave early for the children, they had to have nannies to stay late and you prove themselves. There were no rights for women. You need to write that down, actually.”

Dr Sheppard lives in Chiswick, with an easy commute to Quadrant Chambers via the District Line. But having reached an age when many city dwellers contemplate moving out to the sticks, she is actually looking for a more central London home.

She is, in her own words, “just not a country person”. What’s more, she doesn’t like driving, and wants to be closer to London’s cultural offerings.

Meanwhile, her son is now a grown-up barrister, after taking a first in classics at Oxford, as perhaps befits the offspring of a Greek mother, and going on to get a law degree from Cambridge at mum’s insistence.

“If you want to become a barrister, you’ve got to have the foundations of English law, taught by a good university. So he went back to Cambridge.”

In her spare time, she enjoys exercising, especially yoga and Pilates, and listens to a lot of classical music, naming Mozart and the “very powerful and vibrant” Verdi as her favourite composers. She also goes to the theatre, and reads heavily, including the Greek writers she has been reading since childhood.

“I like polymathy. Law does dry the imagination, and you have got to do lateral thinking, psychology, philosophy, politics.” She makes time for television and Netflix, as well, particularly for war documentaries.

Dr Sheppard also keeps a second home in Greece, which she visits almost every month on business, and makes sure she keeps up with the family while she’s there.

So, what next? In the wake of Brexit, LSLC will be kept busy promoting London as a shipping centre, even as other countries in the Middle East and Far East begin promoting themselves as dispute resolution jurisdictions under English law. And she is convinced that the work of the centre will outlast her.

“I won’t be alive then, but the younger people will do it,” she insists. “Of course we will be here. I started this organisation, which really was set up because it was needed. It’s not going to die, because we’ve got great support.”