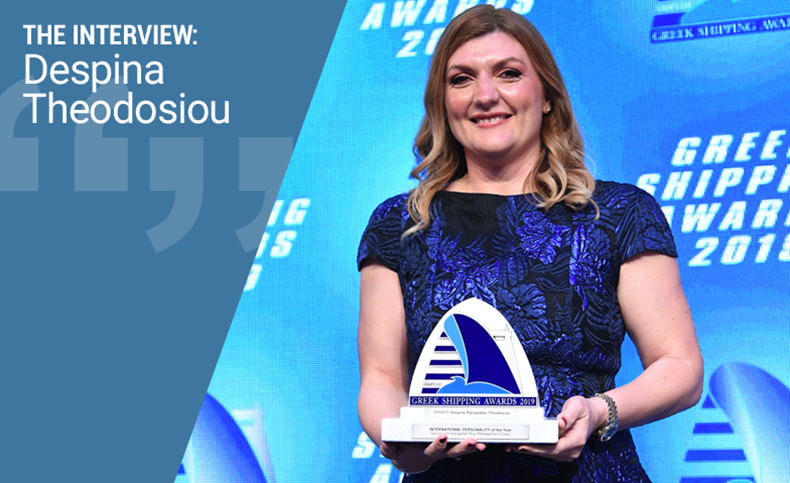 DESPINA Theodosiou’s dedication to gender equality in the maritime sector is bearing fruit.

Her perseverance has seen the Women’s International Shipping & Trading Association, which she leads, grow to 50 countries.

Last year alone, four new National Women’s Associations, as they are known, joined the group, while a fifth — South Africa — was reformed and welcomed back.

Wista’s reach is far-ranging, with Romania the latest to join in December, following sign-ups from Colombia, Mexico and Bangladesh.

Ms Theodosiou, who was re-elected in November as president of Wista for a second two-year term, is helping to build the organisation into a body that has a relevant voice.

The 38-year-old is adamant that more can be done to address the gender imbalance in the industry.

“We are of the conviction that gender diversity is key to providing a sustainable future for our industry,” says Ms Theodosiou, the daughter of a captain who has been working in shipping for 16 years.

"After the huge drive in awareness we achieved in 2019, the pressure is on to ensure that the change continues and a new normal emerges."

The various initiatives to include more women in the industry are gaining momentum, with an emphasis too on attracting the younger generation to a sector that has largely been male-dominated.

“This is an exciting and momentous time in our industry, and I am humbled and grateful to be a part of it,” she continues.

There are many different roles within maritime, not just seafaring, that could make a good career for someone coming into the sector.

“We need to showcase to young girls and their parents that a maritime career is a rewarding one, that after they graduate from maritime academies, and from their shipping-related studies, they will find doors open to companies who are looking for the best talent, regardless of gender,” Ms Theodosiou says.

Wista, in collaboration with the Institute of Chartered Shipbrokers, offers scholarships to women over a 10-year period. The programme, which is in its third year, is currently helping five females from different countries to achieve their goals.

Ms Theodosiou has won many awards but she does not just bask in the glory; she strives for more, because more can be done.

“There are still preconceptions and prejudices, which often become hurdles to women who want careers in shipping, trading, and logistics,” she says. “We are overcoming them, slowly but steadily.”

“We see more women coming into the frontline, acting as role models for the younger generations,” she notes. “We also see open-minded men and women in the industry who understand that diverse businesses have a greater chance at success.”

Ms Theodosiou has been described as a rising star, a powerhouse, a problem-solver with a sharp mind. She is also humble and gracious about her work as an ambassador for equal rights.

While networking and travelling, Ms Theodosiou co-runs Tototheo Maritime, a Cyprus-based technology systems company specialising in services with the goal of optimising vessel and fleet performance, with her husband Socrates.

She won the International Personality of the Year award at the Lloyd’s List Greek ceremony held in Athens in December and appeared in the Lloyd’s List Top 100 influencers in shipping last year.

Formalising ties with the IMO

It was through her hard work and that of her teams that Wista received consultative status at the International Maritime Organization last year, a breakthrough, giving it access to the 174-member states of the UN agency.

Earlier this month, Wista and the IMO cemented ties, formalising their co-operation with a memorandum of understanding.

The two bodies aim to collect and analyse data on the number of women working in the sector globally and develop a database of female experts to tap into.

The IMO’s theme for last year was “Empowering Women in the Maritime Community” and Wista’s theme for this year centres around sustainability and continuity driving growth.

Many more tie-ups have been sealed while Ms Theodosiou has been at the helm of the group, which has more than 3,000 members.

In November, an MoU was signed with the World Ocean Council, while it is actively involved with the International Chamber of Shipping's diversity panels to the extent that Ms Theodosiou chairs the Women in Shipping panel.

Other collaborations include pledges with BIMCO, Intertanko and Nor-Shipping. As testament to the progress made so far, commodities trading giant Cargill has said it would not attend events with male-only speakers.

Wista has also co-published a booklet on better working conditions for women in employment on board ships.

“Our industry is moving with the times. Things have started to shift towards more diverse, inclusive, and tolerant working environments,” Ms Theodosiou points out. “Today, women have a growing voice in the shipping industry” and Wista ensures that women are not only part of the solution to the challenges faced, but are also part of the future.

Wista’s motto is “women who move the world”. Ms Theodosiou is certainly one of them.