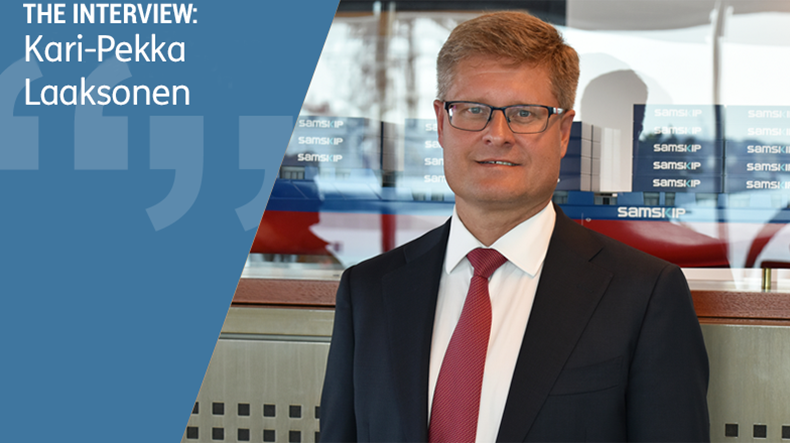 Hero quote: “There is still a place for specialists within the European logistics business.”

Samskip’s new chief executive says that the efforts to expand into the shortsea and logistics space by deepsea carriers only go to show the value of its offering.

The success of Europe’s regional specialist Samskip adds weight to the theory. A multimodal offering, encompassing sea, road and rail, provides customers with an end-to-end logistics solution with that increasingly desired and crucial last mile delivery.

But as deepsea carriers look to replicate this model and enhance their presence in the logistics space through vertical integration, linking ocean services with the hinterland and beyond, one might expect the Netherlands-based company to be concerned by this increasing level of competition.

However, Samskip chief executive Kari-Pekka Laaksonen is convinced that it is insulated against exposure in an increasingly squeezed market, and there is still room for the little guy.

Speaking exclusively to Lloyd’s List he says that by addressing the importance of the last mile and end-to-end solution, the core of Samskip’s business can only be positive. It shows that these companies are starting to realise its value.

“So, you might feel that it increases the competition and the pressure on us, but I think it is always a good thing and ensures all of us are creating more and more efficient solutions for customers,” he says.

“There is still a place for specialists within the European logistics business.”

Even so, for the major carriers developing on the basis of vertical integration he says that an efficient inland network is no mean feat.

Linking up with a local player is one option, and so too is acquiring a regional company with the necessary expertise, says Mr Laaksonen.

Although the deepsea carriers have the competitive edge when it comes to certain elements of the supply chain, such as access to resources, lower slot costs and wider ocean coverage, this localised knowledge never comes easily, he says.

Indeed, Samskip knows only too well the benefits of this regional know-how.

The concentration of the shortsea sector in recent years has not only been down to the major carriers but also due a series of mergers and acquisitions from within the sector.

Samskip has been at the centre of a consolidation wave in the European shortsea shipping market.

Active members of the European shortsea market have dwindled in size in recent years. While deepsea carriers have played a significant part, including CMA CGM’s acquisition of Containerships, Samskip has arguably been the most active on the acquisition front. The group has recently completed takeovers of Nor Lines and Euro Container Lines, in addition to Samskip Logistics.

Mr Laaksonen, who joined Samskip in September from Containerships, having successfully overseen the CMA CGM takeover, has been charged with combining the group’s latest ventures into one integrated business.

The addition of Nor Lines to the portfolio has enhanced the group’s longstanding presence in Norway, where the group’s fledgling container operations began more than two decades ago, while acquiring Euro Container Lines helped connect Samskip with the Continent’s giant ports in Rotterdam and Hamburg. The takeover of Samskip Logistics has enabled the group to advance its offering in the reefer shipping segment.

Each acquisition has added a much-needed regional focus to the group’s overall proposition to customers.

Mr Laaksonen does not rule out the prospect of further merger and acquisition activity if similar opportunities arise, although the group does not currently have anything “actively in the loop”.

While Samskip may be open to M&A activity of its own, given the recent trend of the major deepsea carriers expanding their regional presence, it does beg the question as to whether it could become the next subject of a high-profile takeover. Given its strength in Scandinavia and the lucrative UK market, in addition to its significant inland network incorporating both road and rail, Samskip would certainly be an attractive proposition for those looking to expand in Europe.

Mr Laaksonen emphasises that any talk of a takeover would be a question for the owners.

For now, he says, Samskip will continue developing its own business and if someone is interested then he is no doubt that they will approach the company. The short- to medium-term focus and group priority is to fully digitalise the Samskip network with the integration and roll-out of new IT systems.

“We are introducing totally new [IT] systems and this is going to take us at least a couple of years.”

This ‘digital transformation’ will take Samskip to a different level and one that is needed to remain competitive, according to Mr Laaksonen.
Samskip is also eyeing other ventures that could add value to the business.

Last year, Samskip announced it was the lead partner in Seashuttle, a project seeking to bring to market emissions-free autonomous containerships that operate at a profit.

Seashuttle is still in its development stage. However, the initial plan is to deploy two all-electric ships, powered by hydrogen fuel cells, connecting Poland with ports in western Sweden and the Oslo fjord, Norway.

Mr Laaksonen says that if other projects become available that are equally attractive where Samskip could invest, then he is also “totally for, looking into these kind of things”.

One thing to the company’s advantage is how a significant volume of its fleet, comprising 22 vessels either owned or chartered, operate predominately in Europe’s Sulphur Emission Control Areas (SECA), which has been in effect since 2015. In the SECAs, sulphur emissions from burning bunker fuel are already limited to 0.1% compared to the 0.5% stipulated by the International Maritime Organization’s regulation.

Nevertheless, Mr Laaksonen says that the cost burden of meeting these new requirements will be difficult for the industry to absorb, particularly for a smaller player such as Samskip compared to their larger counterparts.

The initial plan is to switch to low-sulphur fuel oil. However, he revealed that the company is in negotiations over a handful of scrubber solutions.
LSFOs, or indeed scrubbers, are not a long-term solution if the industry is to further its green endeavours.

The acquisition of Nor Lines added LNG-fuelled ships to the Samskip fleet, enabling the group to study its effectiveness as a marine fuel first-hand.

However, the group is also studying the viability of other alternative fuels and keeping its options open.

“We need to find the right technology or fuel that we believe in for the future. Whether that is LNG or something else is something everyone is working on at this moment in time,” says Mr Laaksonen.

For now, it is about getting down to basics. The group plans to hunker down and build on where it currently holds a prominent market position.

In addition to a strong Norwegian foothold, Samskip is also an important player across Scandinavia, and notably Sweden from where its extensive road and rail network links to the European mainland. Iceland too is also of significance to the operator. Not only is it where the company has its roots, but also it is the base for its business in the North Atlantic to serve the fish industry.

The UK is also integral for Samskip, with the British Isles representing the largest volumes and concentration of business outside Scandinavia.

“Samskip has a significance in the niche corridors we operate. If you have the tools, whether you're big or small it doesn't really matter it goes to show, there is space for the companies like us,” saysMr Laaksonen.

HMM warns of ‘considerable’ uncertainty in 2020