The Port of Long Beach executive director Mario Cordero says the Sino-US trade war has had an impact on his port just by the fact that China is ‘our major dependency in terms of our business, both on the import and export side’. 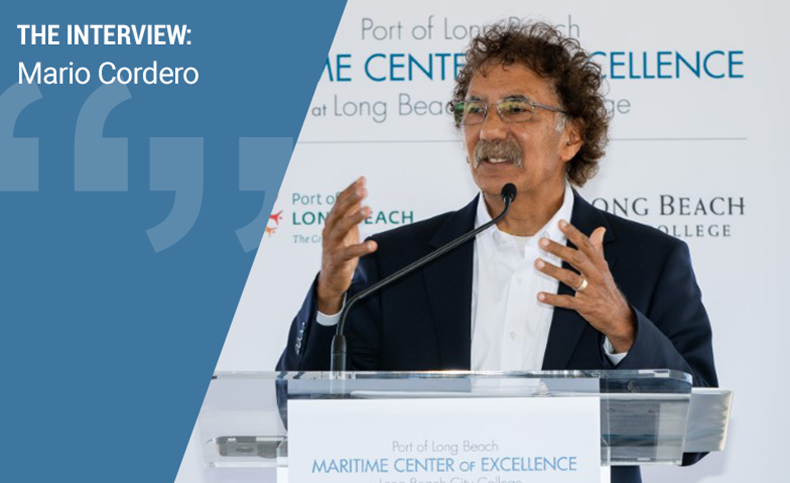 The Port of Long Beach executive director Mario Cordero says the Sino-US trade war has had an impact on his port just by the fact that China is ‘our major dependency in terms of our business, both on the import and export side’.

Impact of the trade war

MARIO CORDERO takes obvious pride in his work as executive director of the Port of Long Beach, and what makes him particularly proud is the port’s record on sustainable development.

By that, he means partnering with the neighbourhoods and the community “to reduce the impacts of port operations, more specifically harmful emissions, and at the same time be able to grow our business”.

In fact, Mr Cordero believes “there is no other port complex in the nation — and probably, for that matter, in the world — that has been able to progress with a twofold objective” of going green while growing the business.

He notes with satisfaction that the “nay-sayers” — the people who long ago opposed the port's turn to green policies for fear of losing business — have been proven wrong. Indeed, just last year, he points out, “we moved 8.1m containers and it was a record year in our 107-year history”.

There is a connection between the port's green policy and the growth of its business, he says, especially as corporations in America “are now recognising” their corporate responsibility.

“So, this is rather interesting because if that's an emphasis for any given beneficial cargo owner, then my question to them is: ‘Isn’t Long Beach a great partner to further your business in that role?’.”

He sees the Port of Long Beach at the “top of the list” in terms of furthering its international trade opportunities while also addressing in a “corporate responsibility fashion” some critical issues that impact urban communities.

Mr Cordero knows the community surrounding the port very well. A native of Los Angeles, he went to Gardena High School and then to Long Beach State University where he studied political science and met his wife of 45 years.

After university, he attended Santa Clara University in northern California, earning his law degree in 1978. He practised as a workers’ compensation attorney before being appointed as a Long Beach port commissioner in 2003.

He continued to practise law full time as his role in the commission was a “civil commitment” and not a paying proposition. But lucrative or not, through the position Mr Cordero became “enthralled by this industry” which “really sparked his interest”.

In 2011, he was appointed chairman of the Federal Maritime Commission by President Barack Obama which, he says, “was a gratifying experience for the next six years”. In 2017, with the coming of the Trump administration, he resigned to take up his present role as executive director of the Port of Long Beach.

“So, I'm back to where I started,” he says, but also gratified to have the opportunity to work with a staff of 600 and “be part of a dynamic in terms of how the west coast continues to be a major player as a gateway to the most important trade region to the country, which is Asia”.

Indeed, he says that during his time at the Federal Maritime Commission, the federal agency that monitors the trends in waterborne transportation, “no one would disagree that the transpacific trade route is the major trade route for this nation”.

Impact of the trade war

He says that a result of that dependence on the transpacific trade corridor, the port of Long Beach has been hit hard by the tariffs imposed by China and the US on each other’s goods.

He says the trade war has had an impact on the port by the mere fact that China is “our major dependency in terms of our business, both on the import and export side”. In fact, he says, “we're at ground zero for trade with China”.

He says the impact has been “even worse for the export side for the same period in question. It’s been a 41% negative impact. So you know, I think you can most definitively state that it has been a big impact.”

Worse still, however, is what he sees as the lost opportunity for increased growth, saying that “not only have we had an impact, but we certainly lost the opportunity to have either much greater strides than we did in 2018”.

Still, he sees the recently announced phase one agreement between the US and China as “good news”.

“So going forward to 2020, we're hopeful. We look to the culmination of what those specifics are in phase one. And then of course, start moving towards phase two,” he says.

Mr Cordero acknowledges that events other than the trade war have also adversely affected the port of Long Beach, in particular the widening of the Suez and Panama canals which have drawn throughput away from the US west coast to the US Gulf and east coasts.

But he is sanguine about the situation, saying that “we are seeing an evolution of the carrier industry” and also an “evolution of the other gateways in the United States. So for the nation that's good news”.

He says that evolution of carriers and ports was “going to happen” and has happened “no matter what the ports on the west coast did”. He says “we have to acknowledge” that “our competitors are in a better position to receive the larger vessels than they were some years ago”.

Still, he is not prepared to concede an also-ran status for the west coast ports, especially the twin ports of Long Beach and Los Angeles.

“I can't worry about what the east coast ports are doing or the Gulf are doing. I need to focus on what we need to do to continue to be a port of choice and be leaders in sustainable development and operational excellence,” he says.

But he has no hesitation in reminding the competition of just how productive are the twin San Pedro Bay ports — Long Beach and Los Angeles — when it comes to throughput.

“There is no port complex in the nation that even approximates what we move here in the San Pedro Bay ports,” he says, noting that the two ports moved “in excess of” 17m teu last year.

“No one comes close to that number,” he says. “You could argue New York may move 7.4 or whatever that number is. That’s not even half of what we move here. So, I want everybody to be aware that you understand that dynamic before we make any assumptions in terms of who’s the leading gateway here now.”

Mr Cordero understands the nature of the competition with rival ports on the east and Gulf coasts. In his view the aim is to “be a port of choice to the most important region to this country, which is Asia”.

He does not think it is enough for the San Pedro Bay ports merely to accommodate the regional market of 40m people that California offers.

“In addition to that,” he says, “the battleground is the Midwest, the Ohio Valley. And, and with that, you know, we have in the west coast, the best railroad infrastructure — far superior than any other region in United States.”

“So, the question for us again is continuing with the productivity numbers that remain competitive and also for us to ask ourselves the hard questions: ‘How do we become more cost-effective?’ And I think that's the $64,000 question for us in the year of 2020.”