Viewpoint: Is trade bad for shipping?

The message of climate activists regarding shipping is one of doom and utter negativity. This is because there is no point scoring from the industry’s constant incremental improvements, from a whole range of technical and operational advances that are being undertaken

The shrieking voices of impatient climate activism need to pipe down and become better educated on maritime matters. The industry is changing to make itself sustainable, but grandstanding activists have not bothered to find out how 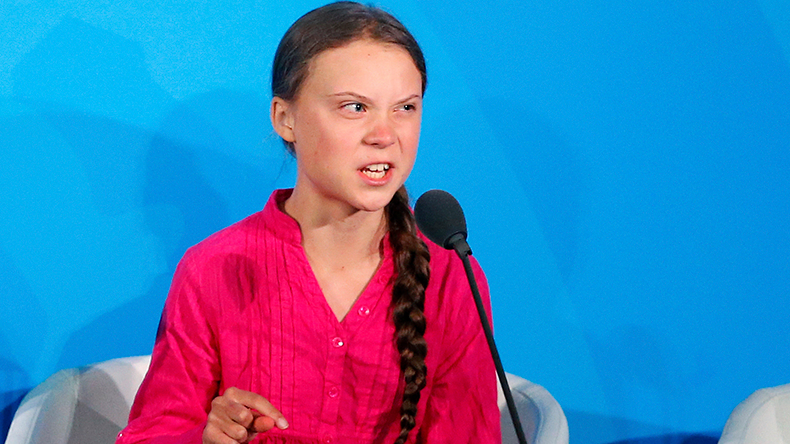 Source: © 2019 Jason DeCrow / AP Photo The sad thing is that too many politicians indulge people who protest about carbon emissions, such as Swedish teenager Greta Thunberg, without giving the shipping industry due credit for making changes.

THERE seems no doubt that the shipping industry is firmly in the firing line regarding its emissions, and that whatever it does to mitigate the situation, it will not be enough.

You realise there is no hiding place when even the tabloids have lurid headlines about MSC being in the top 10 CO2 polluters in the European Union. Faithfully reproducing the statistics sensationally revealed by that objective organisation Transport & Environment, the public is now invited to shudder every time one of their containers passes on its way to and from the ports.

This sort of blackguarding of an essential industry is now becoming habitual, from those with an environmental axe to grind, and the message is getting through. It is probably only time before a 23,000 teu containership is unable to leave its berth because an Extinction Rebellion fanatic has glued himself to the bollard holding the headline, while a weeping Swedish teenager lies down in front of the terminal gate. It is probably time to reinforce the security.

The message is one of doom and utter negativity. There is no understanding about the magnitude of the task facing all industry, with shipping as a vast consumer of oil fuel and mainly driven by powerful diesels.

You cannot stop trade, because people need goods and ships carry most of it around. You cannot invent new transport technologies overnight, no matter how loudly the activists bellow and even if you could, you cannot expect that they could be adopted by the world’s fleet to some daft prescribed timetable rolled out by activists.

Progress is far too slow, bewail the greens, who seem to expect that the politicians take all their messages on board, regardless of their dire economic consequences and roll out policies that will put them into place. The sad thing is that too many politicians indulge these people.

There is, of course, no political kudos to be obtained from the industry’s constant incremental improvements, from a whole range of technical and operational advances that are being undertaken.

If a major carrier reveals that its carbon emissions have been reduced by 25% inside five years, it will only be papers such as this one which will publish the news. It doesn’t resonate with what the doomsayers want to see and hear in their mainstream media.

There is no credit given for the huge improvements in fuel consumption that have been achieved by energetic engine makers, none whatsoever for the substantial reduction in emissions from steaming slower, or operating rather more cleverly.

Nobody is interested in the substantial benefits from better engine tuning, smoother coatings and polished propellers in more efficient waterflows and hydrodynamic advances which have been considerable. True, each of such improvements may offer efficiency savings in single figures, but the aggregate is what matters.

You would not think that the shipping industry learns from technology, and that each new ship will probably incorporate advances that have been shown to be effective on its predecessors.

It is not immediate enough to satisfy those forecasting the imminent destruction of our planet, who may thrill to accounts of battery driven excursion boats and globe-girdling voyages of experimental solar powered yachts.

People probably think that extrapolating these developments (which deserve great credit) into ocean-going ships carrying all the stuff we need, is not happening because of shipowners’ lack of imagination. Sadly there are exceedingly deluded folk who fail to recognise the advantages of global trade and are oblivious of the harm that would be done if we all returned to some sort of grim dystopian past of local, or even national, self-containment.

We ought to confront these negative souls rather more robustly, because the shipping industry is well aware of the challenges it faces on the sustainability front, not least the timescale it must adhere to “decarbonise”.

But if you keep your eyes and ears open, and are less impressed by the messages of climate doom, scarcely a day goes by without reading of some development that will improve the situation.

Much of it is experimental, and its application to large ocean-going ships will clearly take time. But there are very large ferries under construction that will operate with hybrid power plants and will emit little to harm the environment. LNG, which most recognise is a “bridge” between heavy oil and something sans hydrocarbon, is really beginning to break into several trades as its infrastructure expands.

There is advanced research into the use of hydrogen fuel cells and serious experiments taking place to determine the feasibility of wind to help an ocean-going ship along.

Of course it is slow, it is expensive and has to be financed by an industry that operates with tiny margins, and that is when the market is in its favour.

But it is not an industry that is dragging its feet and the shrieking voices of impatient climate activism need to pipe down and become better educated on maritime matters, before their next critical utterances.