More than half of respondents in the Lloyd’s List Outlook survey said fuel technology was a greater challenge over the next five years than regulatory, supply chain digitalisation and change management issues 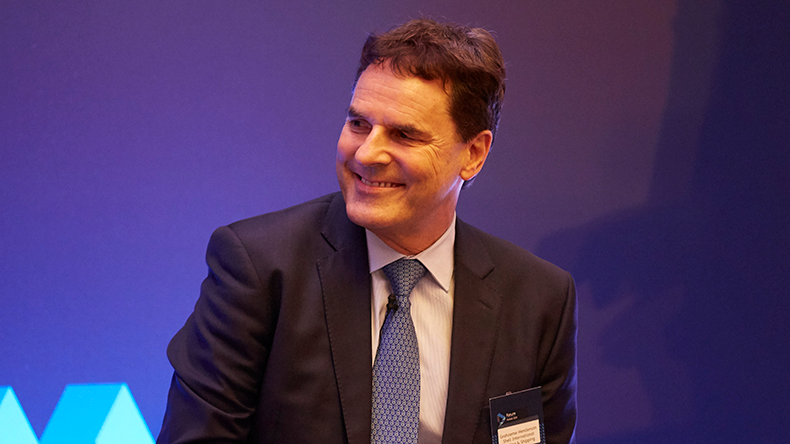 Henderson: We should be doing the very best that we can do today, not sitting back and waiting.

THE world’s second-biggest charterer of tankers says shipowners and operators must take all practical steps available right now to cut vessel greenhouse gas emissions, amid rising uncertainty over which marine fuels will best for long-term use to meet decarbonisation targets.

Grahaeme Henderson, vice-president of shipping and maritime for oil major Shell, said delays in addressing decarbonisation was the biggest threat to shipping over the next five years. Emissions could be as much as 60% to 70% lower on the newest, liquefied natural gas-fuelled vessels, he told the Lloyd’s List Outlook 2020 forum, held in London on Tuesday (December 10).

“We should be doing the very best that we can do today, not sitting back and waiting,” Mr Henderson said. Shell chartered nearly 700 tankers in the spot market last year and is the third-party operator of a further 200, giving the oil company an influential voice in shipping’s decarbonisation debate.

Uncertainty over fuel strategies emerged as the greatest challenge to operational efficiency in shipping in the Lloyd’s List Outlook survey. Some 51% of survey respondents said fuel technology was a greater challenge over the next five years than regulatory, supply chain digitalisation and change management issues.

The global commercial fleet of some 60,000 vessels must halve greenhouse gas emissions by 2030 and reach zero by 2050 under new International Maritime Organisation targets. However, the decarbonisation agenda is accelerating faster than the development of zero-carbon fuel alternatives such as ammonia and green hydrogen to replace existing marine fuels.

“I don’t think that the fuel choice of the future has been made yet,” Mr Henderson told the forum. “There’s a long way to go on this, and the more that I look at these (future) fuels, the more that my technology team and Shell looks at these, the more we see challenges.”

Newbuilding orders are stalling amid fears that ships propelled by liquified natural gas or residual or distillate fuels may have a limited lifespan. There’s also rising concern that the slow adoption of LNG-fuelled engines is because it’s seen as a “transitional” marine fuel.

But the world’s largest classification society, DNV GL, signalled at the forum that gas might be used for longer than expected as a marine fuel.

“Many talk about gas as a fuel being a transition type of fuel. I’m not so certain that the transition will be short,” Knut Ørbeck-Nilssen, DNV GL Maritime chief executive, told the forum. Shipowners had only two choices today — to do nothing, or use LNG as a fuel, he said.

“We could even see in 2050 and beyond that gas as a fuel will still be a very attractive solution. Gas is absolutely a very viable solution now and will be for the next couple of decades,” he said.

The forum discussed recent challenges for a hydrogen-fuelled vessel trialled by Shell. Mr Henderson said hydrogen was chilled to a liquid at minus 253 degrees Celsius, compared to minus 162 degrees Celsius for LNG. As a result, Shell could not use the same inerting system for LNG.

Kathi Stenzel, the managing director for Intertanko said there were no regulations for shipping hydrogen, either as a fuel or as a cargo, and that the trial presented significant engineering challenges. Intertanko represents independent tanker owners shipping energy commodities for oil traders and companies.

Hydrogen was piped initially through the same pipe as LNG in the trial, she said. “There was liquid oxygen forming out of the air around it, which if course is incredibly dangerous and not to be recommended,” according to Ms Stenzel.

There’s no single solution for alternative fuels, she added. “Batteries and fuel cells might be the answer for the ferry sector and short sea shipping. LNG right now is [a solution for tankers] but it’s probably not getting us close to where we want to be [on carbon emission reductions].

Mr Henderson said technology needed to be developed with support from governments and industry to fund research and development alongside widespread collaboration.

Shell had trialled wind sails which had reduce fuel use by 8% and also used air lubrication, which reduced friction underneath ships to achieve a further 5% reduction in emissions. Digitalisation had cut fuel costs a further 15%, while a joint project with the Port of Rotterdam had reduced time in ports by 20%, again achieving emission savings, Mr Henderson said.

“If you then add to that LNG as a fuel, where an independent study has shown a reduction of emissions of 20%, we can get to a stage by reducing our emissions by something of an order of 60 to 70%.

“That reduces the [decarbonisation] challenge, so it’s not 100%, it’s something like 30 to 40%. Then we can look at mobile carbon capture on ships, and get to the situation where we’re making very big inroads on reducing carbon emissions.”