Zhao Jiong, chairman of Bocomm Leasing , climbs to the number one slot in the Lloyd's List finance ranking after the bank-backed Chinese lessor achieves a remarkable expansion in ship finance over the past 12 months

As part of our 2019 Top 100 most influential people in shipping series, we look at the prominent rivals in ship finance, where Chinese lenders remain the top players in the league 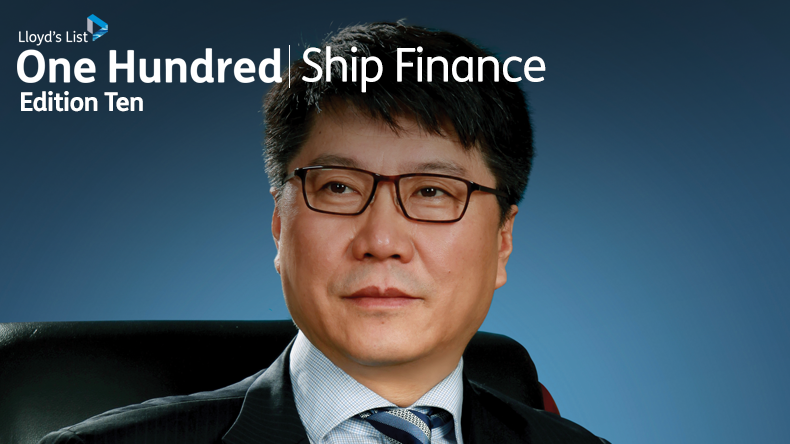 Zhao Jiong: Has kept a low profile as his company saw a remarkable expansion in ship finance this year.

ZHAO Jiong hardly appears in the media; nor does he often speak on public occasions.

However, the chairman’s habit of keeping a low profile does not prevent Bocomm Financial Leasing, a subsidiary of China’s Bank of Communications, from a remarkable expansion in ship finance this year.

Excluding offshore business, the company is the largest shipping lessor in China, with about Yuan80bn ($11.4bn) of vessel assets as of mid-November, Lloyd’s List understands.

It almost doubled the amount of invested capital in the sector from 2018 to about $3.5bn so far this year.

Various new deals were reported over the past 12 months, the foremost of which was the $750m orders of up to 10 very large ore carriers placed at Chinese yards in August.

The president of ICBC Leasing has good reason to be confident. His company is undoubtedly a top-notch player in this arena, with invested capital in shipping expected to reach $2.8bn this year and existing vessel assets (excluding offshore) to top $10bn.

The highlights of the leasing arm of Industrial and Commercial Bank of China, the world’s largest commercial bank by asset size, include the $600m tanker and bulker newbuilding projects on which it worked together with state-owned domestic owner, Shandong Shipping.

More recently, ICBC Leasing agreed on a $544m sale and leaseback deal for 10 Frontline suezmax tankers to be acquired from Trafigura.

COMPARED to its domestic leasing peers, which are in the ship finance limelight, the Export-Import Bank of China, also known as Cexim, appears to be moving backstage, with fewer deals reported in recent years. Yet it is by no means retreating.

For example, Bocomm Leasing revealed in January that Cexim, chaired by Hu Xiaolian, was its third-largest bank financing source.

The state lender is also a main stakeholder of the Silk Road Fund, which finances many shipping and port projects, including Cosco Shipping’s $6.3bn acquisition of Orient Overseas International Ltd.

According to the latest data published by Petrofin, the policy bank ranked at the top of a list of global shipping lenders, with an existing loan book worth $17.5bn at end-2018.

INDUSTRY veteran Michael Parker has been a long-term fixture in ship finance at Citigroup, one of the few western banks still lending money to shipping on any significant scale.

However, the past 12 months have been a landmark year for Mr Parker. That includes promotion to chairman of its shipping and logistics division, with the extremely capable Shreyas Chipalkatty stepping up into his old job as global head of shipping.

Part of his new brief will be to focus on the top bank’s environmental criteria for lending to the industry to the sector.

That is fitting, too, because Mr Parker is a key architect of the Poseidon Principles, a set of lending criteria unveiled by 11 banks in June, which make decarbonisation a central concern when considering loans to shipping companies.

IN the second year of his three-year term, Lee Donggull achieved one major milestone in 2019 with the signing of the Won2trn ($1.7bn) merger deal for Hyundai Heavy Industries and Daewoo Shipbuilding & Marine Engineering.

While not a done deal yet, this would have relieved the KDB chairman of one of his biggest headaches as the bank applied much of its efforts in recent years to helping the maritime sector, a key element of the South Korean economy.

Securing regulatory approvals from various jurisdictions are some of the hurdles the deal still faces.

However, Mr Lee already seems to be turning his attention to other important aspects of the economy. Those involves attempts to streamline operations of Seoul’s two policy banks — the key lenders to the country’s industrial sectors that include shipping and shipbuilding companies.

Earlier this year, he suggested the government should consider merging KDB and the Export-Import Bank of Korea for state budget efficiency.

ANDREAS Povlsen has built London-based Breakwater Capital into a significant player, starting from scratch as recently as 2011.

Indeed, he is known to pride himself on forming the kind of relationships with shipowners that used to be the preserve of old-school shipping bankers, building on the kind of industry knowledge that enables Breakwater to see beyond the short-term horizons of private equity.

Mr Povlsen has also made some great hires, most notably Robin Perkin, head of global shipping coverage at RBS before the axe fell, and former Investec shipping head Jeremy Dean.

Landmark Breakwater deals — the ones we know about, that is — include the arranged marriage of United Offshore Support and Hartmann Offshore under the UOS banner, creating a substantial presence in the anchor-handling tug support niche, and loan finance for Global Ship Lease boxship purchases.

Unlike some people in the investment bank space, he actually seems to know what it is doing.

He is also a regular fixture on the shipping conference circuit, where he has been notable for his stress on the use of environmental protection considerations when deciding on loan applications from shipowners.

“Capital is only going to flow in the direction of companies that are doing the right thing,” he argued in an interview with Lloyd’s List earlier this year.

Pension funds will not invest in companies that do not comply with ESG requirements and, while the acronym sounds like jargon now, in two years, everyone will have the message, he insisted.

Yet even at that much diminished level, it still ranks as a major lender to the industry — and Kristin Holth, DNB's global head of ocean industries, still claims her place as one of the leading women in ship finance.

Among the highlights of the year for Ms Holth has been her decision to throw the weight of DNB behind the Poseidon Principles, a set of yardsticks that ties ship lending decisions to environmental criteria, which were launched last June.

Ms Holth is a graduate of the Norwegian School of Management, where she studied international finance and earned an MSc in Business. Joining a forerunner of her current employer in 1984, she has been there ever since.

BERENBERG is that relative rarity, a European bank that is actually increasing its lending to the shipping sector at the moment, where it is said to be generating respectable yields on the back of low loan-to-value ratios.

Heading up the show is Philipp Wünschmann, its head of shipping. Mr Wünschmann previously worked for Commerzbank’s Deutsche Schiffsbank unit, where he was responsible for a $9bn book.

In addition to his banking jobs, he was also managing director of Erck Rickmers’ shipping interests prior to their sale to Zech Group.

Mr Wünschmann gets a lot of plaudits from his peers, too. “Nobody else is so respected and positively active in creative fields like him,” one of our friends in Hamburg tells us.

While the valuation was questioned by some industry observers before the deal, the yard-backed leasing house has since then fared steadily.

Net profit increased 11.7% to about $57m for the first half of 2019. The size of its leasing fleet — consisting of all types of commercial vessels — stood at 101 units as of end-June.

The business has been almost entirely built on the strong orderbook and credit support of its state-owned parent China State Shipbuilding Corp — now the world’s largest shipbuilding group after the recent merger.

Mr Yang (centre in the photo above) and his company’s performance will demonstrate whether such a business model can sustain its prosperity over time.

The Lloyd's List editorial board members are recognised experts who will provide feedback and guidance on all aspects of Lloyd’s List’s editorial output. All board members remain strictly neutral as far as any companies or organisations to which they are affiliated are concerned. You can find out more, and view a copy of the Lloyd's List Editorial Values here.