While the Lloyd’s List Top 100 has steadily started to feature more women in the ranks of industry influencers, the gender bias that this list reflects in the industry is still a deeply problematic issue yet to be resolved. Following the example set by the International Maritime Organization’s World Maritime Day theme for this year, Empowering Women in the Maritime Community, we felt it was important that the Top 100 project as a whole reflected more of the influential women steering companies, bodies and associations through these turbulent times

Before unveiling those who made it into the full Lloyd’s List Top 100 most influential people in shipping ranking, we highlight 10 influential women in shipping who have embodied the IMO’s theme of empowering women in the maritime community 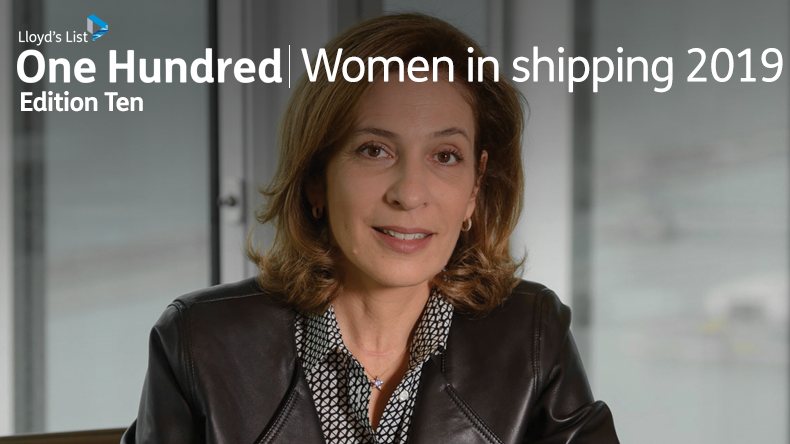 TANYA Saadé Zeenny has been a central figure behind the growth of CMA CGM, the French container shipping group founded by her late father Jacques Saadé and now headed by her brother Rodolphe.

She joined the family-owned group in 1995, just as CMA CGM was embarking on a period of rapid expansion, and was elected to the board in 2009.

INDUSTRY representation from its trade bodies has never been more crucial.

The growing complexity of the regulatory landscape requires expertise well beyond the traditional scope of what has previously been expected from shipping’s acronym soup of associations.

Happily, for the tanker sector, they have a secret weapon in the form of Kathi Stanzel, who has been steering Intertanko since 2012 with a quiet efficiency that belies her reputation as one of the most insightful and influential figures in the business.

She is the fifth managing director in the association’s 45-year history, but she is the first to bring an environmental and scientific background to the position, which is proving to be a key asset as the tanker sector navigates the difficult decarbonisation pathway from 2020 to 2050.

ANE Maersk Mc-Kinney Uggla has a shipping pedigree like no other.

The youngest of three daughters of the legendary Danish shipowner Maersk Mc-Kinney Moller, Ms Uggla has been the most closely involved in the Maersk family’s vast shipping empire.

Now in her early 70s, Ms Uggla has been a member of the AP Moller-Maersk board since 1991 and is currently vice-chairman.

During 2019, she stepped down as chair of Maersk Broker after nine years. However, Ms Uggla and her two sisters remain the sole shareholders of one of the world’s premier shipbrokers.

Meanwhile, her son, Robert Maersk Uggla, is chief executive of AP Moller Holding, the investment arm of the AP Moller foundation, which controls 51.4% of the voting shares of container shipping, ports and logistics giant AP Moller-Maersk.

ALEXA Aponte Vago is a member of one of the most powerful families in shipping.

The daughter of Gianluigi Aponte, who founded Mediterranean Shipping Co, Ms Aponte Vago is chief financial officer of the group that operates one of the world’s largest containership fleets, as well as owning a leading cruise line.

Her father, who will turn 80 next year, remains actively involved in the business as group chairman, while her brother Diego is group president.

However, top management is in the process of being restructured, with former Maersk chief commercial officer Søren Toft due to take over as chief executive of MSC’s container shipping and logistics activities.

The family-controlled group has recognised the need to bring in some outside resources as it continues to expand its cruise and cargo operations.

CECILIA Eckelmann-Battistello has been a trailblazer for nearly half a century.

The president of terminal operator Contship Italia remains one of the best-known women in shipping. She has a shown it is possible to reach the top from a fairly lowly start, in her case completing a secretarial course before joining the shipping industry in 1973.

In the intervening period, Ms Eckelmann-Battistello has witnessed massive change through waves of consolidation and constant financial pressures.

Neither have industry conditions become any easier, with Ms Eckelmann-Battistello having to take the tough decision in 2019 to sell Contship Italia’s stake in the transhipment hub at Gioia Tauro, and then close its Cagliari facility in Sardinia as volumes shrank.

However, none of this has persuaded Ms Eckelmann-Battistello to retire. Work, she says, is her passion. “What do I do?” she asks. “Start doing the housework? No, thank you very much.”

WHEN Ince partner Rita Al Semaani Jansen was awarded the Lloyd’s List Lifetime Achievement Award in Dubai earlier this year, she spoke of her determination to succeed in a male-dominated industry.

She won the award in part for her career-long commitment to mentoring, inspiring and encouraging other women in the industry, which has made a lasting impression on so many professionals in Dubai, through the UAE and GCC, and even further afield.

Based in Dubai since 1992, she has an unequalled depth of knowledge in the laws of the UAE and is fluent in both Arabic and English.

Her experience in corporate and commercial transactions, ranging from mergers and acquisitions, restructuring, joint ventures, employment, start-ups and a wide range of commercial agreements for clients in various industries make her one of the most influential legal figures in the region.

ONE year into her post as Cyprus’s Shipping Deputy Minister, Natasa Pilides is co-ordinating growth in the maritime community to great effect.

Ms Pilides was appointed to her position in March 2018 following several years of calls from the shipping community in Cyprus for a stronger presence in government than one of many elements in the Ministry of Transport, Communications and Public Works.

At the time, she wanted to diversify the maritime cluster beyond the trusted stalwarts of shipmanagement and the ship registry, one of Europe’s largest by tonnage.

Ms Pilides has been omnipresent at industry conferences and exhibitions this year because, in her words, “we need to be present in the conversation. People must feel we’re on the map; we should have an opinion”.

Her influence is on the rise as a result and Cyprus seems well positioned to benefit.

THE leadership shown by Kathy Metcalf, president and chief executive of the Chamber of Shipping of America, in the North American maritime sector was recognised this year in the form of a Lifetime Achievement Award at the Lloyd’s List awards.

After serving the chamber for almost 20 years as director of maritime affairs, Ms Metcalf was appointed chief executive in 2015 and her influence is well understood by the entire sector.

The CSA represents maritime interests before Congress, federal and state agencies and in international fora, but her influence extends well beyond such formal institutions.

When handing over the Lifetime award in Houston this year, Lloyd’s List chief correspondent Richard Clayton applauded her passion for the industry, her commitment and her humility.

In her acceptance speech — coming just a day before the IMO’s World Maritime Day, with its focus on “empowering women in the maritime community” — Ms Metcalf said she believed her “stubbornness” was an important part of her character.

ITOPF is likely the biggest shipowners’ association you have never heard of. Yet the not-for-profit technical body helps deal with the clean-up of oil pollution at sea.

Working tirelessly at the helm of this invaluable force for scientific good is ITOPF’s managing director Karen Purnell, who, among many other influential industry roles, is a leading member of the Lloyd’s List Editorial Board.

Dr Purnell is a Fellow of the Royal Society of Chemistry, with a PhD in chemical physics. During her career with ITOPF, she has been involved in countless major oil spill incidents globally and has contributed to several environmental damage assessment processes.

Prominent among her achievements is the expansion of ITOPF's capability to respond to spills of hazardous and noxious substances.

UNNI Einemo joined the secretariat of the International Bunker Industry Association in April 2016, having worked for nearly two decades as a journalist and analyst specialising in the marine fuel and shipping industries.

As the voice of the global bunker industry, with a remit to represent all stakeholders across the industry value chain, the IBIA director has found herself this year as the de facto spokesperson for all things related to the 2020 sulphur cap.

Given the lingering industry concerns regarding fuel quality, availability and enforcement, her uniquely insightful guidance at the helm of IBIA has never been more necessary.