Mr De Stoop leads one of the largest crude oil tanker companies in the world. Over the past couple of years, Euronav has positioned itself as an environmentally conscious company that wants to help the wider industry combat its emissions. Mr De Stoop talks to Lloyd's List about what the future has in store and what the company learned in preparing for the global sulphur cap 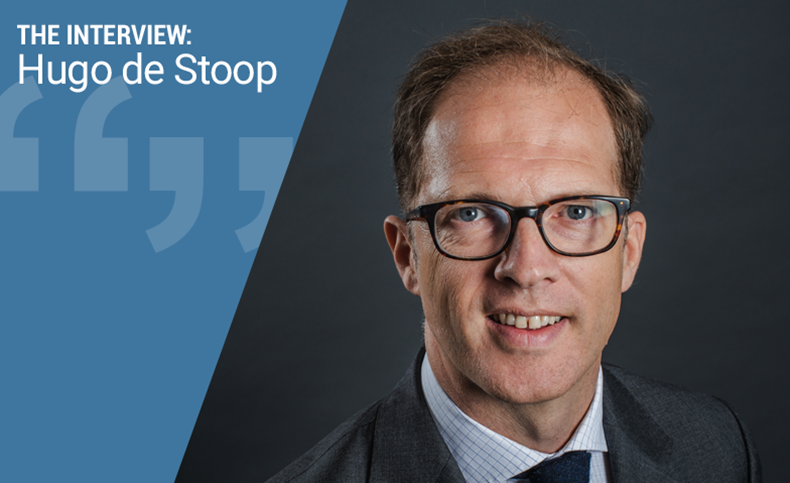 Mr De Stoop leads one of the largest crude oil tanker companies in the world. Over the past couple of years, Euronav has positioned itself as an environmentally conscious company that wants to help the wider industry combat its emissions. Mr De Stoop talks to Lloyd’s List about what the future has in store and what the company learned in preparing for the global sulphur cap

HOW does a company that is among the most publicly committed to contributing to shipping’s decarbonisation reconcile with the fact that its fortune ostensibly depends on the popularity of a fossil fuel?

Euronav is one of the largest transporters of crude oil in the world, boasting a fleet of more than 70 tankers.

It is also among the leading partners of the Global Maritime Forum and of the Getting to Zero Coalition, launched earlier this year with the goal of developing commercially viable zero carbon vessels by 2030.

“We want to show we are a good citizen in this world,” Euronav chief executive Hugo De Stoop tells Lloyd’s List during a recent interview.

On first sight, the effort, however, may appear to be counter intuitive; the quicker the world gets to a point where it no longer needs fossil fuels, the quicker companies like Euronav will lose the very nature of their business, the argument goes.

“My answer to that is that it’s going to happen with or without Euronav. It is not [that] because Euronav is not a part of this coalition, it will not happen. Quite frankly, it would be naive to think that,” Mr De Stoop says.

“I always prefer to be part of the coalition.”

Although known for moving oil, Mr De Stoop sees the company first and foremost as a shipping business.

The image of millions of gallons of water shipped on board a very large crude carrier may seem strange, but it is not a new suggestion. Mr De Stoop believes there will be huge problems concerning water globally in the future.

The head of the US marine solutions, energy and logistics company Crowley Maritime says it shines most brightly when there’s a big challenge, whether it be an earthquake, a hurricane or a huge salvage job such as the Costa Concordia.  Such challenges, he says, bring everyone together, creating a very resilient and capable organisation

This would not be uncharted territory for Euronav. Mr De Stoop explains that since 2008 it has had, on two separate occasions, contracts to store water on one of its two ultra large crude carriers.

“And no-one knew about it...You are just deploying assets that are making you money,” he says.

Tanker owners these days are often looking to expand into other sectors, particularly liquefied natural gas because the commodity is poised for a strong future and new export facilities are set to become operational over the next few years.

Euronav will not be taking the same approach any time soon.

Investors love pure players, Mr De Stoop believes, and Euronav’s shares would fare very badly if it were to diversify into gas carriers.

“Investors have the right and the opportunity to invest in that sector, they should not be forced to. Euronav will continue to be a pure player,” he insisted.

Changing the product from oil to water, in Mr De Stoop’s view, is a simpler transition.

“The difference is going to be I am not going to buy or build an asset completely different from the one we operate and therefore force investors to go in that direction,” he says.

Although there is intense pressure on global industries and economies to decarbonise and divest from fossil fuels, demand for oil is not slowing down.

“Peak oil and, more importantly, the sharp decline of the transport of crude oil is probably not in our sight,” Mr De Stoop says.

Indeed, projections from the International Energy Association suggest that oil demand will plateau after 2030.

Others see a more immediate climax for black gold. DNV GL forecast earlier this year that peak oil demand will happen in the mid-2020s, followed by a rapid decline in the 2030s.

Mr De Stoop said even if peak oil demand arrived in 2023, the decline would not be sharp and, combined with decline in the supply of new tankers the industry is currently witnessing, the sector is well prepared for this scenario.

“We should not be afraid of peak oil, no matter when it happens,” he says.

The Getting to Zero Coalition is still very much in its early stages, still growing in membership and without a fixed agenda at the moment.

Mr De Stoop said the coalition will have its first meeting this December at which the stakeholders will decide which working groups they will be a part of.

He is eager for Euronav to be in the working group that considers carbon capture storage as a tool to cut down emissions.

“A lot of people are convinced it will be part of the solution,” he says.

Whatever the technologies, bringing about zero emission vessels will require considerable funding and the industry knows this.

Mr De Stoop deems that a carbon levy on shipping emissions could be “interesting” because it offers a direct opportunity to the industry to finance its research and development, while being less dependent on government spending.

Lloyd’s List reported earlier this year that some of the biggest industry organisations are designing a proposal for a research and development fund based on a mandatory $2 fuel levy.

“I also believe public companies have potentially more responsibility than private companies. And that is what our investors are asking,” he says.

Attention to environmental, social and governance factors is no secret. Neither is the importance investors attribute to regulatory compliance.

Euronav has garnered arguably unique interest regarding its pronounced approach to the 2020 sulphur cap, for which it will rely exclusively on compliant fuels because it has not installed any scrubbers on its tankers.

Mr De Stoop has been vocal about sulphur cap preparations, hosting a special presentation in September that disclosed the firm’s strategy of procuring, storing and bunkering its own fuels.

It bought 420,000 tonnes of compliant-fuel oil and marine gasoil earlier in September to power its fleet, and stored it on one of its ultra large crude carriers.

The company has established Malaysia’s Linggi Port as it supply base for very-low sulphur fuel oil. About 70% of Euronav vessels pass through that destination, according to Mr De Stoop.

He says the company is “definitely thinking” about replicating the Malaysia deal. But before doing that, he wants to ensure all the bunkering operations, as well as the transition for the vessels using the new fuels, go smoothly.

Every one-foot reduction in draft is equivalent to about 350 loaded containers. That means boxships sailing from Asia to the US east coast via the Panama Canal will have to carry less cargo than normal in order to transit the waterway during times of drought, with Dr Vásquez now fast-tracking research into possible solutions after one of the driest years...

The lessons Euronav has learned are many and difficult.

Some fuels are less stable than others and require continuous movement, Mr De Stoop says. The firm has implemented a cargo care programme.

“It is a strict way of looking at evolution of fuel, the way it ages, and making sure there is no stratification,” he says.

With the product they have brought, a key focus was to ensure blended fuels do not separate.

However, Euronav also learned about the significance of temperature and, perhaps most importantly, fuel contamination.

Simply relying on lab analysis from refiners may not be enough to guarantee that the fuel meets the 0.5% limit and is not contaminated; you need to make sure samples are taken at the very last point before it goes on the vessel.

All these insights along with a considerable stockpile of fuel waiting to be consumed make Mr De Stoop pretty emphatic about the company’s preparedness for the global sulphur cap.

Euronav is no doubt a big company, but it also has big competitors.

Apart from its size, the firm’s recent history has helped generate intrigue and anticipation.

Mr De Stoop’s predecessor Paddy Rodgers was an outspoken critic of scrubbers, decrying their potential environmental impact and fearing them to be sunken costs, while some other very large crude carrier owners have decided to spend on the abatement technology.

Since then, Mr De Stoop has decided that Euronav will take a wait-and-see approach to the matter.

“I think people don’t really understand our strategy and it is a pity. Our strategy is very safe,” he says.

Euronav has what Mr De Stoop calls the luxury of time; with the price spread between high sulphur fuel oil and VLSFO still unknown, the company can sit back, observe and wait for the fuel market to evolve while using its VLSFO stockpile.