As part of our 2019 Top 100 most influential people in shipping series, we look at the very best legal minds across maritime law, including arbitration, major and/or novel transactions, and M&As 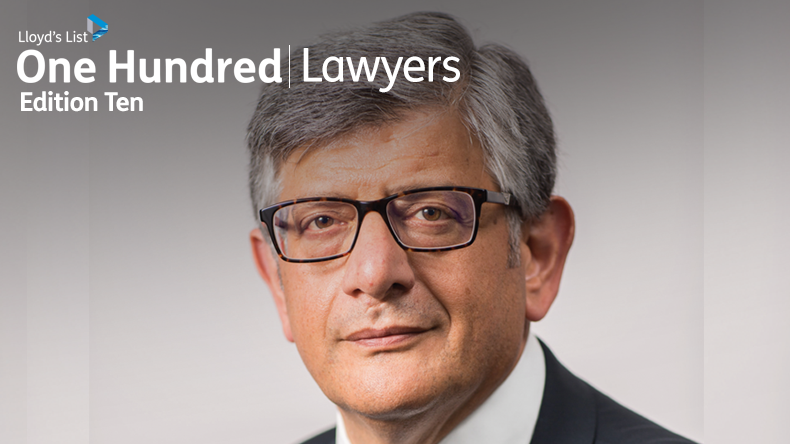 Theochari: Frequently goes in to bat for the industry with leading politicians.

HARRY Theochari is one of the masterminds of Norton Rose Fulbright’s ascent from a London-based shipping specialist into a serious contender among the ranks of global corporate law firms.

Over the past 12 months, global head of transport Mr Theochari and his team have been particularly busy, completing the massive Danaos Corp restructuring and handling Toisa Chapter 11 administration in the US.

We are told that, at the time of writing, he was about to close the sale of a major shipping portfolio by a maritime bank to private equity interests.

Mr Theochari frequently goes in to bat for the industry with leading politicians, working with both Tory shipping minister Nusrat Ghani and Labour shadow transport secretary Andy McDonald, to ensure its concerns do not go unheard.

VINCENT Power will be fighting shipping’s corner in Brussels this year in his new role as chairman at the European Maritime Law Organisation, where the industry’s established practices are frequently questioned by competition authorities.

In play in particular will be the European Union’s Consortia Block Exemption, which sets the rules for alliances between container lines, and which comes up for renewal next year.

However, Dr Power — a partner at Irish law firm A&L Goodbody, where he specialises in competition and procurement — has stated his plans to broaden Emlo’s remit into other areas of maritime law.

He is also the author of seven books on maritime law, with the third edition of the 1,800-page, two-volume tome EU Shipping Law, originally published by Lloyd’s of London Press, published in 2019 by Informa Law from Routledge and hosted on the i-law.com platform.

QUADRANT barrister Simon Rainey QC earns his place after acting in some of the landmark shipping cases heard in London over the past year, most notably for the appellants in Ark v Silverburn.

In this case, the Court of Appeal overturned an earlier High Court ruling to establish there is no absolute obligation to maintain class under a bareboat charter, a decision with obvious implications for users of Barecon 89.

Mr Rainey regularly tops the list in legal trade directories such as Chambers and the Legal 500, making him one of Britain’s most prominent shipping-specialist silks.

ALLEN & Gledhill partner and maritime and aviation practice co-head Gina Lee-Wan is well known and respected in the maritime community. Her practice involves contentious and non-contentious shipping and offshore matters.

Ms Lee-Wan’s clients include all of Singapore’s major banks, as well as other lenders and shipowners.

Consistently ranked in the top tier of leading individuals in shipping by Chambers Global, Chambers Asia-Pacific and The Legal 500 Asia-Pacific, Ms Lee-Wan is inevitably involved in the majority of ship finance transactions in Singapore.

RENOS was one of the biggest shipping judgments of 2019, with the UK Supreme Court ruling that constructive total loss calculations should include all reasonable costs of salving and safeguarding a vessel from the time of a casualty onwards, but exclude special compensation to salvors.

Both legal teams acquitted themselves well in arguing for their clients in what was inevitably a complex judgment.

However, Steven Berry QC of Essex Court has acted for the respondents throughout, from first instance and the Court of Appeal all the way to the top, and ultimately proved his main contention.

PAUL Dean worked his way up from articles in 1988 to his current job as head of shipping at the law firm that claims to have more shipping partners than any other, with more than 200 dedicated practitioners.

HFW (the new branding for Holman Fenwick Willan) is expansion-minded, he said in an interview with Lloyd’s List earlier this year and has recently taken over the old Ince & Co operation in Monaco, lock stock and barrel.

In particular, Mr Dean is looking to expand HFW’s presence in the China market, where it already has a foothold in Shanghai. Beijing, Shenzhen and Guangzhou.

INCE’S Rita Al Semaani Jansen is this year’s winner of the Lloyd’s List Lifetime Achievement Award at the Lloyd’s List South Asia, Middle East and Africa region, in recognition of her groundbreaking work in empowering women in the maritime industry the Middle East.

Ms Jansen, a partner at Ince, has been with her employer since it set up in Dubai in 2006, after previously working as a senior lawyer at Denton Wilde Sapte, Berrymans Lace Mawer and Wellington Capital.

Based in Dubai since 1992, she has an unequalled depth of knowledge in the laws of the United Arab Emirates and is fluent in both Arabic and English.

She is also an active member of the Dubai Business Women’s Council, using her position to push for greater balance in the legal industry, and is also prominent in Ince’s mentorship scheme, helping to support women in their professional development.

LINDSEY Keeble heads the global maritime group at WFW, specialising in structured finance and leasing, especially those with export credit agency involvement, for a wide range of maritime, offshore and port infrastructure assets.

She is especially well regarded for her LNG and cruise expertise. Ms Keeble added important legal input to the Poseidon Principles, the new set of environmentally-based lending criteria adopted by many major shipping banks this year.

Mr Liu also helped Hill Dickinson become the first law firm in Hong Kong to successfully obtain an order from a mainland Chinese court for interim measures in aid of an arbitration administered by the Hong Kong International Arbitration Centre, immediately seizing on a new mainland-Hong Kong arrangement concerning mutual assistance in interim measures for arbitration proceedings that came into effect on October 1.

His main area of practice is in commercial and shipping litigation and arbitration. He also has extensive experience in handling international commercial disputes, especially those connected with projects on China’s Belt and Road Initiative.

He was among the Top 100 Most Influential People in Chinese Shipping Industry 2018, the youngest on the list and one of only 12 from Hong Kong. Mr Liu was also selected on the Lloyd’s Top 5 Next Generation in Shipping list in 2017.

CHRISTOPHER Nolan is a litigator and co-chair of Holland & Knight’s transportation and infrastructure group, based in New York.

He concentrates on shipping, focusing mainly on dispute resolution arising from charterparties, bills of lading, fire and explosion, total loss, limitation and insolvency.

Consistently ranked among the best shipping lawyers in the US by the Chambers directory, he also acts as National Counsel for a major ocean carrier.

The Top 10 maritime lawyers list is compiled by the Lloyd’s List editorial team in conjunction with our colleagues at Lloyd’s Law Reports.

*Our colleagues at Lloyd’s Law Reports can benchmark activity and results in shipping litigation and are finalising data for the 2019 legal year; contact yvonne.knock@informa.com to inquire