Lei Fanpei has now been appointed to lead the country's largest shipbuilding group, with the merger between CSSC and CSIC turning it into a business behemoth with total assets worth Yuan790bn ($112.5bn) and 310,000 employees

Amid a market recession, the 56-year-old ex-aerospace expert must demonstrate he can handle ships to the same standard he handled rockets 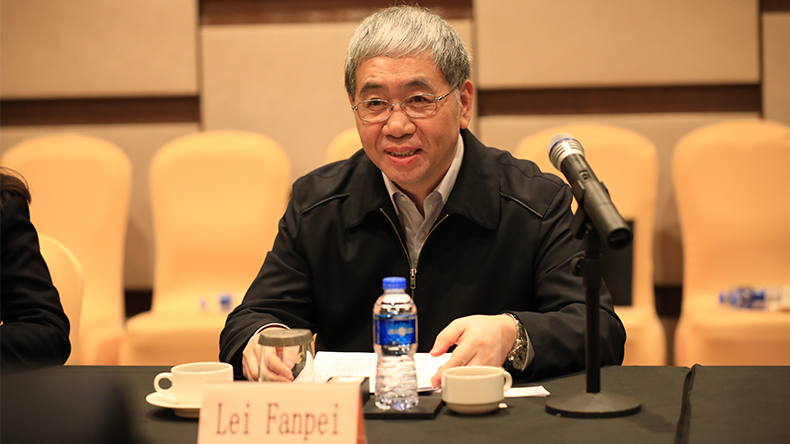 Lei: taking the helm of China’s number one shipbuilding group.

LEI Fanpei has descended from the sky to the shore.

The 56-year-old, a rocket engine major at China’s Northwestern Polytechnical University, had spent a 30-year career in China’s aerospace industry before moving into the less-fancy vessel construction sector in March last year.

Now the government has decided to let him take the helm of China’s number one shipbuilding group, which can match the clout of its South Korean rivals.

The creation of the China State Shipbuilding Corp — which was formally approved in October — results in a reincarnation of the brand name of one of the predecessor firms known as CSSC, although their Chinese names were slightly different.

The other one to be incorporated into the larger group is the China Shipbuilding Industry Corp.

Excluding naval ships, their combined vessel orderbook stood at about 8.8m cgt as of end-September, exceeding that of Samsung Heavy Industries and only trailing the world’s largest player, Hyundai Heavy Industries, based on Clarksons' estimates.

The latest $4bn worth of new vessel orders, unveiled during the China Marintec event and supported by Chinese leasing funds, will give a further boost to the backlog.

However, it is not just about the size, which it is relatively easy to build with power from the state. Building strength is what Mr Lei needs to focus on.

That includes ways to improve corporate management, operational efficiency and product innovations, especially at a time when the shipbuilding markets are in the doldrums.

The ability to construct more high-value-added vessels, such as liquefied natural carriers, is among the goals that the merged company aims to achieve.

As of October 1, the ratio of the number of LNG carriers on order at yards between South Korea, China and Japan is 103:26:3.

Will the new group be able take advantage of the merger to snatch part of Qatar Petroleum’s touted newbuilding project of 40-60 LNG carriers?

In addition, eyes are also on some of the Chinese shipbuilder’s pioneering products, including CMA CMG’s 23,000 teu LNG-fuelled containerships and Carnival’s Vista-class cruiseships.

A successful delivery of these vessels will earn CSSC a good reputation and more business opportunities. A failure will lead to heavy losses.

Streamlining management and operations is also no easy task. Co-ordinating a dozen subsidiary yards that are now still competing with each other is as challenging as reducing the excess shipbuilding capacity and workforce.

There are also massive restructurings that need to be done for various listed arms to brush up their market value.

The new CSSC chairman must demonstrate he can handle ships in the same way he handled rockets.