While regulation has always been a fundamental pillar in maritime, the people that decide, shape and enforce regulations today can determine the fortunes or miseries of the industry. Decarbonisation and sanctions in particular exemplified this point in 2019. There is little evidence 2020 will be much different

Year after year, regulation is becoming an increasingly more important part of this industry. These are the 10 most significant actors in regulation that affect shipping 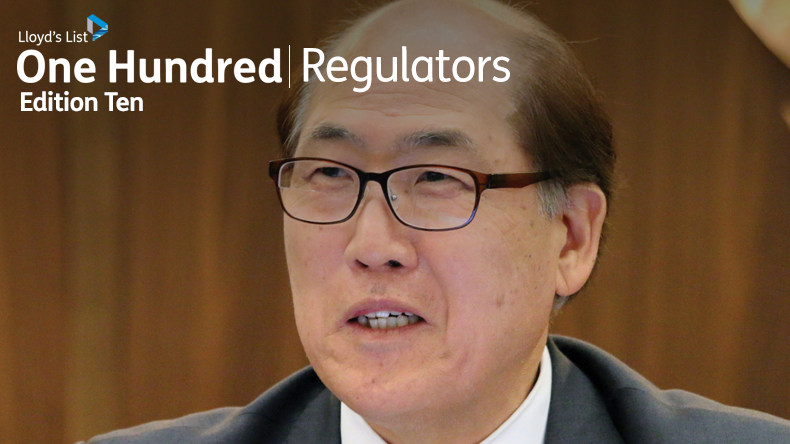 Lim: Next four-year term could be even more consequential.

FOR what could be thought of as a transitional year — after a hectic 2018 and ahead of a crucial 2020 — the IMO was nonetheless still, by some margin, the most influential in maritime regulation, dominating both safety and environmental policy.

In 2019, it finalised preparations for the 2020 global sulphur cap and moved on with applying its initial greenhouse gas strategy.

This still requires significant work but has already had a clear impact, with business taking it as a sign shipping is on an irreversible decarbonisation footing.

Next year will be a moment of truth for the IMO as it deals with the implementation of the 0.5% sulphur limit and tries to bring in a new short-term measure to reduce GHG emissions.

Kitack Lim was reappointed as secretary-general to run the IMO for another four years, which could be even more consequential than his fourth year.

IF environmental regulation is what will define shipping’s future, sanctions are perhaps the biggest challenge today.

The intensification of US sanctions surrounding Iran and Venezuela has shaken up the industry this year, with far-reaching effects.

Aside from having market impacts — like the sanctioning of Cosco tanker units, which sent tanker rates soaring — OFAC has put pressure on the marine insurance industries and flag states to comply with US sanctions, adding a greater degree of scrutiny.

This year was proof of just how much international disputes — both physical and financial — and willingness from the world's largest economy to enforce penalties can affect global shipping.

THE new European Commission president Ursula von der Leyen could turn out to be one of the most important actors in maritime in 2020.

She has explicitly tasked her Commissioners to work on including shipping within the EU Emissions Trading System, a move that would effectively regulate greenhouse gas emissions of vessels using EU ports.

Shipowners globally detest the move — as does the IMO — but the political momentum behind it and its place within a broader decarbonisation agenda means reversing course may be difficult.

Ms von der Leyen’s decisions and speed on regulating shipping emissions next year could define every aspect of the future of this industry for years to come.

THE head of the world’s largest shipowning lobby, Esben Poulsson, had another busy year as regulatory demands on owners continue to grow.

The organisation has helped prepare the industry for the 2020 sulphur cap and will be expected to take a lead in improving it during its first implementation year, based on early experiences.

In 2020, the ICS will be significant in the development and approval of short-term decarbonisation measures from the IMO.

Chairman Mr Poulsson and his secretariat will also have to contend with the new European Commission and its goal to regulate shipping emissions, a move the ICS highly opposes.

OFFERING the most diverse services among industry groups, BIMCO continues to be a leading voice for businesses collectively speaking to regulators.

Its work covers all regulatory aspects and, with a firm proposal on reducing emission though engine power cuts, it has already put its stamp on next year’s GHG debate.

The 0.5% sulphur cap, though going fully ahead, is an operational and financial challenge that will generate new insights. It will be upon groups like BIMCO to translate those into action.

2020 could be transformative for BIMCO, where Sadan Kaptanoglu is president, as it will be the last year with Angus Frew as secretary-general. He has been in this role since 2013.

THE significance of environmental policy in shipping today means that those influencing regulation are not always a singular or structured body.

Civic society, activists and politicians with a broader environmental agenda all scrutinise and weigh on regulators as they attempt to deliver policies that can reconcile these concerns with technical feasibility and commercial interests.

Organisations such as the Clean Shipping Coalition, Transport & Environment and the International Clean Council on Transport are among those pressuring the industry to act faster on emissions than others are willing or claim to be able to.

Groups such as Extinction Rebellion targeting IMO meetings are raising the profile and showcasing just how visible shipping regulation has become. That is unlikely to change any time soon.

THE leading dry cargo association emerged in 2019 as one of the few leading groups that still publicly criticises the shortcomings of the 2020 sulphur cap and the threats it presents, particularly for tramp shipping.

While the cap is coming, Intercargo is one of those groups we expect to provide evidence and data of what implementation has looked like for these trades in 2020 and beyond.

Depending on what they find, it could have an impact on the regulation in the future.

Intercargo, led by chairman Dimitris Fafalios, is also vocal on safety issues, especially the perils of liquefaction, which continue to claim seafarers' lives.

TANKER shipping has been a target this year, whether it be through financial sanctions or due to geopolitical tensions that lead to vessel harassment and seizures.

Under chairman Paolo d'Amico, Intertanko tries — as much as is possible in this context — to protect this sector and speak for its interests.

The group must also juggle this with being the leading tanker voice in the IMO.

During the past year, Intertanko played a key role in shaping the new energy efficiency targets for tanker newbuildings.

As the IMO attempts to craft new greenhouse gas-reducing measures, the group will seek to have just as strong an impact there.

THE IACS remains the industry’s designated technical expert. Its voice is one of the most influential in terms of guidance.

Next year, the IACS could have an even bigger role as its members help implement the 2020 sulphur cap while the IMO works on addressing some of the outstanding concerns around compliant fuel safety and availability.

Beyond that, however, the industry will likely expect the organisation to make greater interventions as technologies and intended solutions for vessel decarbonisation come to be promoted.

Chairman Arun Sharma’s plan to focus on data-driven policy could also have significant impacts in the realm of policy-making.

ONE of the key goals of the IMO's initial greenhouse gas strategy was to spur business into action.

Perhaps the grandest manifestation of that is the Global Maritime Forum, shipping's non-governmental organisation that is vying for a concerted industry approach to major challenges and trends such as decarbonisation.

Under chairman Peter Stokes, the GMF has already had a clear impact in 2019; it led to the birth of the Poseidon Principles that tie climate change considerations to future lending policies.

It is also one of the founding members of the Getting to Zero Coalition, which brings together dozens of companies, non-governmental organisations and institutions with the aim of developing commercially viable zero-carbon vessels by 2030.

Pressure and appetite for a decarbonised shipping means the GMF is likely to increase in significance over the coming years.

A 0.1% sulphur cap in the Mediterranean Sea is coming closer