The head of the US marine solutions, energy and logistics company Crowley Maritime says it shines most brightly when there’s a big challenge, whether it be an earthquake, a hurricane or a huge salvage job such as the Costa Concordia.  Such challenges, he says, bring everyone together, creating a very resilient and capable organisation 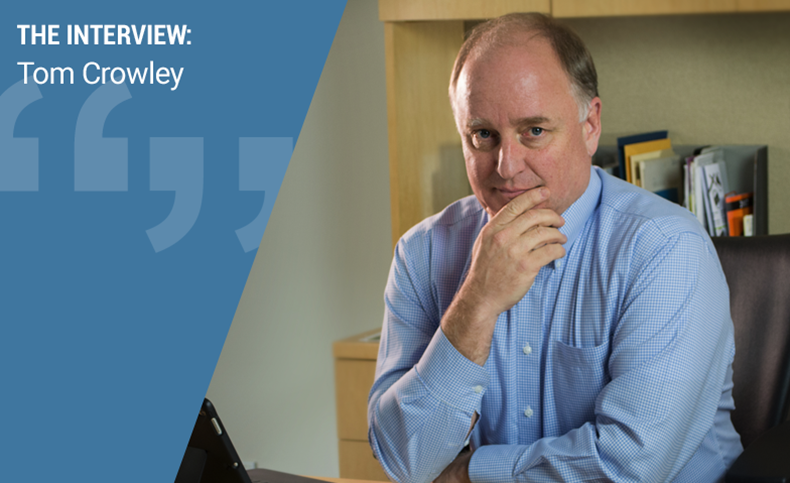 The head of the US marine solutions, energy and logistics company Crowley Maritime says it shines most brightly when there’s a big challenge, whether it be an earthquake, a hurricane or a huge salvage job such as the Costa Concordia. Such challenges, he says, bring everyone together, creating a very resilient and capable organisation

CROWLEY Maritime Corporation was born from a single rowing boat plying the waters of San Francisco Bay more than 127 years ago. That was the initial investment of Thomas Crowley and, along with his own labour as oarsman, it represented the start of what has come to be one of the more remarkable firms in the US today.

Over the past century and a quarter, Crowley Maritime Corporation has moved well beyond that single rowing boat to become known as a marine solutions, energy and logistics company that provides services in domestic and international markets through four business units: Crowley Shipping, Crowley Fuels, Crowley Logistics and Crowley Solutions.

But while the company has grown and diversified over the years, some things haven’t changed. As chairman and chief executive Tom Crowley sees it, “we are still privately held, strive to be a leader in our markets, provide world-class services to our customers and sustain and grow the company by reinvesting profits back into the business”.

Born in San Francisco and educated in Seattle, Washington, Mr Crowley is the third generation of his family to run the business, taking over in 1994 on the passing of his father Thomas B Crowley, Sr. It was a role that came suddenly, but one his father had prepared him for from a very early age and in “a fun way”.

“He was 53 when I was born. So, I would say the first half of his life was really focused on the business, but by the time I came along, he was really a very devoted family man. But instead of going out and playing baseball on the weekends, he would take me down to the shipyard,” Mr Crowley says.

Every one-foot reduction in draft is equivalent to about 350 loaded containers. That means boxships sailing from Asia to the US east coast via the Panama Canal will have to carry less cargo than normal in order to transit the waterway during times of drought, with Dr Vásquez now fast-tracking research into possible solutions after one of the driest years...

That early training gave Mr Crowley “a very tight connection” with the company and insight into “what the company was all about”.

The training also saw him selling tickets for the firm’s Red and White Fleet, a sightseeing and charter tour company, as well as working with mechanics and deckhands. Not least, he eventually discovered that he was “one of the few deckhands that knew how to splice a line”.

But Mr Crowley also learned that he was on a fast-paced training programme: “about the time I ever figured a job out, they would move me on to something else”.

Looking back, he sees it as “incredible experience for somebody my age, but, but also I think served me really well to kind of learn the business from the bottom up”. The experience stood him very well indeed since, with the sudden passing of his father in 1994, Mr Crowley “ascended to a leadership position much more quickly than I thought I was going to”.

Mr Crowley is proud of the company he leads, saying that it shines most brightly when there’s “a big challenge”, whether it be an earthquake, a hurricane or a huge salvage job such as the Costa Concordia. Such challenges, he says, bring everyone together, creating “a very resilient and capable organisation”.

The resiliency of Crowley Maritime Corporation was recognised by the US Transportation Command, which last year awarded the firm a $2.3bn contract to manage Defense Freight Transportation Services. The contract calls for Crowley to move various types of cargo from thousands of suppliers through 41 major depots around the continental US, including Alaska, and in Canada.

In June, Crowley successfully executed its first cargo move under the new DFTS contract. Mr Crowley said that, “the initial DFTS move is a culmination of years of careful and strategic preparation combined with a lot of diligent work on the part of our logistics team and technology partner 3Gtms”.

According to Mr Crowley, his firm is now managing “1,600 orders a day for transportation requirements throughout North America and we’re doing that with a 98.5% on time performance”. He says it is “amazing” also because the work is being done with 45% small businesses — minority-owned businesses and veteran-owned businesses — supporting the effort.

“We’ve saved the Department of Defense money in terms of the way in which we move the freight and we’ve done it in a way that has far exceeded their expectations in terms of performance and utilising small business,” he says.

Coming ahead of IMO 2020, Mr Crowley sees the move into LNG-powered vessels as part of the company’s long-term concern over environmental issues. “From an innovation point of view, environmental issues for us have always been very important and based in the places that we operate and how we operate.”

He says it was “very clear to us” that an LNG-powered ship “made a lot of sense” with regard to the firm’s connection with Puerto Rico. “It’s a closed loop and it enabled us to make that investment,” he says. Underlining the “closed loop”, a new shoreside LNG fuel depot is being completed at the firm’s base in the port of Jacksonville that will provide dependable supplies of LNG for the vessels.

“From an environmental standpoint, it was the right choice for us,” Mr Crowley says. But he notes that other carriers might have greater difficulty in arriving at the same solution as their vessels “are moving around longer distances into different ports. So it’s harder to make that investment globally”.

None the less, he believes the industry is “definitely moving” in the direction of LNG, although it’s going to “take time and investment in the infrastructure to be able to move natural gas”.

Crowley Maritime Corporation has long conducted business with Latin America, El Salvador in particular. But while the firm has built an “amazing supply chain” throughout Central America, Mr Crowley also says “we’ve moved a lot of jobs to El Salvador”. Indeed, he says, that “probably a third” of the company’s administrative work is now being done there.

For Mr Crowley, El Salvador has been “an amazing resource” for the firm, but also “very rewarding” because “we’re putting good paying jobs in that region that we’re also serving as a transportation provider”.

After three years at helm, the chairman of Taiwan-based Yang Ming has put the idea of ordering super-sized boxships on the back burner, with The Alliance to welcome a new member next year. His optimism about the market prospects is laced with caution and he believes the company’s investment in scrubbers will pay off. For all those wondering, Yang Ming...

The way he sees it, Crowley Maritime is helping to provide that experience where the workers have a connection to an American company, but are “putting their own mark on it" and showing "incredible pride in what they're accomplishing”.

The venture in El Salvador represents a foray into diversity and inclusiveness, subjects of considerable interest to Mr Crowley.

“The question of how to create a more diverse organisation is not about ‘the D’. It's about ‘the I’. It's about the inclusion. And what’s also interesting is inclusion really covers the broad spectrum of every employee,” he says.

“If your team does not feel like they're being included in and being heard and being a part of what’s going on in their job day to day, they’re not going to be engaged. And it’s so important if you want to create a diverse team, everyone has to feel part of that inclusion.”

Crowley Maritime Corporation has come a long way from one man in a boat.