Singapore’s PSA International claims the crown of ‘Top of the ops’ in the container port sector in this year’s rankings, heading up an Asian top three on an equity teu basis

As part of our annual Lloyd’s List Top 100 most influential people in shipping, being published on December 13, we assess the movers and shakers in the container port sector 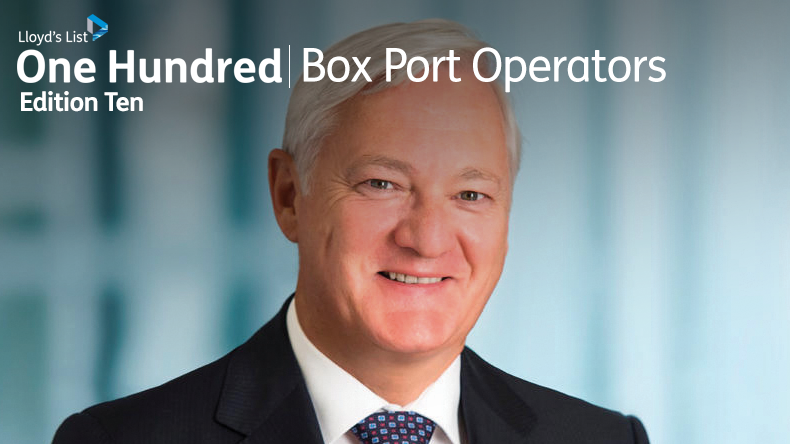 HAVING held reign over PSA International for more than a decade, Fock Siew Wah retired in mid-2019 to make way for his deputy Peter Voser as chairman of the Singaporean operator.

The former chief executive of Royal Dutch Shell has big shoes to fill. Mr Siew Wah has led the group from being a regional to a truly global player.

The PSA Group’s global footprint has grown to its current-day span of more than 50 coastal, inland and rail terminals in 17 countries, and volumes have doubled to more than 80m teu annually from the beginning of his stewardship.

As part of our annual Lloyd's List Top 100 most influential people in shipping series, we look at the major box port operators with Cosco, DP World and PSA all making their mark

On an equity basis, the group handled more than 60m teu in 2018, according to data compiled by Drewry.

Mr Voser has been charged with providing a sustainable growth trajectory for the group while helping it develop in the supply chain space.

Pivotal to this role will be digital products that PSA will champion through its venture capital arm unboxed. The facility was established to partner alongside third-party vendors from everything from 3D printing to blockchain.

However, PSA’s speciality is ports. The group’s expansion from its bread-and-butter activity shows little sign of slowing down.

The latest venture is in Gdansk, Poland, where it recently revealed plans to bring its development in line with the long-established ports in Europe’s northern range.

This seems a daunting task, but one thing PSA can never be accused of is lacking ambition. It is not in its nature.

During his tenure, the group managing director has witnessed it all. From the box port boom years through a global financial crisis and beyond, to the era of the ultra large containership, which has seen ports evolve as rapidly as the vessels they serve.

HPH is the original global port operator, paving the way for others to branch out from their regional roots. Its first international foray was at Felixstowe, in the UK, where it remains today. Felixstowe is among more than 50 port terminals flying the HPH flag worldwide.

Expansion may have slowed in recent years but the same could be said of its competitors, reflecting a slower market pace and limited growth opportunities.

However, HPH is expected to be a major benefactor of the ‘One Belt, One Road’ initiative, as it starts to come to fruition in the coming years. More than 30 ports have been earmarked by the group under the China-backed project.

Mr Boming replaces Zhang Wei, who was promoted to senior management of Cosco Shipping the previous month as part of this reshuffle.

Changes at the top come as CS Ports continues its rapid period of growth, both in terms of throughput numbers and affiliated terminals.

Whether the takeover of Noatum Ports, Piraeus, or the creation of a new Abu Dhabi box hub in in the Middle East, CS Ports is steadily expanding its presence, with a significant foothold in nearly all the key markets.

In total teu terms, CS Ports leads the pack, having usurped HPH as the largest port operator in 2018. And it seems only a matter of time before the Chinese group climbs to the top of the rankings on an equity throughput basis, too.

A MESSY terminal dispute in Djibouti made for an eventful 2018 for DP World, which is still wrangling about the matter to this day.

As the Dubai-based operator bids to put this unfortunate event to bed, it has been steadily building its business and putting its self-coined ‘global trade-enabler’ strategy back on track.

The ramp-up of business at new terminal ventures, including in London, has helped soften the blow of a weak domestic performance over the past year, but overall box volumes have remained flat.

However, cash-rich DP World, which boasts a portfolio of nearly 80 marine terminals, continues to expand.

Although the group’s investments have diversified significantly in recent years, including the acquisitions of P&O Ferries, Unifeeder and, more recently, Topaz Energy and Marine, the port business remains its core.

New endeavours include a joint venture in Indonesia, where $1.2bn was put into the county to develop its port and logistics space. This includes a new 3m teu container facility.

ENTERING the third year of his tenure as head honcho of APM Terminals, Morten Engelstoft has overseen the integration of the terminal operator into the Maersk group’s wider transport and logistics division.

While the amalgamation takes priority, new greenfield sites and acquisitions have been put on hold. Instead, the focus has switched to utilising existing facilities, driving traffic from its affiliated carrier Maersk Line and likewise Hamburg Süd, while divesting itself of those deemed to be underperforming.

Zeebrugge has been the most high-profile asset seen as surplus to requirements, while market murmurings suggest the next on the list could be Maasvlakte I, in Rotterdam, with the group’s operations set to be consolidated at the new Maasvlakte II site.

Despite new ventures being put on hold, APM Terminals remain a significant player, with a global network of nearly 80 terminals and more than 100 inland services.

Mr Jingtao is the group’s managing director and is charged with heading up one of the fastest-growing players on the port circuit.

CM Ports has invested in new port projects globally, and is a key protagonist behind China’s One Belt, One Road drive. The group now has nearly 40 terminals globally to its name.

However, its expansion is hindered by the absence of an affiliated carrier, on which many of its competitors can rely for guaranteed volumes. The company does, though, hold a significant stake in Terminal Link, which is majority-owned by French carrier CMA CGM.

In the face of growing economic headwinds, CM Ports is therefore looking to draw equity investment from carriers involved in some new and existing port projects fronted by the Hong Kong-listed operator.

“More and more ports are teaming up with carriers nowadays,” Mr Bai said in late August. “This is perhaps something that we all have to do at the current stage of the industry.”

AMMAR Kanaan is now well into the second year heading up Terminal Investment Ltd as the terminal operator’s chief executive.

He replaced the long-serving Vikram Sharma, who stood down upon his retirement.

Over the course of Mr Sharma’s reign, TIL, the terminal-operating arm of container shipping giant Mediterranean Shipping Co, grew into a fully fledged global operator. TIL was initially established to provide land support to MSC but is now a seriously player in its own right.

Under Mr Kanaan’s stewardship, MSC’s port business has continued to rise to prominence, expanding its reach with some eye-catching ventures. This includes the sign-off for a 30-year concession in Abu Dhabi to turn Khalifa Port into its regional hub.

TIL is also expected to lead the next expansion phase at the Mediterranean’s largest container port Valencia, where it already has a significant presence. The terminal operator was the sole bidder for the project, involving the build of Valencia’s fourth container terminal scheduled to open in 2024.

He was instated by the Spanish-Filipino billionaire as the group’s global corporate head at the start of 2019 to oversee day-to-day operations.

The Manila-based company’s longstanding mantra has been to invest in small to medium-sized established terminals focused predominately on gateway cargoes, where there is the promise of immediate efficiency gains and, in turn, strong cashflow potential.

Forming partnerships with local players has been a prominent feature of ventures past. However, the group has always favoured owning a majority stake in its terminal investments. The only exception is its joint venture with Singaporean operator PSA in the Colombian port of Aguadulce.

While competitors seek to diversify, ICTSI has pledged to stay true to its roots, focusing solely on port operations. With Mr Gonzalez being from a pure port background, he is seen as the ideal man to lead the group forward.

AFTER Evergreen Group's founding chairman Chang Yung-Fa passed away in 2016, Anchor (Cheng-Yung) Chang (not related), chairman of Evergreen Marine, Evergreen Line’s Taipei-listed flagship unit, has been enlisted as the man in charge.

Evergreen’s principal business maybe container shipping, as the seventh-largest global carrier, but its terminal portfolio, too, is impressive.

The group has interests globally, including in the US, most notably Los Angeles at Everport, and Central America, while the majority are located closer to home across Asia.

Unsurprisingly, Evergreen has a strong presence at all of Taiwan’s port majors, including the largest, Kaohsiung.

US port operator SSA Marine is known predominately for its domestic operations, holding a presence at the principal box ports on both the western and eastern seaboards.

Yet despite a significant share of business concentrated in the US, SSA Marine has interests throughout the globe, with quays operating under its name in nearly all continents. Indeed, only Europe is missing from the list.

The Seattle-based company has, though, recently won a tender for a new box facility in Georgia, located at the crossroads of Europe and Asia.

Knud Stubkjær heads up the operational side as the group’s chief executive and is a man familiar in container shipping circles.

Another of the Maersk alumni, he has more than 35 years of experience in the industry, including 30 with the Danish shipping giant, serving — among numerous positions — as head of the Maersk Container Business.