Having brought his shipping company DryShips back from bankruptcy and built a shareholding of about 83%, George Economou bought out the remaining investors for about $75m to take the company private after more than 14 years on Nasdaq 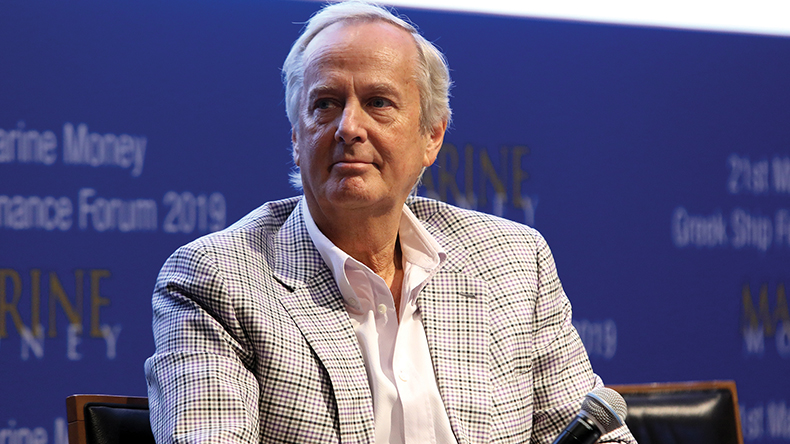 GEORGE Economou is a serious art collector. He recently gifted a monumental Peter Doig painting to the New York Metropolitan Museum of Art for its 150th anniversary and a gallery at London’s Tate Modern bears his name.

Mr Economou extols the need to visit galleries and meet artists to be at the front of the queue when a desirable work becomes available. It’s a competitive world.

Things may not work exactly the same in shipping, but for the past two decades, the hyperactive Greek magnate has been seemingly comfortable in the public eye, his every move watched like few other shipowners on the planet.

Never one to let the grass grow under his feet, Mr Economou likes to be an early mover. Whether it’s acquiring vessels or taking emergency action to redeem an investment caught out by the market, the signature is generally bold and unhesitating.

That was the case two years ago, when his offshore drilling company Ocean Rig was the first to file for bankruptcy protection in the US and to restructure.

This enabled it to emerge in a much fitter shape and, at the end of 2018, conclude a merger with market leader Transocean, leaving Mr Economou with a 2% stake.

Others continue to struggle in a sector that was decimated by a plunge in energy spending when oil prices slumped and which, he believes, still looks “ugly”.

Through force of will and restless financial engineering, Mr Economou also brought his Nasdaq-listed shipping company DryShips back from the brink of bankruptcy but was quick to recognise that it was not equipped to tap into the traditional benefits of a public company in a climate of widespread investor antagonism towards shipping.

Having built a shareholding in the company of about 83%, he bought out remaining investors for about $75m to take DryShips private after more than 14 years on Nasdaq.

This may not be the end of the public markets for his group. He does not rule out a future return, particularly for a capital-hungry project such as the group’s liquefied natural gas carrier arm, TMS Cardiff Gas, helmed by son Christos.

Yet if so, it is unlikely he will want to personally front any more investor roadshows. No longer being listed is unlikely to equate to any loss of influence.

A constant in his playbook, though, is: “You always have to be diversified.”

Mr Economou and his team now control a privately held fleet of about 130 ships, including 50 tankers, 57 bulkers, six offshore support vessels, one containership and the TMS Cardiff Gas fleet of five LNG carriers in the water, with 11 on order — one of the biggest construction programmes in the sector.

All the LNG carriers are fully financed and long-term chartered.

The group also owns the Heidmar tanker pools business and Mr Economou is a 10% shareholder in US-listed containership owner Danaos.

The long-term LNG charter portfolio can be taken as a sign of his group’s yearning to dial down the risk-taking in future but reduction of risk is relative in the Economou universe.

Looking back at the bulk and tanker businesses, what is most eye-catching right now is one of the biggest exhaust gas-cleaning system programmes in the industry.

Mr Economou personally believes allowing scrubbers to be seen as equivalent to burning low-sulphur fuel was a regulatory error.

However, in typical fashion, he has gone all-in with retrofits for all vessels under 15 years of age, irrespective of size.

As a spot market player, the group will shoulder the entire cost of the programme, which could reach $450m or more, but will be hoping to reap the benefits.

This contrasts with many significant scrubber installation programmes that have been funded by time charterers.

As a realist, Mr Economou has never sugar-coated the shipping business that has made his fortune. Recently, he told an industry conference that owners are merely glorified taxi drivers.

Tramp shipping in particular is “taxi drivers in New York without the tariffs”, he says, elaborating to Lloyd’s List: “It’s a mature business, cut-throat, highly fragmented and price-sensitive.”