Every one-foot reduction in draft is equivalent to about 350 loaded containers. That means boxships sailing from Asia to the US east coast via the Panama Canal will have to carry less cargo than normal in order to transit the waterway during times of drought, with Dr Vásquez now fast-tracking research into possible solutions after one of the driest years on record for Panama 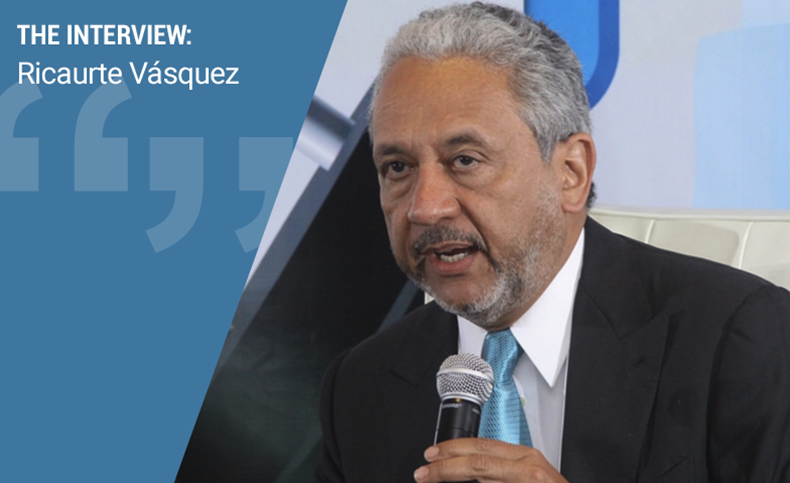 Every one-foot reduction in draft is equivalent to about 350 loaded containers. That means boxships sailing from Asia to the US east coast via the Panama Canal will have to carry less cargo than normal in order to transit the waterway during times of drought, with Dr Vásquez now fast-tracking research into possible solutions after one of the driest years on record for Panama

The Panama Canal Administrator may be in charge of a waterway that links two of the world’s greatest oceans, but that is the wrong sort of water.

Dr Vásquez needs brackish water, not sea water, in order to preserve water quality in the Gatun Lake, which forms part of the navigational channel that slices through Panama.

“Our predicament is that we are surrounded by water and we do not have enough,” he says.

Climate change is having a very severe impact on the level of water in the 80-kilometres-long Panama Canal, with ships often having to sail through without a full payload because of draft restrictions.

That affects both shipowners’ income levels and the revenues of the canal authority — the Autoridad del Canal de Panama, or ACP — while also presenting the rival Suez Canal with an advantage as the two waterways compete for traffic from Asia to the US.

“We are being hit not only by less rainfall, but also different rainfall patterns, while average temperatures are higher,” says Dr Vásquez.

“This is the driest year on record,” he continues. “This is a unique situation.”

The new canal administrator took over in September from Jorge Quijano, who had overseen the construction of the new locks which greatly expanded capacity. This in turn opened up new trade opportunities, particularly for container lines.

The original locks could only handle vessels of up to around 4,500 teu, whereas containerships with three times that capacity can now go through the new locks.

But unless there is sufficient water depth, the Panama Canal will not be able to take full advantage of its expanded capacity.

Dr Vásquez admits his main concern right now is to make sure the canal has enough water to provide a reliable draft for ships.

Every one-foot reduction in draft is equivalent to about 350 loaded containers. In other words, containerships sailing from Asia to the US east coast via the Panama Canal, for example, will have to carry less cargo than normal in order to transit the waterway during times of drought.

The canal has had severe water limitations throughout 2019, according to Dr Vásquez, who is now fast-tracking research in to possible solutions.

A fully-laden 14,000 teu ship, the largest that can go through the new locks, needs up to 45 ft of water, “and we are trying to guarantee that draft”, he says.

That means finding new sources of water in the next two or three years.

A number of options are being considered, including construction of a new reservoir, using recycled municipal water, or desalinisation, while at all times preserving the ecological balance of the lake through which the navigational channel goes.

But in the short term, the authority wants to make use of technology to provide shipowners with the very latest weather and draft conditions, along with projections for a few weeks ahead. That will enable customers to make the right decisions when loading ships in Asia, and avoid having to offload some cargo before transiting the canal when water levels are low.

Dr Vásquez says work on a new information platform will start almost straight away, and he is urging customers to make full use of the upgraded website at the voyage planning stage.

A water shortage is not the only difficulty facing the Panama Canal Authority, with both international trade tensions and regional economic problems having a business impact.

The new locks were mainly designed with manufactured products in mind. Containerised traffic from Asia to the US represents the world’s biggest trade. However, shipping lines have a choice of route, from Asia to the North American west coast and then by rail to the US heartlands; via the Suez Canal to the US east coast; or across the Pacific and through the Panama Canal to US Gulf and Atlantic seaboard ports, which are rapidly upgrading their facilities to be able to handle vessels of 14,000 teu or more.

By building a new set of locks, ACP hoped to encourage container lines to introduce more all-water services from Asia to the North and South American east coasts via the Panama Canal.

However, numerous Latin American countries are suffering from political unrest and economic stagnation, which is weakening the region’s imports and exports, while the China-US trade war is hitting volumes on that all-important shipping route.

The master plan for the locks was based on predictions that containerised trade would continue to be the driver of economic growth, but since then, “the world has changed somewhat”, he observes, with a resurgence of protectionism and more regional trade.

Some of these developments will not affect the Panama Canal, says Dr Vásquez, citing as an example of the revived Silk Road that covers trade between Asia and Europe.

“The relevant market for us will be the transoceanic trade that goes from one ocean to another, one way or another, and crosses the Panama Canal,” and this is highly dependent on US purchasing power.

But the pattern of trade is changing.

While container traffic through the canal is still the most important element, currently accounting for 45% of transits through the new locks, this source of ACP income nevertheless faces numerous restraints.

In addition to regionalisation and the new composition of products going through the canal, technology could also have an impact on Panama Canal traffic if robotics shift where consumer goods are manufactured.

While these are “the headwinds we are facing”, the increase in energy-related products “represent the tailwinds”, says Dr Vásquez,

LNG and LPG tankers now represent close to 40% of transits as US energy exports to Asia grow, according to ACP data for the latest fiscal year that ended in September.

“Container traffic represents the largest share of our market but the fastest growing are energy related products,” according to Dr Vásquez.

This has an impact on Panama Canal revenues since, as Dr Vásquez notes, “tolerance to transport costs is greater for manufactured goods than commodities”.

That means higher tolls for containerships than other types of vessels. So as the composition of ship traffic alters, so the average charge per tonne is lower now than a couple of years ago.

At all times, the ACP keeps a close watch on the Suez Canal for both container and tanker traffic.

As manufacturing in Asia moves further south or west, the Suez Canal becomes more viable for US-bound containerised merchandise. At the same time, the Suez Canal can handle larger tankers than the Panama Canal with its draft constraints, including very large crude carriers.

But Dr Vásquez is confident that the Panama Canal will continue to handle a significant share of Asia-US shipments, since, whatever the comparative costs, voyage times, or maximum ship sizes, “I do not believe that from a transportation perspective, you will put all your eggs in the same basket”.

Dr Vásquez was was already very familiar with the Panama Canal Authority when he started his new job a few weeks ago, having been the first Panamanian finance director of the waterway, from 1996 to 2000, while he also served as deputy administrator between 2000 and 2004.

Next, Dr Vásquez was appointed minister for canal affairs and chairman of the board of directors from 2004 to 2006.

Earlier, he had held several relevant positions as Panama’s minister of planning and economic policy; chief debt negotiator for the refinancing programme of the Republic of Panama, and minister of economy and finance.

Dr Vásquez also had long spells in the private sector, holding senior positions with General Electric from 2008 to 2015 including chief executive for Central America and the Caribbean.

Now, he holds one of the most high-profile positions in shipping, and spoke to Lloyd’s List during the recent Global Maritime Forum meeting in Singapore attended by top-level executives from across the maritime industry who had come together to consider how to address burning issues of the moment such as safety, decarbonisation, and skills.

Infrastructure has also always been high on the shipping agenda, and three years after completion of one of the world’s most ambitious construction projects that opened up new trade opportunities for countries in Asia, the Americas, and Europe, Dr Vásquez hopes Mother Nature will come to the rescue and help restore water levels.

But praying for rain is not enough, with Dr Vásquez now actively looking for new sources of water that will enable the ACP’s customers to take full advantage of the new locks.