Shipping should shape its own path to decarbonisation


The industry must show more progress on its path to decarbonisation to avoid being included in the EU Emissions Trading System, while a carbon levy may lead to an easier market-based mechanism that can create a level playing field for all shipping firms 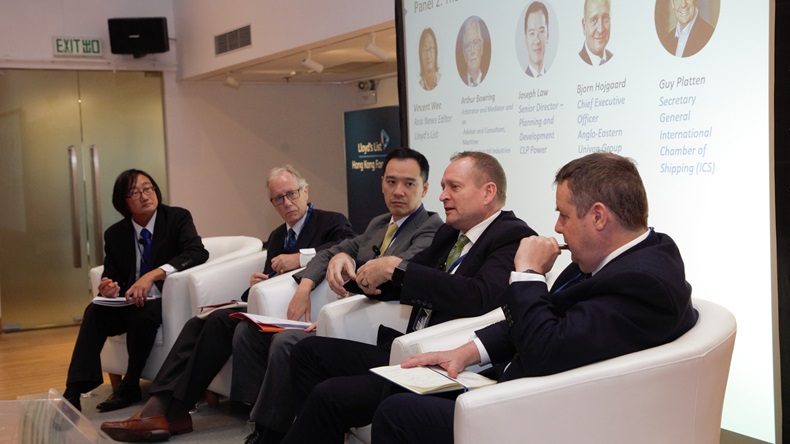 THE shipping industry has a desire need to ramp up its decarbonisation initiatives amid unsettling political imperatives from Europe, a Lloyd’s List forum was told.

As the incoming European Commission president Ursula von der Leyen prepares to assume office next month, the maritime sector is under rising pressure to be included in the EU Emissions Trading System.

“Emissions trading is not a good idea for the maritime industry. It would be a very difficult thing for many of our smaller companies to deal with,” said Arthur Bowring, former Hong Kong Shipowners Association managing director and president of the Hong Kong Maritime Arbitration Group.

To avoid such a problem, the shipping sector must demonstrate willingness and capability on its commitment to slash the sector’s greenhouse gas emissions by at least 50% by 2050 compared with 2008, Mr Bowring told the Lloyd’s List Hong Kong Innovation Forum.

“Otherwise, we are going to have something forced on us, which we really do not want,” he said.

The pressing challenge for shipping to decarbonise is recognised by the industry, said Guy Platten, secretary-general of the International Chamber of Shipping. “Everywhere I go now, it is on the top of the agenda,” he told the delegates.

The first priority was to agree on the short-term measures, on which member states’ views appeared to be coalescing during the recent intersessional working meeting at the International Maritime Organization, Mr Platten added.

That situation has strengthened his confidence the industry will hit its 2030 target by reducing CO2 emissions by 40%. “We’d like to get the short-term measures signed off and we have to be up and running by 2023, and then focus on the big challenges,” he said.

Using liquefied natural gas as a transitional marine fuel to help reduce emissions was subsequently brought up by the panellists.

Although Hong Kong has been left behind by other shipping hubs in this respect, Mr Law said the upcoming offshore LNG terminal, expected to enter operation in 2020, would provide an opportunity for the city to catch up.

But to reach the 2050 GHG emissions reduction goal, shipping will need even cleaner fuels, although none of the current options, including hydrogen and ammonia, provides a “silver bullet” that can be produced at scale and in a sustainable way yet, argued Mr Platten.

He said that the industry required a “concerted effort in research and development” of zero emissions technologies and fuels.

“We’re working with other industry partners to come up with proposals to see how we can put together an R&D fund and how that could be potentially funded via a certain levy on fuel,” he said.

He also said that governments worldwide should cut the massive subsidies to fossil fuel producers to prompt switching to a carbon-neutral energy. The US and EU are estimated to give direct subsidies to the fossil fuel industry of about $20bn and $50bn each year, according to a recent study from Environmental and Energy Study Institute.

Mr Bowring said a shipping carbon levy may lead to an alternative market-based mechanism — other than the EU’s Emissions Trading System — that could create an easier approach for the industry to adopt.