As part of our 2019 Top 100 most influential people in shipping series, we look at the very best global insurance power-brokers 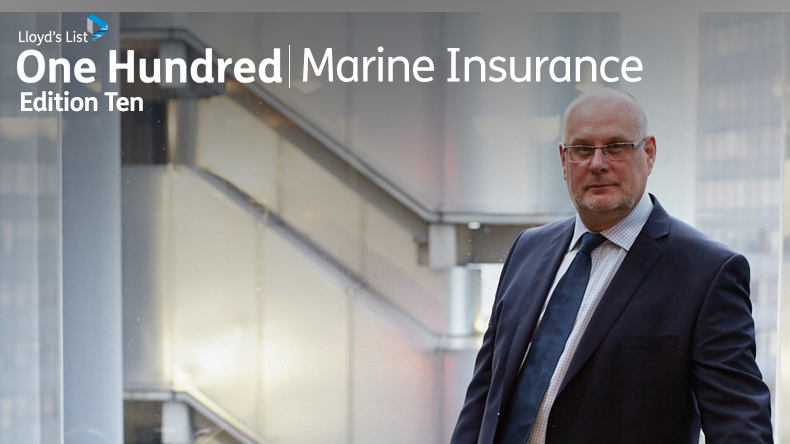 Hancock: had more impact than anyone in the world of marine insurance.

A STRONG case can be made that Jon Hancock has had more impact than anyone in the world of marine insurance over the past year or so, thanks to his role in persuading at least a dozen unprofitable marine syndicates to consider their options (or else).

Many regard the cull as painful but necessary, not least because it has firmed up pricing for those who have stayed the course. In any event, it is not over yet. “I suspect there is more to come,” one of our sources told us.

Appropriately enough, director of performance management Mr Hancock actually started as a marine underwriter in the Liverpool office of RSA and spent more than 25 years with that company.

He took on his present job — with responsibility for performance management, capital setting and risk management in the Lloyd’s market — in December 2016.

INSURTECH is something of a buzzword in marine insurance right now, and Andy Yeoman’s Concirrus has emerged from the starting blocks as a clear leader in the space.

And, for an increasing number of believers in senior positions, that is more than marketing hype.

Customers include Willis Re and — since last August — leading P&I club Skuld.

Another indication of Concirrus’s current standing in the marine insurance niche is the appointment of former Munich Re kingpin Dieter Berg as a non-executive director.

MARCUS Baker earns his place on any marine insurance top 10 on account of his job as head of global marine at one of the world’s biggest brokers in the niche.

Mr Baker started his career at J&H after graduating in the early 1980s and joined Marsh when it acquired his employer 25 years ago. He has been there ever since.

A notable enthusiast for digitalisation, he is likely to ensure that Marsh-JLT remains at the forefront of the technology developments that are having an ever-increasing impact on the discipline.

INDUSTRY veteran Richard Turner has relocated from his native Essex to Luxembourg, from where he manages RSA’s global specialty business in Europe as chief executive.

Yet if that role were not high-profile enough, he is possibly even better known as president of the International Union of Marine Insurance since 2018.

Mr Turner’s 35-year career has largely specialised in marine, starting out as a hull underwriter before running RSA’s marine market operations first in London, then in Europe and ultimately worldwide.

SWISS RE Corporate Solutions’ head of marine Patrizia Kern-Ferretti is another IUMI stalwart and sits on that organisation’s executive committee.

However, she has come to the notice of the industry this year for her role in her employer’s decision to stop underwriting marine cover in London and centralise the function in the Italian city of Genoa instead.

The move followed a first-half loss of $403m at Swiss Re , which has made addressing profitability imperative.

In the internet era, the switch should make very little difference for the customers. The question is, will it mark the start of a gradual drift of marine business away from the UK capital?

Ms Kern-Ferretti is also credited with Swiss Re Corporate Solutions’ introduction of a new model for cargo insurance, based on behavioural analytics.

HEATHER Clarkson is another woman at the top of the marine broking tree, after global wholesale insurance and reinsurance broker Ed last year poached her from her job as head of hull at Aon Risk Services to be its head of marine business.

She also has 20 years at Marsh on her CV, including a stint in Montreal, and has also worked for Millers.

Ed is a Lloyd’s broker and its range of marine coverage is deliberately broad, ranging from hull and machinery and protection and indemnity to bespoke specialist products for individual clients, including political risks, contract frustration, business interruption, counterparty insolvency and revenue protection.

FORMER lawyer Nick Shaw took over from Andrew Bardot as chief executive of the International Group of P&I Clubs earlier this year and is “doing a rather good job of it”, we are reliably informed.

Mr Shaw is from a shipping family. Indeed, his father was at one stage chair of Furness Withy, a famous British shipping company of yore.

After a teenage passage as a supernumerary on a boxship to South America, he was hooked and decided to study at shipping law at Southampton University.

On graduation, he had his first-ever job interview, which landed him a trainee place at Richards Butler, subsequently swallowed up by Reed Smith.

CEFOR, the Nordic Association of Marine Insurers, is the main representative body for what is the largest single marine market outside London.

Managing director Helle Hammer has been running the show since 2007.

Her CV includes early jobs in politics and the civil service, as well as a stint working in Houston for a state-owned investment institution.

She is also active in IUMI.

BEAZLEY participates in the hull insurance of something like 20% of the world’s ocean-going trading tonnage, so the position of head of marine is a big job that was, until recently, filled by Clive Washbourn, one of the rock stars of marine underwriting.

Mr Washbourn stepped down in February this year for unspecified personal reasons, with the company expressing the hope that he will return at some point.

Meanwhile, Tim Turner has stepped into his shoes, giving him responsibility for around 16% of Beazley’s entire gross written premiums.

Mr Turner has been with Beazley since 1998 and sits on its security and underwriting committees. He joined its executive committee in December 2018.

ASIA is of growing importance in hull insurance and at the forefront of the sector in that region is Rama Chandran, head of marine at QBE.

There followed spells as a marine underwriter at Swiss Re, head of marine at Asia Capital Re and class underwriter at Argo before taking his current job in 2015.

The Top 10 in marine insurance list is collated by the Lloyd's List editorial team and considers a mixture of traditional power-brokers in an insular niche, and those doing noteworthy things within it