After three years at helm, the chairman of Taiwan-based Yang Ming has put the idea of ordering super-sized boxships on the back burner, with The Alliance to welcome a new member next year. His optimism about the market prospects is laced with caution and he believes the company’s investment in scrubbers will pay off. For all those wondering, Yang Ming is not considering any merger deal. 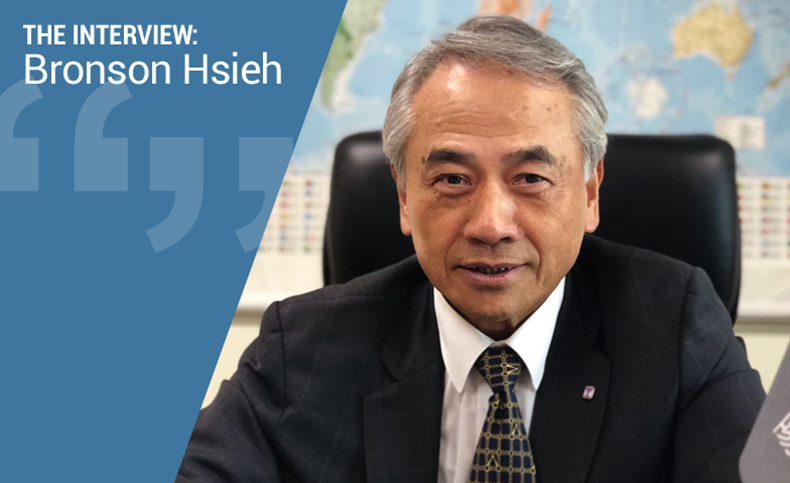 After three years at helm, the chairman of Taiwan-based Yang Ming has put the idea of ordering super-sized boxships on the back burner, with The Alliance to welcome a new member next year. His optimism about the market prospects is laced with caution and he believes the company’s investment in scrubbers will pay off. For all those wondering, Yang Ming is not considering any merger deal’

No merger with Evergreen

IF the industry has a worry at the moment about more liner companies rejoining the urge to splurge on super-sized containerships, there is at least one less spender to worry about.

Yang Ming Marine Transport, the world’s eighth largest carrier in fleet capacity, has put the thought of ordering super-sized boxships on the back burner, chairman Bronson Hsieh tells Lloyd’s List in an interview.

With more than 40 years in the sector, Mr Hsieh has been working tirelessly to lead the Taiwanese company out of the woods and restore its competence. The former Evergreen Group vice chairman took the helm of rival Yang Ming in June 2016 when the latter was in critical condition.

Today, its finances have improved from three years ago, albeit not yet at a comfortable level. Its fleet renewal plan is on track with the recent charters for a string of 11,000 teu newbuildings from Shoei Kisen and Costamare.

When interviewed by Lloyd’s List last year, Mr Hsieh said his company was pondering the idea of entering the super-sized boxship club. Among the top eight global carriers, only Yang Ming has not been equipped with vessels of 20,000 teu or more — the main workhorse on Asia-Europe trade nowadays.

However, the liner shipping old hand has changed his mind.

The regulatory uncertainty from the European Union has already contributed to the hesitation to order, according to Mr Hsieh. The European Commission has yet to decide whether to extend the five-year container shipping block exemption regulation, which is due to expire in April next year.

But even if it is extended, the enrolment of Hyundai Merchant Marine in The Alliance has “lessened the need for big vessels,” he says, adding that the new partnership will be fixed for 10 years to enhance stability.

Mid-sized Yang Ming now relies on The Alliance, whose members also include Hapag-Lloyd and Ocean Network Express, to gain the scale it needs. The extension and expansion of the grouping will lead to an increase of the benefits, he argues.

HMM’s existing fleet size only ranks 10th in the world, according to Alphaliner’s statistics. But the South Korean carrier is boasting an orderbook with a dozen 23,000 teu ships and eight 15,000 teu ships to be delivered from the second quarter of 2020.

The entry of these vessels will help the four carriers ramp up their combined Asia-Europe market share to nearly 30% upon full delivery, even though the two other shipping alliances — Ocean and 2M — still have much more ultra-large ships in their fleet.

His stance also appears not to have been altered by recent speculation that both of Yang Ming’s two existing alliance partners were interested to pursue more super-sized tonnage.

“It’s always possible that some of the alliances may want to expand their market share in future and that will require additional loops of larger vessels,” he says, “But history tells us when the market is not particularly lucrative, filling the ships on the water is more important than ordering new ones.”

Carriers have been struggling to lift rates that remain weighed down by lingering overcapacity on most trades this year, despite the “mini-recovery” in recent weeks cited by Drewry. The sluggish freight markets will, in turn, put pressure on carriers' financial strength and their affordability of any large newbuilding project.

For the next year, Alphaliner has forecast a more balanced picture. Container growth is expected to speed up to 2.8% from 2.5% this year, while fleet expansion is to slow down to 3.1% from 3.9%.

The prospects could easily turn bleaker, though. Both the demand and supply growth rate this year were revised to reflect the shifting market conditions. The former was pared down from the previous estimate of 3.6% after the US-China trade battle heated up, while the latter was ratcheted up owing to a disappointing demolition activity, the consultancy said.

A shipping business leader as experienced as Mr Hsieh would always stay cautiously optimistic. The new products to be launched by The Alliance on April 1, 2020 “won’t have much increase in new capacity deployment,” he says.

The market equilibrium is becoming ever more critical for carriers next year. Because it will not only step up freight rates but also carriers’ ability to pass the extra costs of the compliant fuel — as a result of the 2020 sulphur cap implementation — on to shippers.

Large beneficial cargo owners have already shown a willingness to foot the green bill by adding bunker surcharge terms to the service contracts, subject to transparency on carriers’ formula, according to Mr Hsieh.

“From a carrier’s perspective, we hope all our customers, whether they’re beneficial cargo owners, freight forwarders or spot shippers, will support the surcharge,” he says. “But you know how much they’re willing to pay for the low sulphur fuel is eventually a question about supply and demand.”

To reduce its exposure to that unpredictability, Yang Ming chooses to fit its newbuilding fleet with scrubbers, which allow the burning of dirtier but cheaper high sulphur fuel oil. In addition, it will also retrofit a number of existing mega-ships to install the exhaust gas cleaning system at the end of this year.

He’s the grandson of a man who survived the Scott of the Antarctic expedition and went on to write the rules of professional wrestling. But after half a century in shipping, Lord Mountevans has his own claim to fame as a figurehead for London’s maritime cluster.

Upon completion, the scrubber-fitted vessels will account for almost 30% of the company’s total fleet capacity, according to Mr Hsieh.

He expects a spread of $200-$300 per ton between low-sulphur and high-sulphur fuels heading into 2020. “In that case, the long-haul ships can recover the scrubber investment pretty fast in one or two years.”

The shape of that price gap, together with the International Maritime Organization’s verdict on open-loop scrubbers, will also determine whether Yang Ming will adopt the equipment on more of its vessels.

The discharge of wash water from open-loop scrubbers has been banned by several major maritime nations, including China and Singapore, citing environmental concerns. At the same time, countries such as Japan have offered open support to such technology. The IMO has agreed to start a discussion next year to harmonise the relevant rules.

The budget-friendly, open-loop scrubbers that Yang Ming has opted for are all “hybrid-ready”, meaning the devices can be retrofitted into a close-loop solution later on to meet stricter discharge requirements if needed, Mr Hsieh says.

Other than sulphur residuals, the chairman also proudly claims that his company’s fleet this year has slashed CO2 emissions per transport work by 50% compared with 2008, outdoing the IMO’s target of a 40% reduction by 2030.

It is an achievement that has been made through various energy-saving efforts, including fleet renewal plans as well as more efficient ship designs and technologies.

Mr Hsieh has pledged another 15%-20% cut by 2025, which will ensure that Yang Ming is more than prepared to to hit the reduction level set by IMO for the average shipping firms by 2050.

For Kaohsiung-based Yang Ming, the most pressing task is, of course, to sustain the challenging market conditions.

The carrier was still in the red for the first three quarters of 2019, although the losses were narrowed from the year-ago period.

Results remain to be seen for the remainder of the year. The traditional summer-autumn peak seasons on long-haul routes are not what they were given the disruptions in trade flows. And a weak fourth quarter is set to lead to the first full-year contraction on the transpacific trade in a decade.

Mr Hsieh expects a rebound in cargo volume at year-end, with the arrival of the Chinese New Year in January. But it is unlikely to repeat the December soar witnessed last year driven by the tariff-led rush orders, he says.

Nevertheless, the current alliance structure has enabled member carriers to adjust their capacities more swiftly to smooth out the volatility.

Therefore, shipping lines’ bottom line won’t fluctuate as significantly as it did in the past. Therefore, the odds of further mergers and acquisitions among major players in the sector are so much lower now, Mr Hsieh contends.

A merger of Yang Ming with other carriers is not on the table, either.

“As I said before, we intended to keep the business to our own,” he says. “That has not changed.”

He is confident that, with a refined approach to operational efficiency and capacity management, Yang Ming will overcome the challenges and get back on its feet.