Venezuela oil exports were at lowest level for 30 years last month, with nine tankers loading the equivalent of 290,000 barrels per day in October

Rosneft’s trading arm is vital to Venezuelan crude sales as Chinese refiners shun direct purchases since the US administration tightened sanctions in August. Instead Venezuela to China shipments arrive via Malaysia, through ship-to-ship transfers undertaken from Rosneft-controlled tankers

Source: © Shutterstock/Kapustin Igor State-owned Russian oil company Rosneft has used its stake in Nayara Energy as an intermediary to circumvent US sanctions.

CRUDE exports from Venezuela have dwindled to multi-decade lows as Russian oil company Rosneft, now responsible for sales, resorts to ship-to-ship transfers and prolonged floating storage off Malaysia to disguise the origin and destination of unsold cargoes.

“About 80% of all ships (are) being chartered by the Russians, but with the majority of that ending up in China, Malaysia or Singapore. In that sense, the Chinese are using the Russians as their ‘beard’ to cover for them.”

State-owned Russian oil company Rosneft has used its stake in Nayara Energy, which owns India’s Vadinar refinery, as an intermediary to circumvent US sanctions that prevent sales of Venezuelan crude being sold using US-dollar transactions.

Instead Venezuela-China shipments are seen arriving via Malaysia, through STS transfers undertaken from Rosneft-controlled tankers. Crude shipments were tracked from Malaysia to China at 460,000 bpd in September, a 24-month high, according to Lloyd’s List Intelligence.

The last tanker laden with Venezuelan crude that directly discharged a cargo at a Chinese port was on November 5, vessel-tracking data shows. However that suezmax tanker, Ottoman Courtesy, first spent three weeks in floating storage off the coast of Malacca port, according to Lloyd’s List Intelligence data. It then sailed on October 6 and discharged off Tianjin on November 5.

The tanker is one of four tracked calling at China since September 2019, a dramatic fall from pre-sanctions monthly import levels. When the US administration imposed its sanctions in late January, Chinese imports measured at 270,000 bpd per day in February. 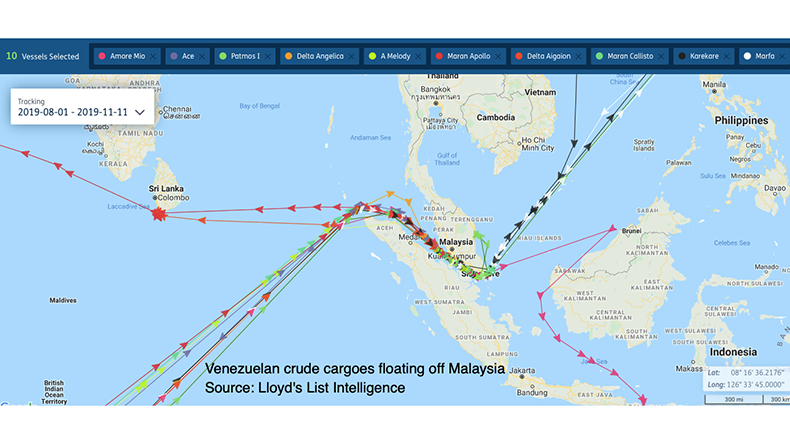 Tankers sailing east to Asia with Venezuelan crude are regularly spending between two to three weeks at anchor off the coast of Malacca or Port Dickson, a known area for floating storage and ship-to-ship transfers.

The development was first noted in June and escalated in the past four weeks. The strategy mirrors Iranian sales of sanctioned crude and refined products, which centres on the use of ship-to-ship transfers the Malaysian floating storage hub to further obfuscate cargo origins.

As many as nine tankers laden with 12m barrels of Venezuelan crude were observed in floating storage off Malacca during the first week of November, data shows. That included four suezmax tankers, four very large crude carriers and one aframax tanker.

Most have now resumed their voyages, including three which sailed to China. Others discharged cargoes on to other unidentified ships before leaving the area in ballast to other destinations.

“We were normally expecting the ships would be headed to Nayara, Rosneft’s refinery on upper west coast of India,” said Mr Dallen. “The ships use a variety of methods to try and fool us, including turning off their transponders and signalling waypoints instead of final destinations. We have even noticed some ships saying they were in Curacao and actually picking up in Venezuela.”

Mr Dallen said floating storage and slow-steaming to destinations in Asia signal that Rosneft is finding it difficult to sell cargoes. Tankers laden with Venezuelan crude also repeatedly signal different destinations to Chinese ports during their voyages, he said.

“We think (this) reflects more the sketchiness that even they (the tankers) do not know where the product is going as it is in limbo or repeatedly sold and resold like a hot potato,” according to Mr Dallen.

Venezuelan oil supply was estimated at 650,000 bpd in September, according to the International Energy Agency, compared with 800,000 bpd the previous and 70,000 bpd lower than at the start of 2019.

The decline is attributed to operational difficulties and sanctions pressures with Venezuela’s oil company PDVSA struggling to arrest a diminishing list of customers, the IEA said in its monthly report published three weeks ago.

Adding to difficulties are current chartering clauses inserted by Unipec and Exxonmobil in early October that prohibit the use of tankers that have called at Venezuela in the past year. This covered 88 VLCCs and 115 suezmaxes, Lloyd’s List Intelligence data shows.

Rosneft did not respond to an emailed request for comment.

Sanctions on Venezuela start to bite