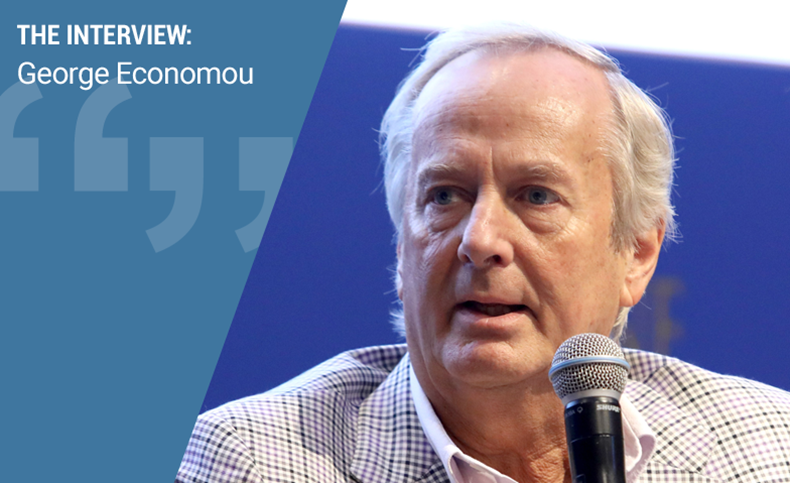 WHEN George Economou first became a shipowner 33 years ago, selling his New York apartment to help raise the funds, it was in partnership with fellow latter-day Greek shipping luminary Petros Pappas.

DryTank, their 50:50 co-owned venture, acquired several ships at an opportune time in the market, but after three years a more conservative Mr Pappas wanted to realise some of the profits while his partner wanted to continue expanding.

Soon after Mr Economou was left with 90% of the equity in the company and that was how the partnership, by all accounts a good one, naturally dissolved.

According to Mr Pappas, his former college mate and partner was an “invincible force” to his “immoveable object”.

Fast forward three decades, despite a Parthenon frieze-length series of business adventures and drama in the interim, the George Economou giving this interview to Lloyd’s List still very much fits Mr Pappas’ description.

Yes, he probably spends at least as much time on the art business as on shipping these days. And yes, there has been at least some evolution in his appetite for risk. However, the modifications sound like fine brushstrokes.

Mr Economou seems as relentlessly forward-focused and engaged with the shipping business as he was back then.

We are talking in the wake of the recent delisting from Nasdaq of his signature DryShips company after 14 tumultuous years. Already an 83% majority shareholder, the shipowner paid $5.25 per share to outside investors for the remainder of the company and to take it private.

He’s the grandson of a man who survived the Scott of the Antarctic expedition and went on to write the rules of professional wrestling. But after half a century in shipping, Lord Mountevans has his own claim to fame as a figurehead for London’s maritime cluster.

“There are two reasons to for being public,” says Mr Economou. “You go public because you need the money to grow and it gives you an easier exit than selling the vessels in the market.”

But with the capital markets so shipping-averse for the past few years, exemplified by the lack of a genuinely successful industry initial public offering since 2015, neither of these motivations had applied for some while, he says.

DryShips’ stock had not moved and was trading below net asset value.

“Raising money below NAV is dilutive and it would have been a long uphill battle to convince retail investors that the company should be valued higher,” says Mr Economou. Effectively, “the only way forward was to go private”.

While stocklisted life has had its frustrations, he is not ruling out a return some time down the road even if the prospects for capital markets to reopen to shipping in the short term seem muted.

“I think if there is a team that would like to go back with a new project, yes, we could do it. I do not think that I will be the one doing the roadshows any more though,” he says.

One obvious candidate sector would be the LNG carrier business. The 11 fully-owned LNG carriers under construction in carrier are all long-term chartered to leading energy companies and fully financed. But LNG carriers are expensive assets and it is a sector where it can be difficult to “grow organically”, says Mr Economou.

Of the existing fleet, four 2011-built LNG carriers that are majority-owned by MatlinPatterson, the distressed investment fund, have been circulated for sale although there is almost no secondhand market for young LNG carriers.

The expiry date for the fund elapsed a couple of years ago and so the group’s partners understandably are seeking an exit, Mr Economou explains.

One solution that has been under consideration for the best part of two years would be to combine the vessels with those of one or more other owners, including Golar LNG, in a spot-focused LNG fleet to be publicly floated in the Norwegian market.

Lloyd’s List has separately reported that the Cool Company, as the project was to be named, has been delayed. According to Mr Economou, the project is “not dead” and, compared to trying to sell the vessels, “the easiest way forward is through a capital markets transaction”.

While the group’s LNG carrier fleet provides “a very good platform for growth”, the shipowner is also optimistic about the immediate future for the other markets in which he still has considerable exposure.

“We have ahead of us two to three years of good markets both in tankers and dry bulk because the orderbooks are not so big,” he says. “The question is to what extent demand will grow. There are some concerns here.”

While there is a mini-bulge in capesize deliveries for next year that is larger than he would have liked, in general orderbooks are manageable, he believes. “But we hope that people will not order a lot more newbuildings,” he adds.

Reflecting on what has been a 14-year-long roller-coaster ride on Nasdaq, he says: “Overall, the public story was good for us. We started with six ships and we were able to expand the company a lot.”

DryShips was teetering on the verge of bankruptcy in 2016 and it has been an impressive act of resurrection to restore the business. “I did not want to have a failed public company,” he says.

At the same time, his Nasdaq-listed offshore drilling company, former DryShips subsidiary Ocean Rig, was also being buffeted by the collapse of oil prices and with them the drilling market.

“We went into the drilling business because I saw volatility in the tankers and bulkers and that was an industrial play. The slump that happened was totally unprecedented and market conditions are still ugly even today.”

A year ago, a $2.7bn merger with market leader Transocean was consummated, leaving Mr Economou with a 2% shareholding.

“If you want to be successful in the drilling business you need size, so we said let’s merge,” he reflects.

“We have taken a lot of risks. We have gone through the ups and downs and we’ve been beaten up so many times. Going forward we want to take more seasoned decisions that will be less risky.”

One aspect of this is to mitigate as much as possible what he sees as aggravated technological risk in the industry.

“The problem is that the means to cut emissions by 2050 and substantially by 2030 currently does not exist,” says Mr Economou. “Today the only way forward is LNG-powered ships. As a fuel, LNG offers a better footprint for now. But we would not do anything without a long-term charter because otherwise there is too high a risk of new ships being developed that are better for cutting CO2.

“Suddenly you can have a very young fleet that has become obsolete.”

At the same time, however, the group has embarked on one of the industry’s largest exhaust gas cleaning system programmes.

Mr Economou has no hesitation as describing International Maritime Organization legislation allowing for scrubbers as “the wrong decision”, for industry reasons rather than scientific or environmental qualms.

However, it has plunged ahead with installing scrubbers on every vessel, irrespective of size, that is under 15 years of age.

The total cost of the programme of about 100 ships, including drydocking and other costs, is said to come to about $450m. Of the direct scrubber acquisition costs, about 30% is understood to have been financed.

So far scrubbers have been installed on 20 bulkers and a dozen of the tankers.

“By June next year we should be complete although if the markets are good in the next two quarters, we may put that back a bit,” he says.

The scrubber programme appears to be a striking bet in the grand Economou-style. Unlike many leading shipowners that are opting for scrubbers, he is neither publicly listed nor getting time charterers to foot all or most of the bill.

“We are in the spot market,” he notes. “We decided we will take the cost and hopefully we will also take the benefit.”

Asked at a recent conference for what he most wishes he had done differently in his career, Mr Economou said: “No regrets in life… but I would do everything differently.”

What is most clear is that looking back is much his less his style than looking forward.

“Where is shipping going?” he asks. “It’s a dynamic business with fast-depreciating assets. The regulations may say 25 years and ships may be built for a lifetime of 40 years. But commercially the lifespan may be 20.

“How do you stay active and relevant in this business? You have to look forward. If you stop to look back it means you must have aged.

“I don’t want to be in that position. You have to evolve,” he says.

DryShips to de-list from Nasdaq after Economou buyout approval