Reliance made several new deals during 2019. In August, Shri Mukesh Ambani told shareholders of a deal he struck with Crown Prince Mohammed bin Salman of Saudi Arabia for Saudi Aramco to take a 20% stake in his Reliance Industries' refining and petrochemicals division

Chairman and managing director announced a joint venture with BP, under which the European oil major would buy 49% of the Indian firm's petroleum retailing business 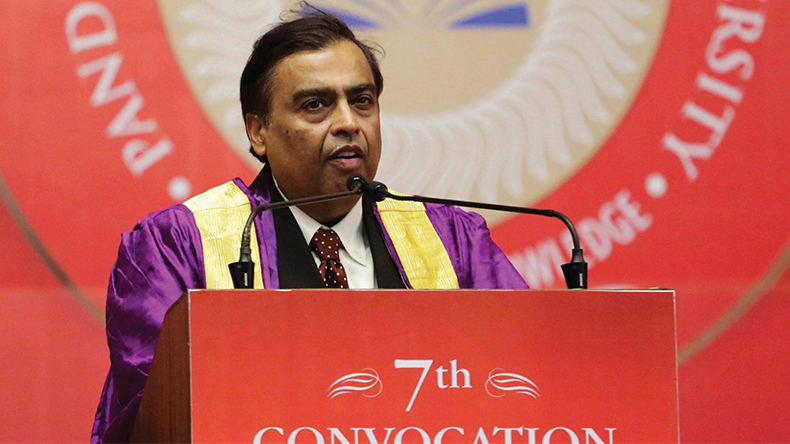 A HUMOROUS but insightful story has been circulating on social media this year about Reliance Industries' chairman and managing director Shri Mukesh Ambani.

In it, Mr Ambani rubs a magic lamp and a genie appears — but the traditional roles are reversed, as the Indian tycoon is the one granting wishes. "What do you want? Tell me," he says.

That anecdote says everything about the past year for Mr Ambani, long pegged as Asia's richest person, with a fortune estimated at $56bn at last count.

He has come a very long way indeed from his humble birth in Yemen — and clearly still has plenty more ahead of him.

Perhaps the leading highlight of the year came in August, when Mr Ambani told shareholders of a deal he had struck with Crown Prince Mohammed bin Salman of Saudi Arabia for Saudi Aramco to take a 20% stake – valued at $75bn – in Reliance Industries' refining and petrochemicals division.

The deal is a win-win for both sides, linking the world's largest oil exporter with its fastest-growing consumer. The new agreement of 500,000 bpd represents about 40% of Reliance's crude requirements and doubles the amount that Saudi Aramco has traditionally supplied to the Indian firm.

With a ready supply of Saudi Arabia’s heavy crude and one of the world's most complex oil refineries, Reliance Industries is now extremely well positioned to benefit the maritime world — and benefit from it — as the new regulations of IMO 2020 begin coming into effect.

Mr Ambani could barely contain his enthusiasm, saying "the future of India — and also the future of Reliance — has never looked brighter".

However, that lustre shone even more brightly when Mr Ambani announced a joint venture between Reliance and BP, under which the European oil major would buy 49% of the Indian firm’s petroleum retailing business — a deal worth Rs70bn ($1.04bn).