At the opening of the second China International Import Expo, President Xi Jinping says the government will continue to cut tariffs and speed up trade negotiations with foreign partners. He also reiterates that the country is against protectionism and unilateralism

China’s leader said the global value chain and supply chains are now highly intertwined, while the economic integration between nations is an irreversible trend 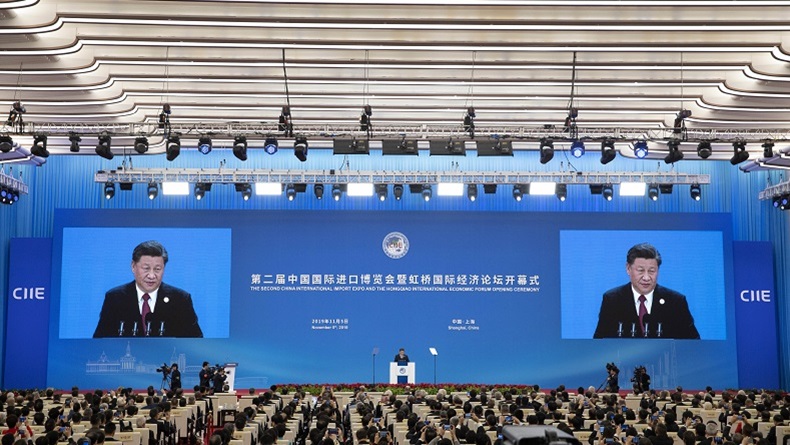 Source: © AP The Chinese president said the country would continue to open its markets and increase imports.

PRESIDENT Xi Jinping said China will continue to open its market and increase imports, as the world’s second-largest economy is locked in a trade war with the US and encountering slower growth.

“We have a population of nearly 1.4bn with the world’s largest middle class and a huge market. I welcome everyone to have a look here,” he said at the second China International Import Expo in Shanghai.

Mr Xi pledged last year said the country’s imported goods and services would reach $30trn and $10trn, respectively, during the next 15 years, up from $1.7trn and $450bn in 2017. The target, however, was not mentioned this time.

China’s imports contracted by 0.1% based on Chinese yuan terms in January-September 2019, dragged down by slack domestic demand. Its economic expansion hit a 30-year low of 6% in the third quarter of the year. The lacklustre performance has also added to concerns in the shipping industry regarding weakening cargo growth.

To facilitate foreign trade, Mr Xi said the country will carry on with the pilot free trade zone projects, with efforts to implement the expansion of the Shanghai FTZ and to speed up the plan to build Hainan province into a free port.

Meanwhile, he reaffirmed that China is a proponent of better international co-operation and multilateralism, including necessary reforms of the World Trade Organization.

The 15 member states of the Regional Comprehensive Economic Partnership completed negotiations on Monday in Thailand and are expected to sign a deal in 2020.

According to Mr Xi, China is willing to sign more high-level free trade deals with foreign partners and to accelerate talks on the China-EU investment agreement, China-Japan-South Korea free trade agreement and the trade pact with the Cooperation Council for the Arab States of the Gulf.

He noted that the global value chain and supply chains were now highly intertwined, while the economic integration between nations was an irreversible trend.

“Negotiation and co-operation are the right solution to address conflicts. We are firmly against protectionism and unilateralism,” said Mr Xi.

He added that China will keep promoting the Belt and Road Initiative, which has been endorsed by 137 countries and 30 international groups.

Manufacturing shift in Asia poses a conundrum for carriers and ports