‘If the CTU code became mandatory I think we would have a better opportunity to follow up after incidents and in the long term educate to prevent future events’ — Uffe Ernst-Frederiksen, head of cargo management, Maersk Line 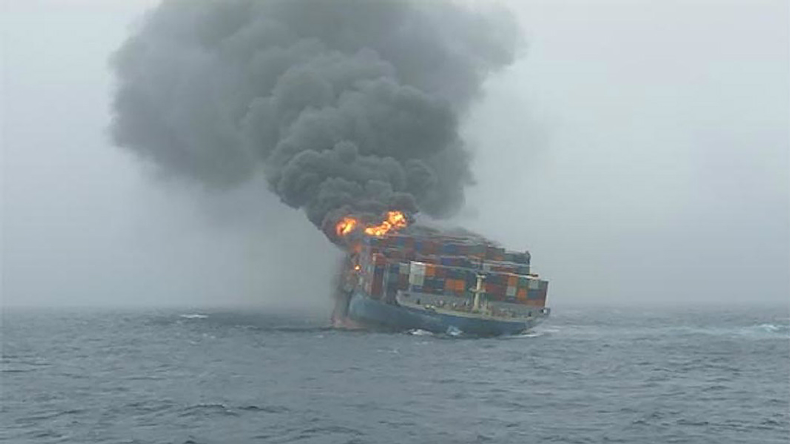 Incidents in 2019 have included high-profile fires on APL Vancouver (pictured), Yantian Express, E.R. Kobe, KMTC Hong Kong, and the sinking of Grimaldi’s Grande America, among others.

SHIPPERS must take more responsibility in mitigating the malpractice of cargo misdeclaration, which has led to an increasing number of containership fires over the past year.

This was the overwhelming consensus of both panel members and listeners of a webinar hosted by Lloyd’s List and sister publication Lloyd’s Loading List in partnership with the TT Club, ‘Clamping Down on Misdeclared Dangerous Goods’.

Containership fires have been firmly in the spotlight off the back of several high-profile incidents, resulting in significant cargo losses and more importantly loss of life. Incidents in 2019 have included high-profile fires on Yantian Express, APL Vancouver, E.R. Kobe, KMTC Hong Kong, and the sinking of Grimaldi’s Grande America, among others.

TT Club risk management director Peregrine Storrs-Fox, who spoke on the panel, noted how there is now a casualty approaching every 30 days, compared to the long-term average of one in 60 days previously. According to the Cargo Incident Notification System, anything up to a quarter of all serious incidents on board containerships are attributable to misdeclared cargo.

“The shipper already has extensive responsibilities around how they're packing the cargo which provides some protection… clearly this is not enough,” Mr Storrs-Fox said.

The Code of Practice for Packing of Cargo Transport Units, a joint International Maritime Organization/International Labour Organisation/United Nations Economic Commission for Europe instrument colloquially known as the CTU Code, has been in place since 2014. However, unlike the IMDG (International Maritime Dangerous Goods) Code, it is not mandatory.

“It does though provide a compendium of information that is necessary for the shipper and indeed all the supply chain stakeholders to take corrective action,” said Mr Storrs-Fox, adding that shippers have a general obligation to follow these industry guidelines under health and safety legislation in many jurisdictions.

In the absence of a regulatory body to enforce these guidelines, fellow panellist Dr Penelope Cooke, a consultant scientist at marine consultancy Brookes Bell, stressed that the responsibility for what is reported to be in the container is correct falls firmly with the shipper.

One issue she highlighted is the poor packing of chemicals, such as calcium hypochlorite, which has been responsible for numerous fires in the past. This she said comes down to the scientific education in the stuffing of hazardous cargoes.

“It also astonishes me how many containers leak, which means the internal packaging has had a fault in some way. That has to be prevented,” stressed Dr Cooke.

“Informing shippers about some of the more basic things they could do is a critical step.”

Meanwhile, head of cargo management at Maersk Line Uffe Ernst-Frederiksen, who is also serving a second term as chairman of the Cargo Incident Notification System Network, or CINS, said that making the CTU Code legally binding would go a long way to resolving the issue and make shippers more culpable.

“If the CTU code became mandatory I think we would have a better opportunity to follow up after incidents and in the long-term educate to prevent future events,” he said.

“But also being aware of the physical and chemical restrictions needs to be taken into account.”

However, it was not only the panellists who felt strongly about greater shipper accountability with no fewer than 98% of the webinar’s audience agreeing they must do more to ensure containers are stuffed correctly.

Equally they were adamant that the recent measure of penalty charges for shippers falling foul of cargo misdeclaration implemented by carriers do not go far enough.

When polled, more than nine out of 10 audience members said rogue shippers should be penalised more heavily.

Mr Storrs-Fox for one agreed, despite the obvious commercial ramifications and the adverse reaction it may cause among shippers.

Nevertheless, Dr Cooke said that penalties “seem to miss the point”, if you apply them after the event of a fire and discover cargo was misdeclared.

“This comes back to cargo verification. How do you know there's something wrong if you don't check? Without verification, I think penalties are a blunt tool.”

Mr Storrs-Fox pointed out that the penalties would often be levied on the basis of deficiencies found, such as following physical inspections.

Mr Ernst-Frederiksen said that whether penalties will prove to be a deterrent remains to be seen, as this is a relatively new measure, but at the very least such actions have so far helped to spread further awareness of the issue.

A blanket ban for rogue shippers was ruled out by the panel. However, the idea of naming and shaming rogue shippers in a public database or a similar traffic light system, labelling shippers with a red, amber or green light on previous form, was an option to consider, the panel agreed.

“But at the end of the day it always come back to who's going to enforce that,” noted Mr Storrs-Fox.

He did though highlight how increasing inspections could be a way forward.

Mr Storrs-Fox drew on a recent report put before the IMO that showed the disparity between the deficiency rate of containers habitually inspected by the National Cargo Bureau for exports from the US and those examined as part of an initiative conducted by CINS carriers. The difference was stark, he said.

Recalling the results, he noted how those habitually checked by the NCB achieved a deficiency rating of just 7.4%, whereas in the CINS initiative the rate for declared dangerous goods exports was 38% and overall deficiencies found amounted to 59.5%.

“From that evidence, interaction with shippers around education and understanding, which can be across a whole range of different issues concerning the shipment, clearly works to improve safety.”