A conference convened to assess progress in mapping the world’s entire seabed has welcomed advances in technology, in collaboration, and in urgency to understand how oceans are changing

Merchant shipping has a role to play in mapping the world’s ocean floors. The Chairman of Nippon Foundation told Lloyd’s List that understanding the oceans will help to tackle climate change 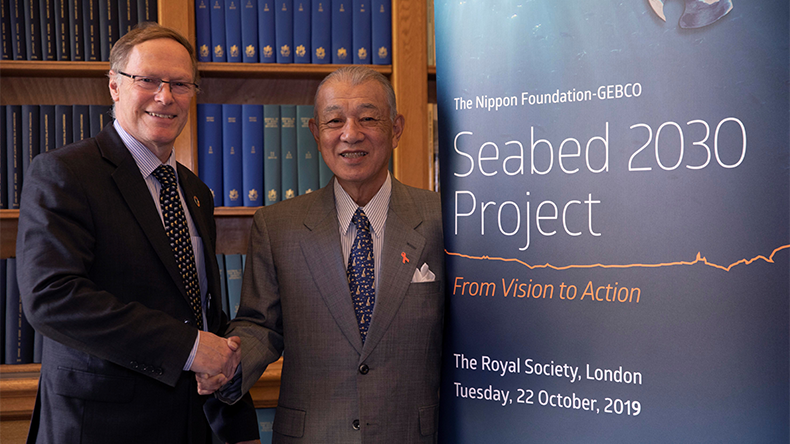 Richard Clayton of Lloyd's List with Yohei Sasakawa, who is urging the United Nations to dedicate an entire agency to the oceans.

THERE are 193 member states of the United Nations but only one body of water linking them all. “This ocean is crying for help,” Nippon Foundation Chairman Yohei Sasakawa told Lloyd’s List this week. “Few experts have heard this cry, even though it is reflected in climate change, acidification, and the loss of flora and fauna,” he said.

Mr Sasakawa was speaking ahead of a Nippon Foundation-GEBCO (General Bathymetric Chart of the Oceans) Seabed 2030 Project conference, entitled ‘From Vision to Action’, in London. The conference was convened to mark progress in the two years since the project was launched.

The Nippon Foundation is a private, non-profit organisation headquartered in Tokyo. It has been working to understand the challenges faced by the world’s oceans since it was established in 1962. Explaining the motivation, Mr Sasakawa said there was a tendency for humans to want to know what was in space “but much less attention is paid to the situation under the ocean surface”.

He continued: “Some 70% of the Earth’s surface is covered by sea, and 70% of that is high seas. We need to set up an international organisation focusing on the sound preservation of the ocean.”

Mr Sasakawa is urging the United Nations to dedicate an entire agency to the oceans, drawing together the many stakeholders currently located within other agencies, from maritime law and fisheries to seabed mining and environmental protection.

The basis for that dedicated agency, he said, is knowledge of the seabed — “the topography of the Earth when all the water is taken out” — its shape and structure, and its resources. “I’m sure [changes in the oceans] are related to the climate change we see today.”

A significant part of this knowledge will come from seabed mapping. Today, only about 15% of the world’s seabed has been accurately charted. Mapping must be done “as soon as possible” because most of the publicly available charts contain “more art than science”. This is the driver for Nippon Foundation’s support for the Seabed 2030 project.

Asked how merchant shipping can help with this project, Mr Sasakawa urged the industry to offer its support by installing high-tech data-loggers on ships to capture as much information as they can about the seabed. The technology will also be placed on deep sea fishing and leisure vessels. So far, he said, the International Maritime Organization has not given its backing to the project.

Mapping of remote areas is being tackled through the development of autonomous underwater vehicles kitted out with multibeam echosounders, while Royal Dutch Shell, the energy major, has supported a competition to map the topography 4,000 metres below the ocean surface: the competition was won by GEBCO.

Many universities and research institutions have proprietary data, which is being fed into the Seabed 2030 project. Further progress can only be achieved “through co-operation and collaboration between scientific research institutes, private organisations, and industry partners on an unprecedented scale,” Mr Sasakawa urged, adding that “people think that use of the ocean is free of charge”. Now “everyone who travels, explores, or uses our oceans has a role to play and can benefit from this initiative.”

Since the launch of Seabed 2030 in 2017, there has been a doubling of the bathymetric data available — an increase equivalent in size to the landmass of the entire African continent.

“A complete map, accessible by everyone, anywhere, will be an invaluable tool in the global effort to protect our oceans for generations to come,” Mr Sasakawa concluded.