The Global Maritime Forum is meeting to seek solutions for a safe, clean, and efficient industry ​ 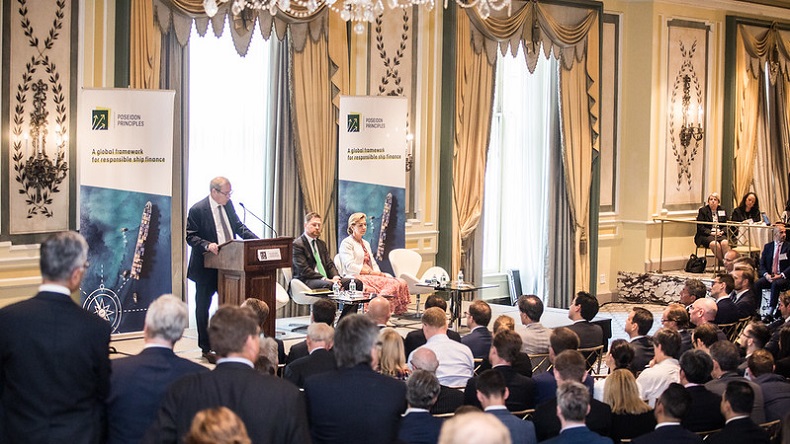 Source: Global Maritime Forum The opening presentation for the Poseidon Principles, at the 2019 Marine Money Week.

MARITIME leaders are meeting to address some of the biggest challenges facing shipping, having chalked up some considerable successes over the past 12 months.

They will hear that the industry is relatively unprepared to cope with many of the issues that could impact shipping over the next 10 years, with details due to be released in the Global Maritime Forum’s 2019 monitor in Singapore this week.

The Global Maritime Forum, a not-for-profit organisation dedicated to shaping the future of global seaborne trade, will focus on safety, skills, climate change, and sustainability at its two-day meeting which is regarded as shipping’s equivalent of the World Economic Forum.

Since the inaugural summit in Hong Kong last year, the forum has made real progress on ship emission reduction targets, bank lending principles, and nurturing talent.

That in part reflects the fact that many of the sessions are conducted on Chatham House rules, enabling participants to talk frankly and openly behind closed doors, before coming to some firm conclusions.

A working group has developed a set of guidelines and principles that will be presented this week by Grahaeme Henderson, vice-president shipping and maritime at Shell, and Graham Westgarth, chief executive of V. Ships.

After the call to action on decarbonisation, it also announced the Getting to Zero Coalition at the UN Climate Action Summit in New York in September.

The coalition is an alliance of 70 companies within the maritime, energy, infrastructure and finance sectors, supported by key governments and intergovernmental agencies, which have set a mutual goal of developing commercially viable zero emission vessels for the deepsea trade routes by 2030.

The forum, which emerged from the Danish Maritime Forum, will hold a discussion at the end of the summit to decide on the next steps and how to put ideas and visions into action plans.

The ultimate aim, it says, is to “unleash the potential of seaborne trade and increase sustainable long-term economic development and human well-being”.