Not a subscriber?
Find out about tailored subscription packages:
T: +44 (0) 20 3377 3792
E: subscription.enquiry@lloydslist.com
Sign In
New to Lloyd's List? Register for our free email digests:
Register
Tags:
Tankers and Gas Finance

Rates have soared since September 25, after the US government sanctioned two tanker subsidiaries of China’s Cosco for shipping Iranian crude in violation of unilateral sanctions 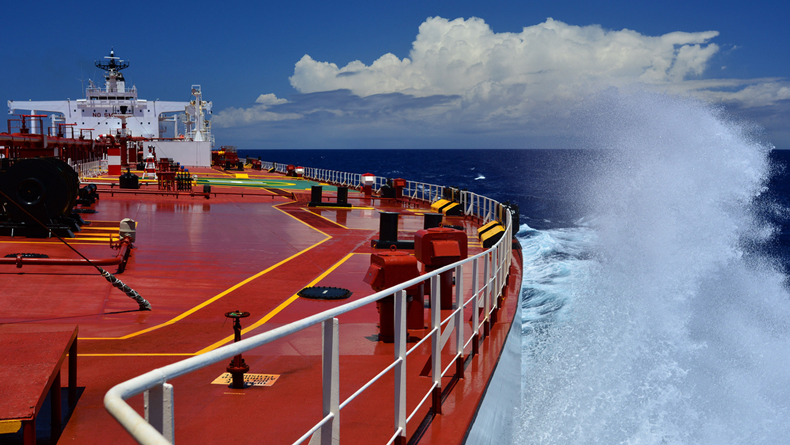 Source: G-Valeriy/Shutterstock.com Average VLCC time charter rates climbed from $18,284 daily on September 25, to peak at more than $240,000 daily on October 11.

RATES for the largest crude tankers have tumbled, snapping a run of stratospheric gains over the past three weeks as some of the highest-profile fixtures failed for vessels chartered at rates exceeding $300,000 per day.

Earnings for very large crude carriers on routes to Asia from the Middle East Gulf plunged the most, Baltic Exchange data showed. The daily rate for Saudi Arabia-Singapore oil shipments declined by nearly $90,000, retreating to more than $204,000 per day.

Similar falls were seen for VLCCs to China from Saudi Arabian ports, which lost more than $87,000, settling at nearly $201,500 per day, according to the London-based provider of freight indices. VLCC rates to China from West Africa, which had nearly nudged $300,000 as well, also showed large falls, dropping below $190,000 per day.

Suezmax rates showed much smaller and less dramatic drops, falling between 17% and 25%, while aframax earnings continued to rise, reflecting the trickle-down impact of the recent heat on the larger tanker sizes.

Shipbrokers attributed the collapse to lower-than-expected levels for fresh fixtures concluded today for West Africa cargoes. These were done 30 to 40 Worldscale points lower than expected. This flowed on to rates for the Middle East Gulf, resulting in fixtures agreed last Thursday to fail. Such an earnings disjoint between West Africa and the Middle East Gulf could not be sustained, brokers reported.

“It was always going to be a case that the market was overdone,” one broker told Lloyd’s List. He anticipated this to flow through to the smaller tanker sizes in the next 48 hours. Very few cargoes were worked in the market on Friday and Monday, and those arriving on Tuesday are attracting the much lower rates.

Crashing rates came after three of the highest-profile fixtures concluded at 15-year highs on Thursday and Friday failed on subjects. The deal between the owner of 2017-built VLCC Ardeche chartered to load 270,000 tonnes for ExxonMobil from the Middle East between November 3 and November 5 failed, according to information from tanker pool Tankers International. The Worldscale rate of 325 equated to just under $300,000 daily.

Another fixture reported on Friday for oil company Shell’s shipping subsidiary Stasco also failed. The VLCC Front Endurance was loading around similar dates from the Middle East Gulf at earnings equivalent to nearly $230,000. The vessel Evgenia, taken by BP, also failed at earnings of $235,000 daily.

By contrast, Tankers International reported VLCC tonnage to have been chartered on October 15 at slightly lower levels, with Middle East Gulf-West Coast India earnings now at $210,000 per day.

News of these failed fixtures has tanker owners, oil companies and refiners closely watching the remaining VLCCs provisionally chartered at sky-rocketing levels. The 2012-built VLCC Ingrid, whose Middle East Gulf-Japan fixture broke the $300,000 barrier, is still show that it is on subjects, five days after it was provisionally chartered.

Rates had soared since September 25, after the US government sanctioned two tanker subsidiaries of China’s Cosco for shipping Iranian crude in violation of unilateral sanctions. Oil companies feared chartering vessels connected to the sanctioned entities or those which had called at Venezuela, another country sanctioned by the Trump administration.