The founder and chairman, his group president son and chief financial officer daughter are among those who run one of the world's biggest shipping conglomerates 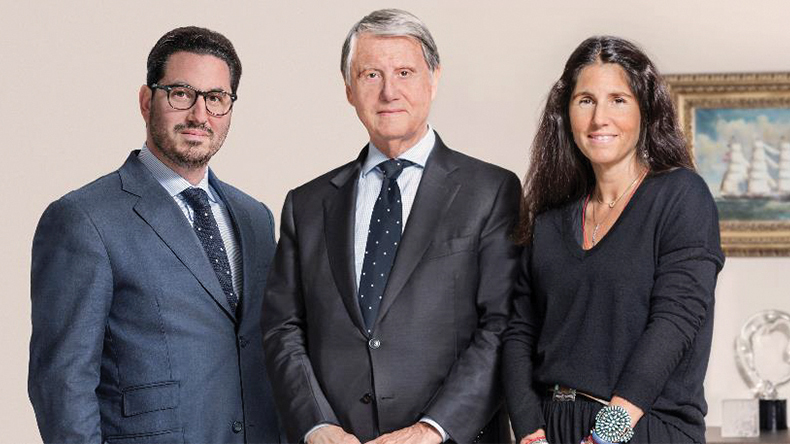 Source: MSC Aponte family: from left, Diego, Gianluigi and Alexa are widely regarded as among the most successful families in shipping.

The container shipping, ports, logistics and cruise group owned by the Aponte family is taking delivery of a series of boxships that are the largest on the high seas in terms of capacity — at least for the moment.

During the summer, MSC Gülsün, the first of an initial series of 11 vessels, joined the MSC fleet and immediately entered the record books with its declared nominal intake of 23,756 teu.

At 400 m in length, width of 60 m and incorporating many innovative design features, the South Korean-built ship sets new standards on many fronts.

Sisterships MSC Samar and MSC Isabella have since joined the fleet, while in October, MSC declared options for another five of the same specification.

However, this is not what grabbed the headlines towards the end of 2019.

The company pulled off an extraordinary coup when the Apontes persuaded Søren Toft to leave Denmark's AP Moller-Maersk, where he was chief operating officer and a member of the executive board, and join MSC as chief executive in charge of the group’s container shipping and logistics businesses.

He will report to MSC’s founder and chairman Gianluigi Aponte and his son Diego, the group’s president.

Mr Toft will be focusing on cargo operations, but the Aponte family has many other maritime interests.

On the cruise side of the business, MSC Cruises took delivery in February of the 171,600 gt MSC Bellissima, with capacity of 4,500 passengers, as the MSC group continued to expand this side of its shipping empire.

MSC Cruises is now the world’s biggest privately owned cruise company, having achieved 800% growth in its first 10 years. Its fleet currently consists of 16 cruiseships, with plans to expand to 25 vessels by 2027 under a €11.6bn ($12.8bn) investment plan.

Over the years, MSC has diversified its cargo activities to include overland transportation and logistics services, as well as port operations, as container lines seek to provide a complete range of door-to-door services for customers.

On the ports front, MSC's Terminal Investments Ltd arm is in the process of forming a joint venture with Peel Ports covering the Liverpool2 terminal on the Mersey, which has struggled to attract customers.

TIL now has a portfolio of 54 terminals, while the logistics unit MedLog is present in more than 60 countries.

This is now the second-largest in the world, after that of 2M alliance partner Maersk, with a portfolio of around 560 owned or chartered vessels adding up to 3.7m teu, carrying 21m teu of cargo a year, plus a sizeable orderbook.

The Aponte clan, which has built up this huge shipping empire, is widely regarded as among the most successful families in shipping.

Gianluigi Aponte remains at the helm, supported by Diego Aponte, daughter Alexa Aponte-Vago, who is the group’s chief financial officer, and her husband Pierfrancesco Vago, the executive chairman of MSC Cruises.

Headquartered in Geneva and still relatively media-shy despite the lavish spectacles of its cruiseship naming ceremonies, the MSC group is nevertheless an active force behind the scenes on a range of issues of concern to the whole shipping industry.

These include moves to develop digitalisation standards, plus efforts to improve safety and numerous clean shipping initiatives.

MSC has joined several other lines in ruling out the Northern Sea Route as a shortcut between Asia and Europe because of the environmental harm it would cause to the fragile Arctic ecology.

To help tackle climate change, MSC has also retrofitted more than 250 ships in its existing fleet with the latest green technologies, cutting about 2m tons of carbon emissions each year as it takes action in support of the International Maritime Organization’s 2030 decarbonisation target.

The group will mark its 50th anniversary in 2020 when it will be able to reflect on the half century since Mr Aponte Sr, a former sea captain from Sorrento in southern Italy, started out with a single ship, MSC Patricia.