According to Braemar ACM, charterers have replaced at least two Cosco VLCCs to load crude in the Middle East Gulf, while two in West Africa, one in the US Gulf and another suezmax have also been substituted.

BUNKER suppliers, banks, marine insurers, charterers and port states have rushed to reassess and reduce exposure to Chinese government-owned shipping giant Cosco, in the wake of unilateral sanctions imposed by the US.

Contagion fears have charterers looking beyond the two subsidiaries when excluding tonnage, given the opaque ownership structure of the parent company Cosco Shipping Corporation. The state Chinese behemoth beneficially owns more than 1,000 ships and has the world’s largest fleet of dry bulk carriers and containerships.

“The Cosco parent company is not subject to sanctions and dealings with that company and its other subsidiaries are still theoretically permissible,” said James Treanor, a Washington DC-based attorney with Cadwalader, Wickersham & Taft who specialises in sanctions.

“It is only these entities, and their majority-owned subsidiaries, it is not the parent company. That was intended to give a little bit of comfort to the industry. It may not have been received as such, because as is often the case, the devil’s in the detail,” he told Lloyd’s List.

“I am sure that Ofac statement (on clarifying the parent company position) was appreciated, but there’s all kinds of ways that I think companies — whether it is insurance, financial institutions, counterparties and charterers could still run foul of these new sanctions either wittingly or unwittingly.”

Charterers have replaced at least two Cosco VLCCs to load crude in the Middle East Gulf, while a further two in West Africa, one in the US Gulf and another suezmax have also been substituted, said London-based shipbroker Braemar ACM in a note to clients on Friday. 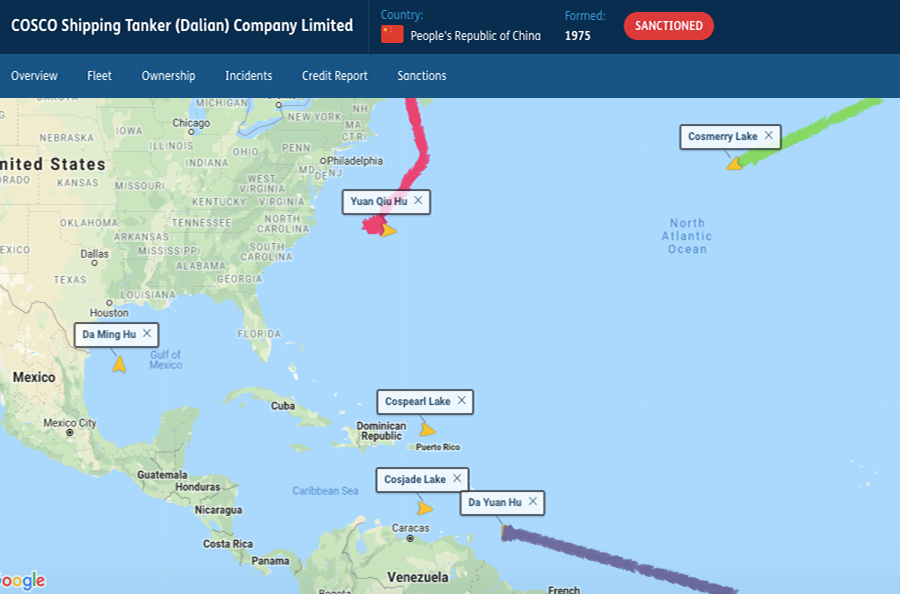 The VLCC Yuan Qiu Hu diverted from the US east coast over the weekend, while Cosmerry Lake, another company VLCC heading for the US Gulf, slowed speed mid-Atlantic amid broker reports charterers were going to replace it.

It was also uncertain whether bunker suppliers will supply vessels connected with the Cosco entities, as transactions in US dollars could leave companies with the risk of being subject to secondary sanctions. These vessels would now show in bunker suppliers’ risk profile checks, a senior bunkering executive told Lloyd’s List.

The decision on whether to extend credit and services would be for the individual supplier. The punitive secondary sanctions on Iran can be imposed on anybody who is a non-US citizen who is “knowingly providing significant financial, material, technological, or other support” to activities or transactions that benefit the energy, shipping or shipbuilding sectors of Iran, according to section 1244 of the Iran Freedom and Proliferation Act of 2012.

The International Group of P&I Clubs, whose 13 members provide cover for 90% of the world’s commercial fleet, is among those providing cover to the Cosco fleet.

International Group of P&I Clubs’ Nick Shaw said the group had no comment on the situation.

Terms of the group’s cover retrospectively invalidate P&I cover if the vessel is carrying sanctioned cargo. That potentially leaves tankers now uninsured at ports and mid-voyage while alternative cover is secured from an insurer prepared to risk secondary sanctions.

“The challenge is that the implications (of the sanctions) are unclear, because for all the guidance that Ofac has released, and there has been some, they have not been crystal clear on where exactly the lines might be might be drawn in some of these cases,” said Mr Treanor.

“So, I think that is why you're seeing a very cautious approach. What we could see soon, or in the not too distant future, is some additional guidance as OFAC answers specific questions and very practical questions from the industry. Historically they have come out and issued additional guidance on certain issues.”

Cosco is now under pressure to define its complicated  ownership structure in which the two blacklisted units remain subsidiaries of Shanghai and Hong Kong-listed Cosco Energy Shipping Transportation. Trading resumed in CEST today after it was suspended after Ofac sanctions were announced.

The entities were penalised by the US after investigations disclosed they operated tonnage that formed part of a subterfuge fleet of Chinese and Iranian-owned tankers and gas carriers. An established logistics network used ship-to-ship transfers and turned off AIS signals to obfuscate the origin and destination of sanctioned cargo en route to China from Iran, first reported by Lloyd’s List in March.

Cosco changed the ownership structure of both subsidiaries in June to cut ties with Kunlun Holdings, another of the companies named by OFAC last week for owning tonnage in the subterfuge fleet.